I am a big believer that things happen for a reason, sometimes a door opens for us and other times a door is closed, I believe there is a Higher Hand that is in charge of these doors, today a door closed, (pity it closed after we loaded the bikes onto the boat and not before we loaded them.) The Cuban part of this trip is off, “it aint happening no more” as they say here.  But more about that later.

We started the motors at 6h30 before the sun was up and Started heading South. Everyday we find a lot of Road-kill in the road, mostly Possums, (a type of large rodent that has a straight tail, but it is large, much bigger than a cat,) we once had a Beaver in the road and a snake and many  weasels and frogs and mice, but today we had an alligator that was run over. 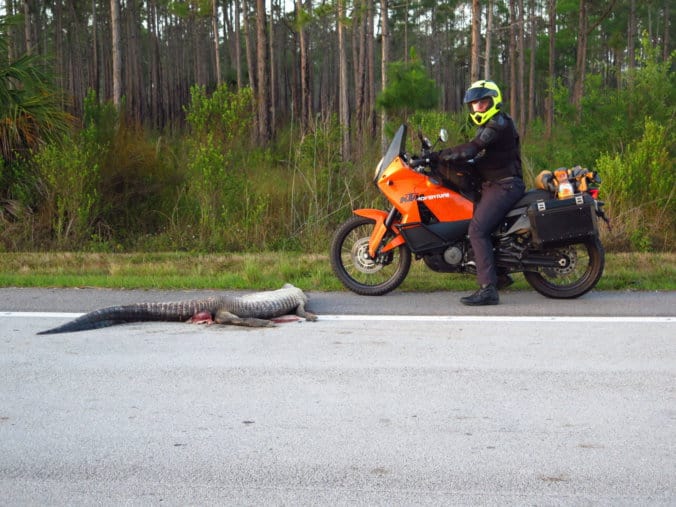 We turned right off the road onto a road called Alligator Alley, which was the 1st time these new bikes has been on gravel, and it took me a while to work out how to change the ABS settings and switch around from Street Mode to Off Road Mode on the Traction Control, but soon Dad-Ass was running on the hard gravel at speed. Here are some photos I took of the guys having some “dusty-fun”. 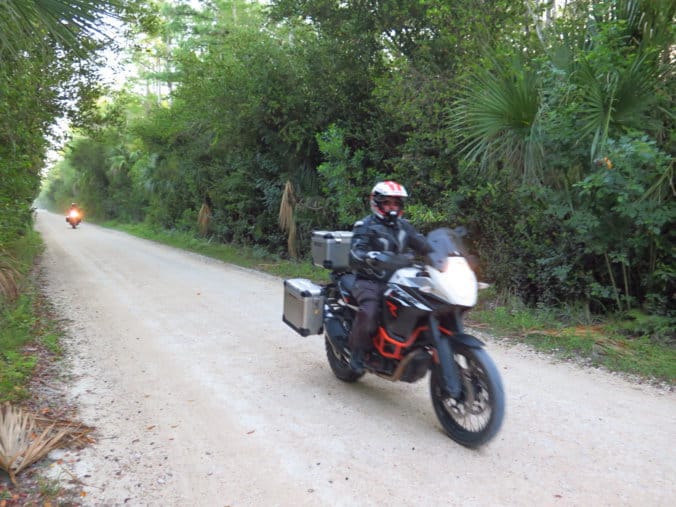 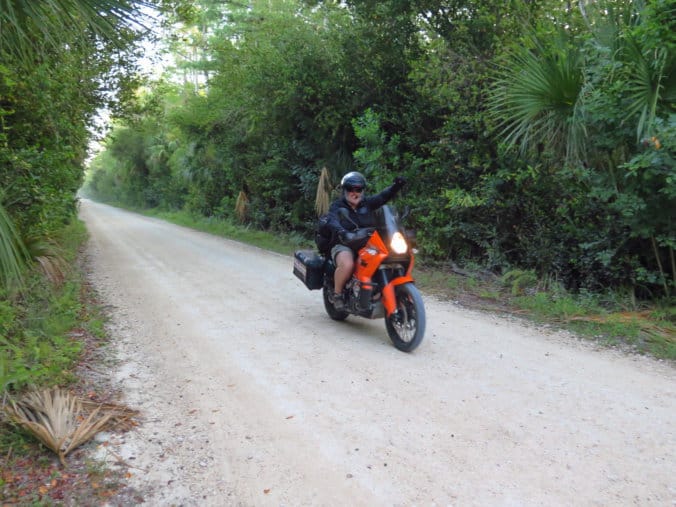 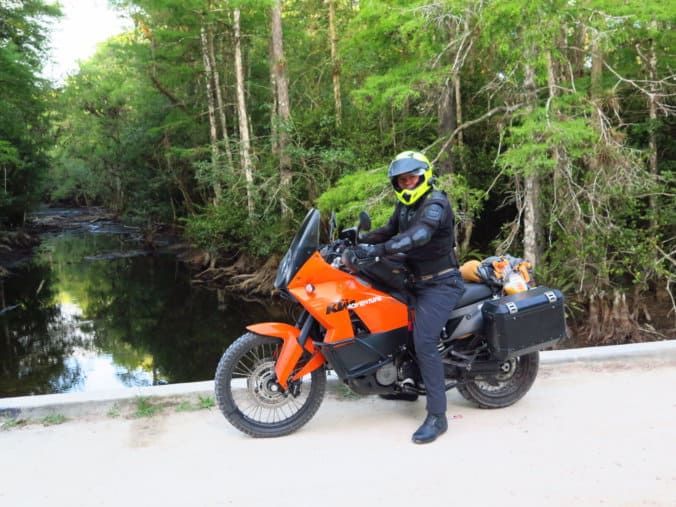 There’s water on both sides of the road, not deep but the water is clear and at one of these spots Peens counted 30 Alligators, just their heads sticking out above the water. 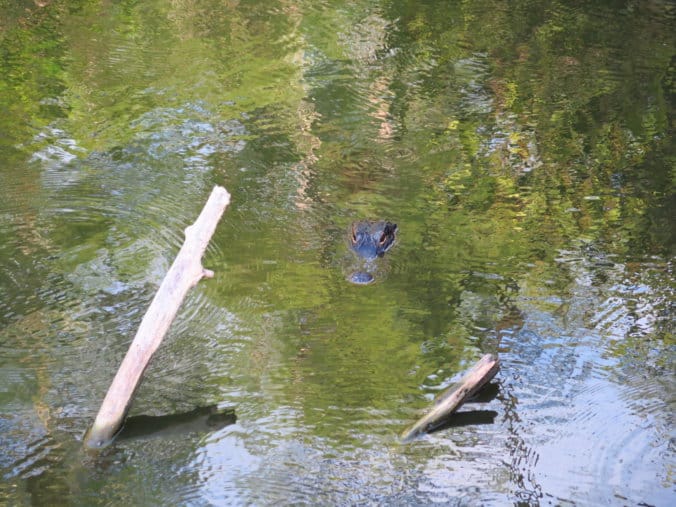 I slowed down after seeing this, can you imagine falling off on the gravel and then sliding into a pond filled with these Gators? 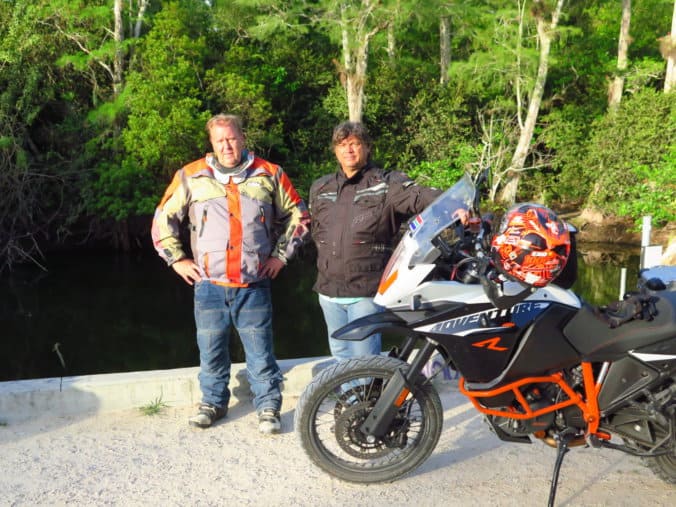 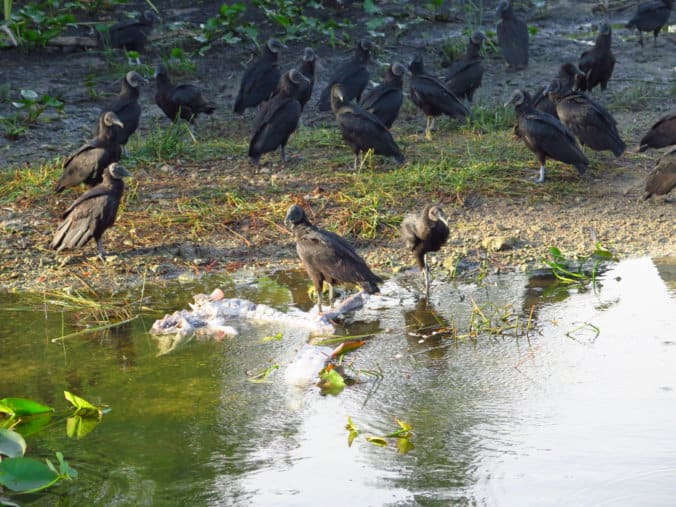 We found these birds, (almost like a crow, but bigger) feeding off the carcass of a dead Gator. 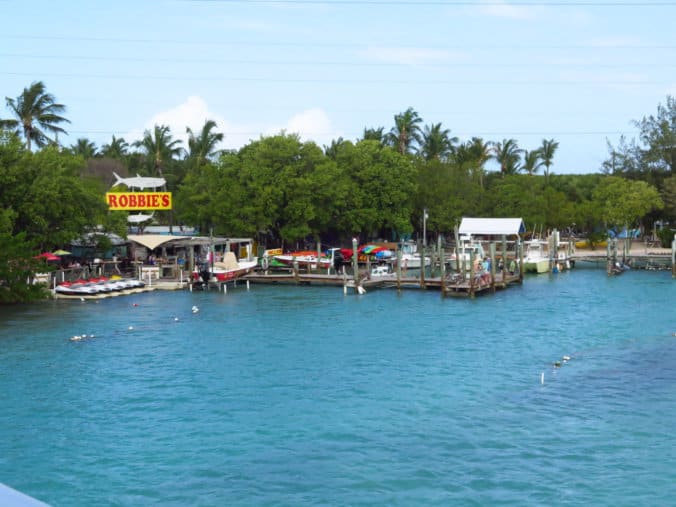 We rode to the 1st of the bigger islands called Key Largo, (the Keys are a string of small patches of land that are all connected with several bridges, the longest being just over 10km long, but several smaller bridges of 3km and 4km long, and at the end is the biggest island called Key West.

The water is very clear, (this is also the start of the Caribbean.) 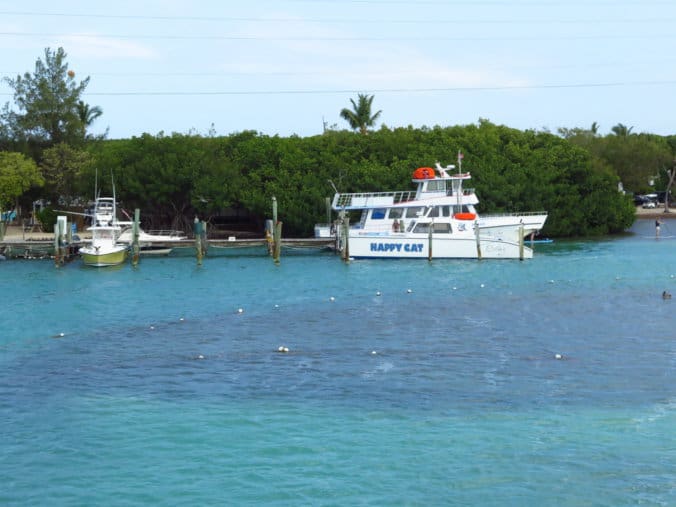 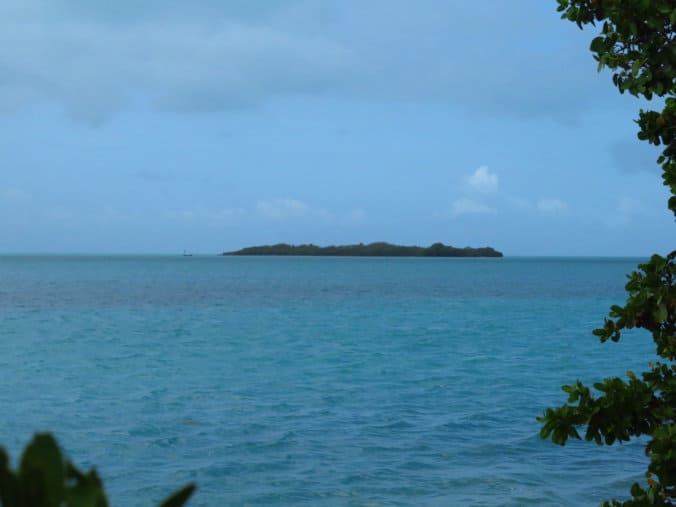 For every car one see on the road I believe there was a boat either standing next to the road or lying in the docks and moorings along the way, there are hundreds of the same boats being sold in large Boat Dealers Yards. Others are stored for their owners in “shelves like this, some double this height. 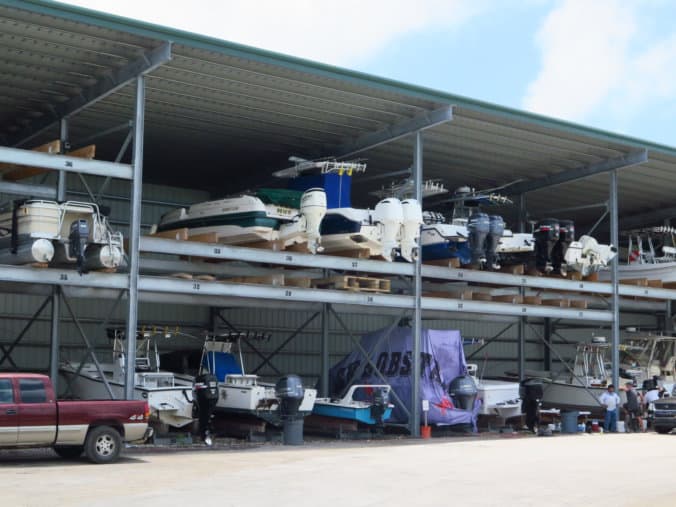 We then rode to the boat that we had booked to take us to Cuba. It was not as big as I had hoped but the owner and captain and a third helper was there to meet us. They were all friendly and very likable. We agreed to return to start loading the boat later in the afternoon. Peens went in search of Pawn Shops to buy good quality 2nd Hand fishing gear, plus some food and beers for the trip, he even bought a cooler-box.

The rest of us went to the Key-side for something to eat and then we played Tourist. We went to the Route Marker for Route One North, where the route starts. 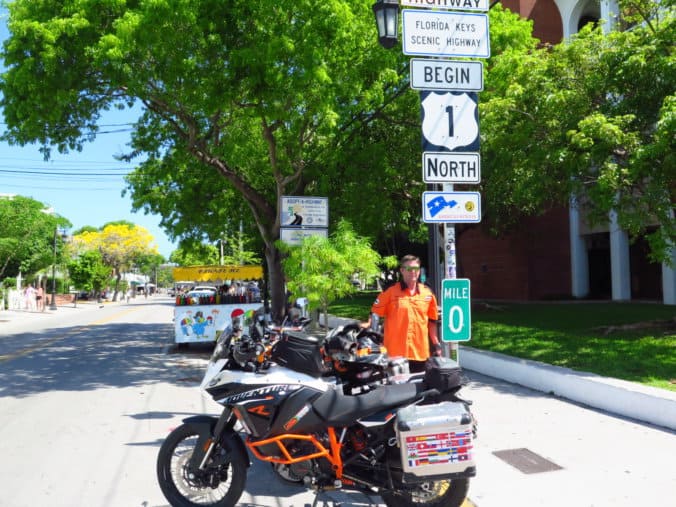 Then we were off to the most Southern Tip of the USA where we found a long line of people patiently standing in the hot sun waiting for their turn to pose for a photo in front of the Buoy. We took the photo with it in the back-ground. 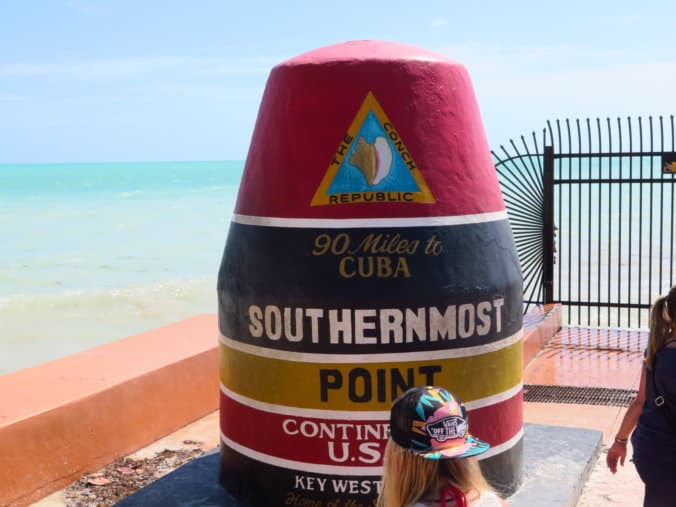 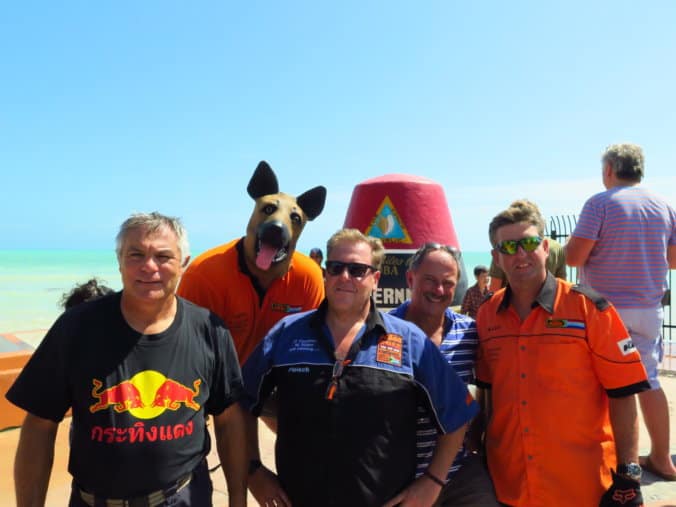 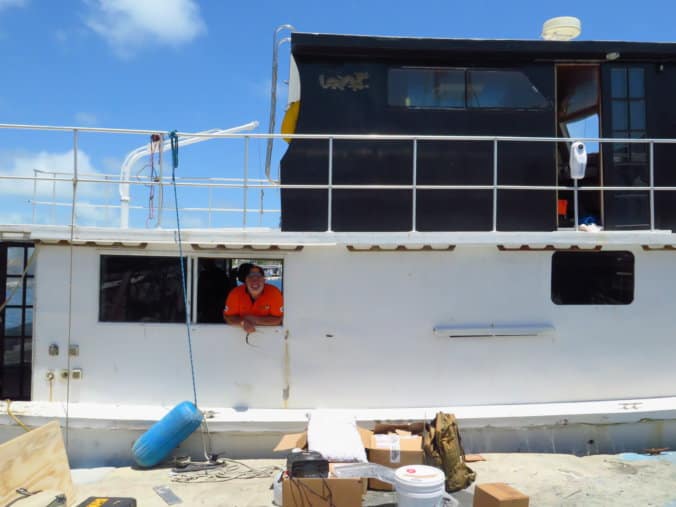 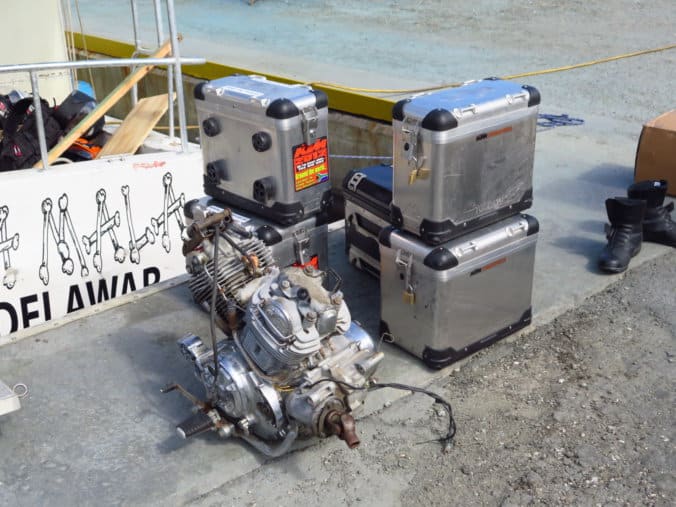 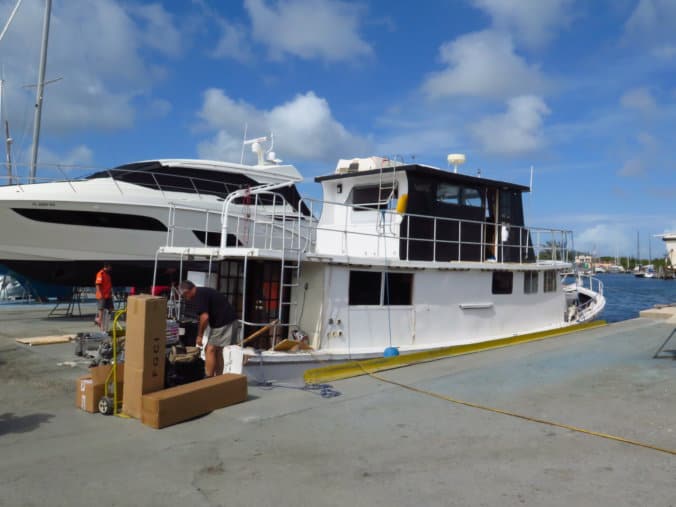 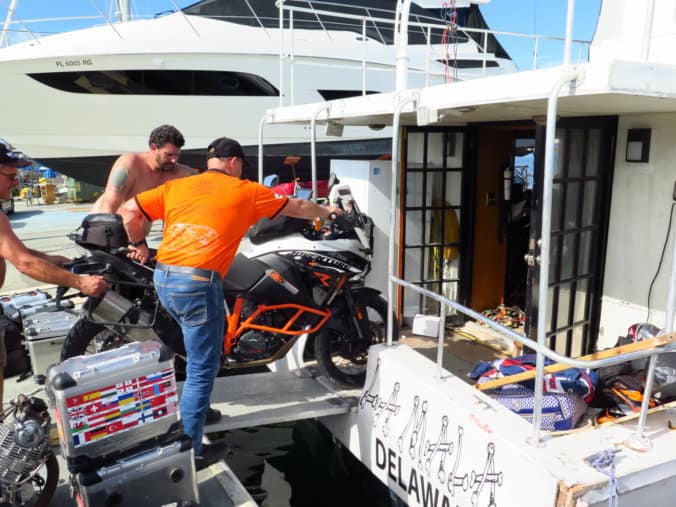 Four bikes were tied-down at the bottom, the other three were going to be hoisted onto the roof. 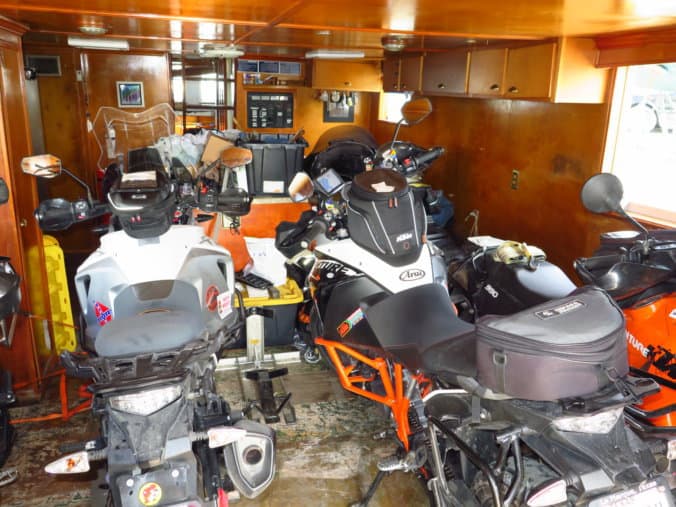 But before we loaded the rest of the bikes we went to the Customs at the airport to have our Passports stamped, but they were closed. We were told that it could be done over the phone bu phoning through the Passport Numbers and then Customs could come and check at the dock’s before we sailed. The original plan was to sail at 18h00, but the weather window would be at its best if we sailed at 2h00, so there was enough time for somebody to come and stamp them should they wish. But when we got back to the boat there was a policeman from Homeland security who was in a foul mood and told us that he was there to warn us that the vessel our bikes were on was not licensed for commercial purposes and that there are a few “un-resolved” custom issues with the boat and should we wish to sail on it that the Coast Guard will be instructed to seize the vessel and all its cargo and detain all the people on board should it try and leave USA waters. This guy was a real twit, he freaked out when Dog put his hand on his car, and then when Dog did it again later in the conversation he wnet into some police-stance and wanted to draw his weapon, ??? what a complete idiot. Then Dog took out his police badge and showed it to the guy who said he was not interested in looking at the badge. Then Dog insisted they have chat, which they did, and then he warned us again and got into his car and left. So after a few discussions with the owner of the boat and his captain, (who looked like a pirate, we decided to un-load the bikes of the boat and try finding another way to get the bikes there. 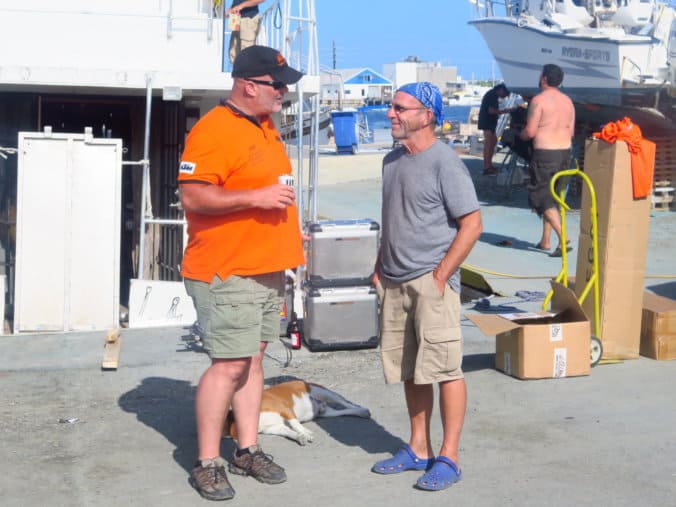 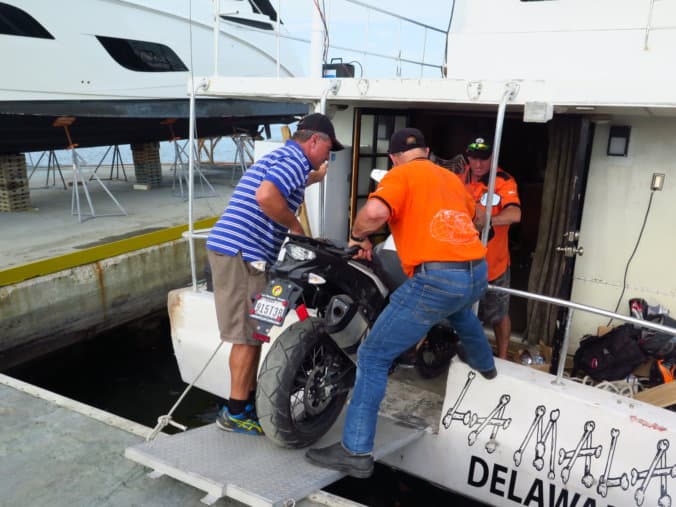 Here Tex’s bike is coming off.

It would have taken 12 hours to sail across. There was a toilet on-board and a few cabins. 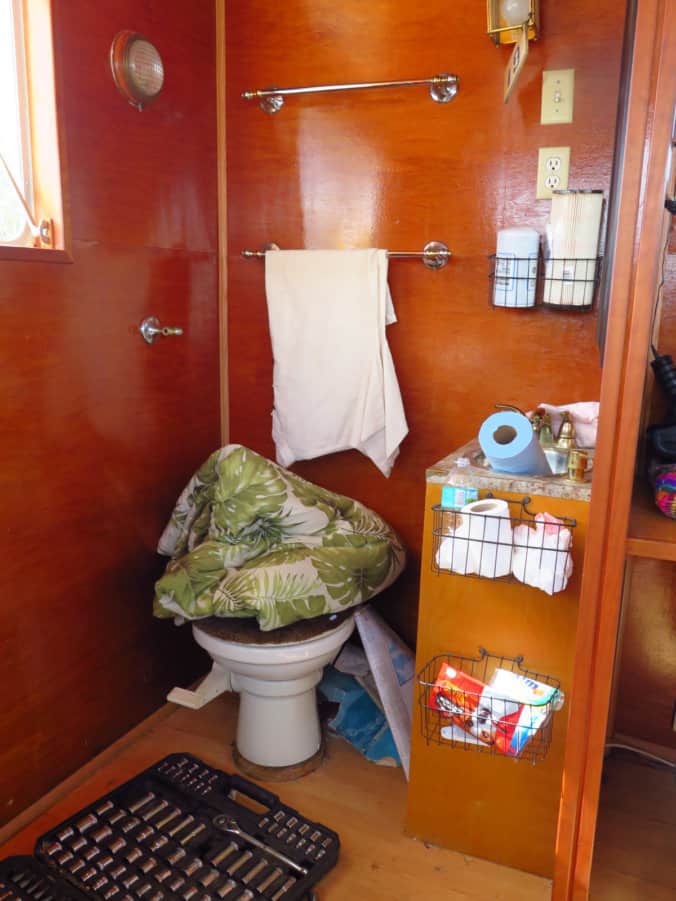 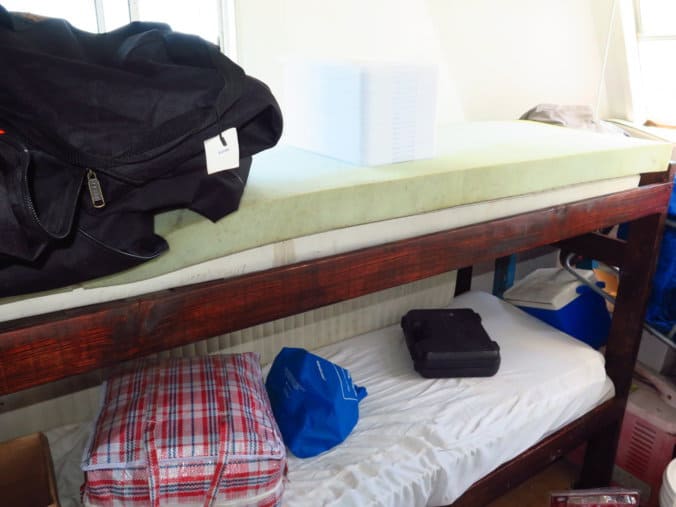 We discussed the matter at length over a few beers, some calls were made and we waited for any alternative, but there was none, so tomorrow we will play tourist and I hope to go and do a few dives. Peens is going to jump on his bike tomorrow morning at 2h00 and ride all the way to Miami, about 3 hours from here to catch a plane and fly to Cuba to be with his girlfriend who is currently cycling on the Island. 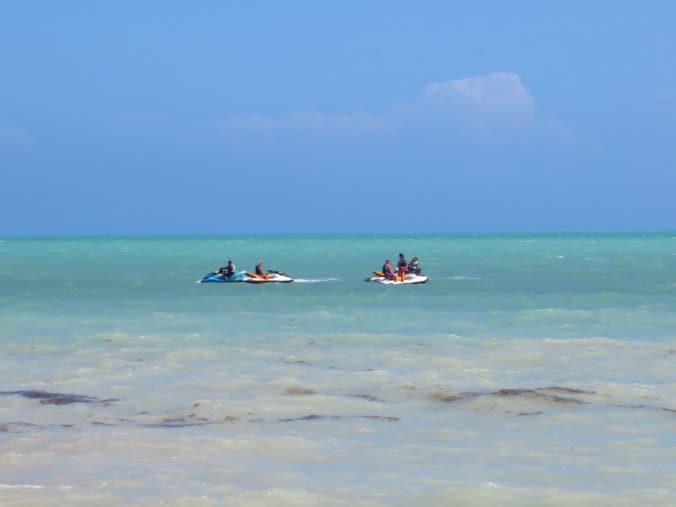 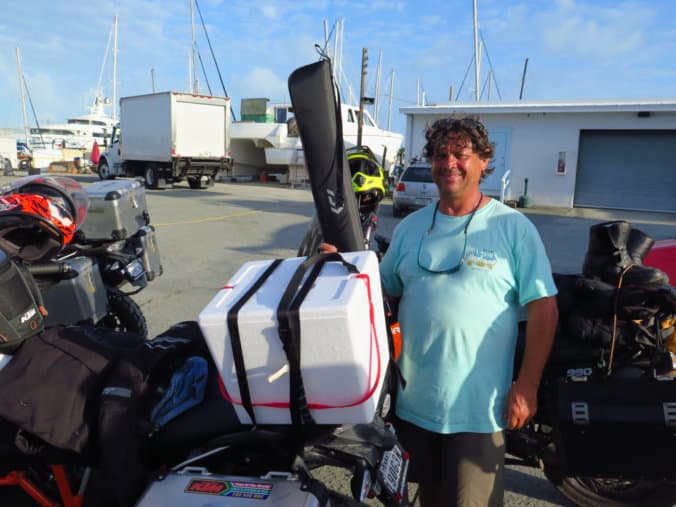 I saw this All Terrain Vehicle in the Everglades. 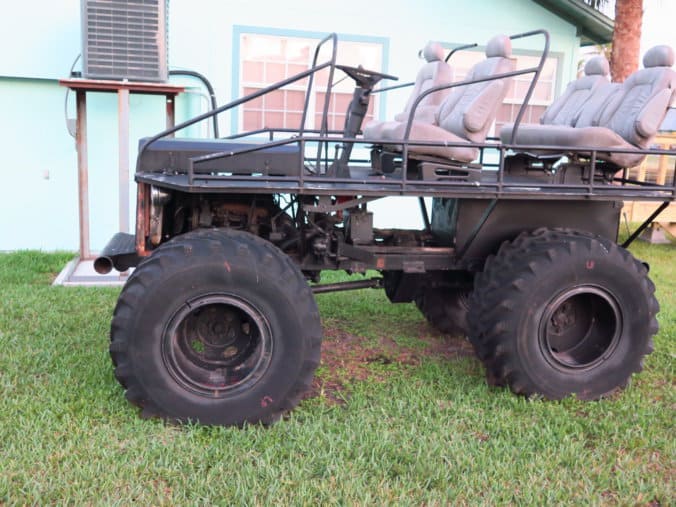 So close !!! But I have to say that the owner of the boat was just as sad about this cancellation and he apologized non stop. Him and his crew are good people and until there is a proper ferry introduced between USA and Cuba, there is no legal way of getting bikes across, we tried and failed. But as they say, it is better to try and fail than not to try at all, (and in this case,  it is better to try and fail than maybe have to swim.)

We have a few extra unplanned days now, so after being tourist in Key West for a day or two, we hope to start heading North again, back into the Everglades where we will be able to do an Air-Boat Ride on the swamps and also go to visit an alligator farm and see an alligator show, (the lady apparently sticks her head inside the open mouth of a very large alligator. Then we will start riding up the coast past Miami and see where the road takes us.