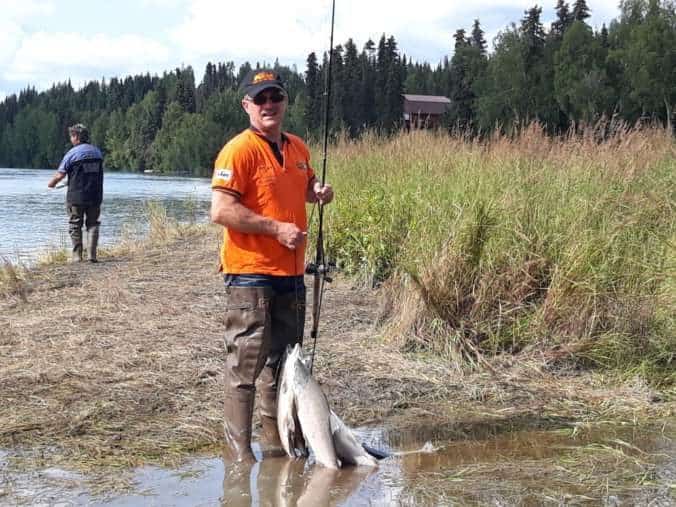 Last night we had a Braai with the fish Peens had , he hired a house for us opposite the Hotel in which the “Bikers For Love” stayed.

This morning we left and we arrived at the train-tunnel, I got off and walked to the tunnel, there was no cars cominh out, only a Red-Light telling us to wait. The next moment a Pappegaai came racing out of the tunnel and told me that they saw me on the video from the other side that I walked up to the tunnel, and that the police was going to give me a ticket when we get to the other side as there was a sign saying no one could pass a certain point. I started speaking Afrikaans and smiled and pretended to be interested in his vehicles’s sticker and he soon realised I cant speak English, so how could I ever have read the sign, he radioed the police on the other side and told them I was a stupid tourist and they should not give me the fine.

The group split in two this morning, the “Bikers For Love” and their dog left for Anchorage and Peens, Rocky, , and I continued in the direction of Homer (famous for the Port where the Crab Boats from TV’s “Deadliest Catch” are based. The scenery road was stunning, as usual.

We arrived at our little town called Cooper and then looked for a Fishing Guide to go Salmon Fishing. We had to meet the guide and his boat 30 miles further along the road (downriver from Cooper Landing.) Our guide Rodney was not happy when we parked close to the Jetty, it was not allowed, even though there was no parking availabe as I counted 40 Vehicles and boat trailers parked in the parking area. We eventually had to park far from the jetty and get changed in the bush.

We jumped on the boat, got dressed in our Waders and went up-river to fish. We were successful. But half-way through our 4 hour fishing adventure Rodney asked if we had our newly issued Fishing License withus, I told him mine was at my motorbike, drama, drama, it had to be on me and he could not leave the others to continue fishing and take me back to the bike as that was not allowed. After some negotiations he left the others to fish and took me back, and I then discovered that Waders are not designed for walking to the bush and back as I am now the proud owner of legs that are scratched to shreds (dankie Mozzie’s) and now have two XL-Blisters on my feet to match my damaged legs.

It is a strange system they use here, we had to pay $25-00 for a fishing license and there are many rules as to when the fish can be kept, (we caught 8 fish in total and had to throw back another 8.) But the local Inuit people don’t need a license and they don’t catch with a rod, they use nets and something called a “Fish-Wheel” which is a wheel turned by the river’s flow that scoops up the fish and harvests it for them in large numbers.

But the Department of Fisheries has a system that works, they open and close the fishing season at different times, depending on the count of all the fish entering all the different rivers. And then there are the large fishing boats that have a quota that fish in the ocean near the river mouth, and let’s be honest, there is no way the local nuits with nets can get even close to the amount of fish taken by the large fishing boats.

But today it all went Pear-shaped: We doubted KTM would deliver on their promise and have the Chain & Sprocket for Dog’s bike in Anchorage on time. So we asked Roger,( the replacement for Rocky who is flying back tomorrow evening,) to bring us a new set of chain and sprockets from RSA, (Roger is a Pilot from RSA that we met at Oshkosh last year,) and he is going to take over and ride Rocky’s bike back to Seattle. So we agreed that we should all meet-up tomorrow in Anchorage and then ride to Tok together, but now KTM did make good on their promise and Dogs Bike was fixed today, but now Dog, Pie and Tex have started riding to Tok at 18h00 today, Tok is 500km from Anchorage.

We just heard that Roger’s flight is delayed, so he is only landing in Anchorage at 3h00 tomorrow morning, so we are 200km away from him and will meet Roger at 11h00 (to give him time to sleep,) and then we will set off with him, Jet-lagged to Tok, 500km away, but taking it slow to give him time to ease into this Bike Trip. As a result, we will be 2 groups riding, each one day apart.

With Roger new in the saddle and Jet-lagged, we will not be able to do a double-day to catch-up with them for a few days. But there are two short days in a few days from now which we can use to catch-up, but it is not ideal to split the group in two and I think they made the wrong decision to not leave tomorrow but rather decided to leave this evening, I think they should have waited for us and we could all have been one-day behind schedule together, but it is what it is, two groups, one day apart.