Last night we “Hit The Strip” ( I have heard in the words in many songs,) which maybe two city blocks of a famous street called Broadway (also hear in many songs) which has approximately 60 Bars, clubs and restaurants, all of which have live entertainment which plays one form or another of Country & Western Music. 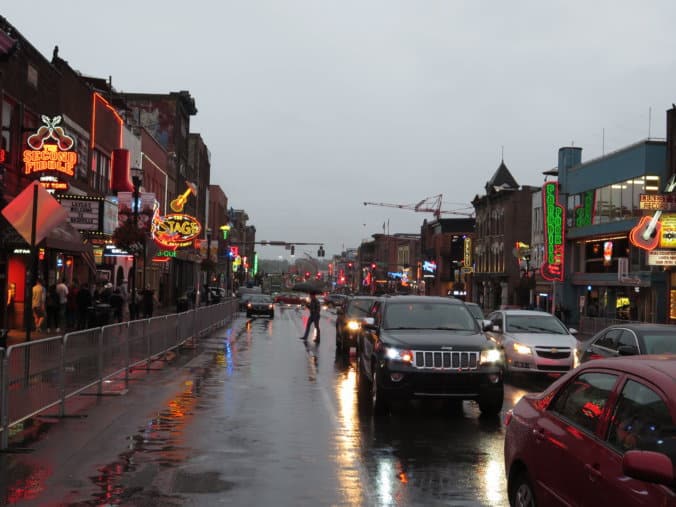 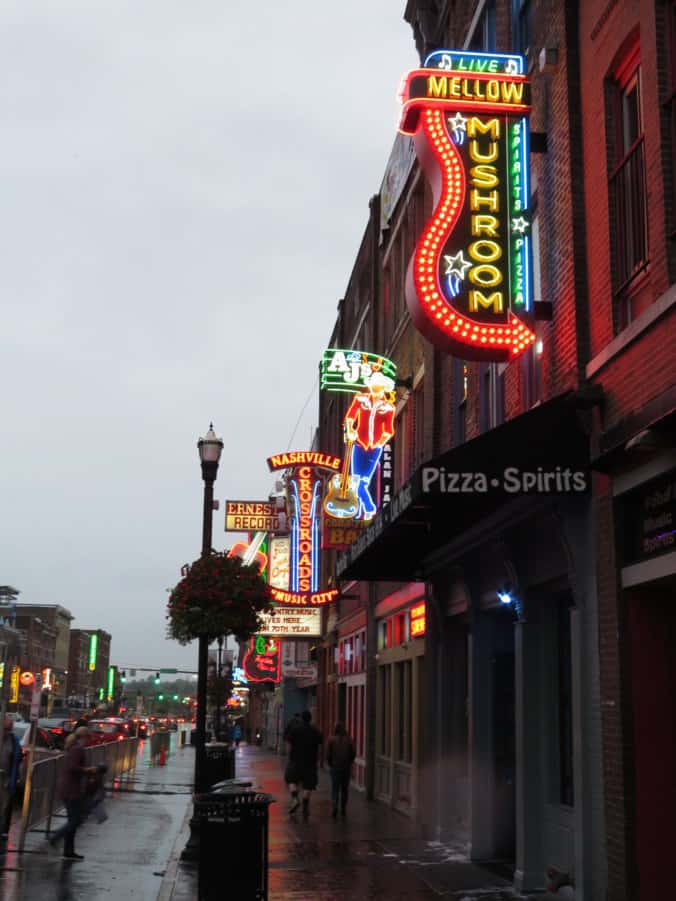 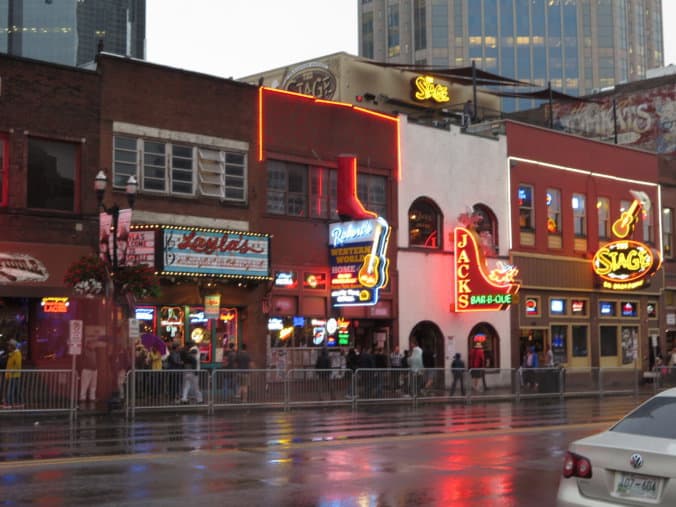 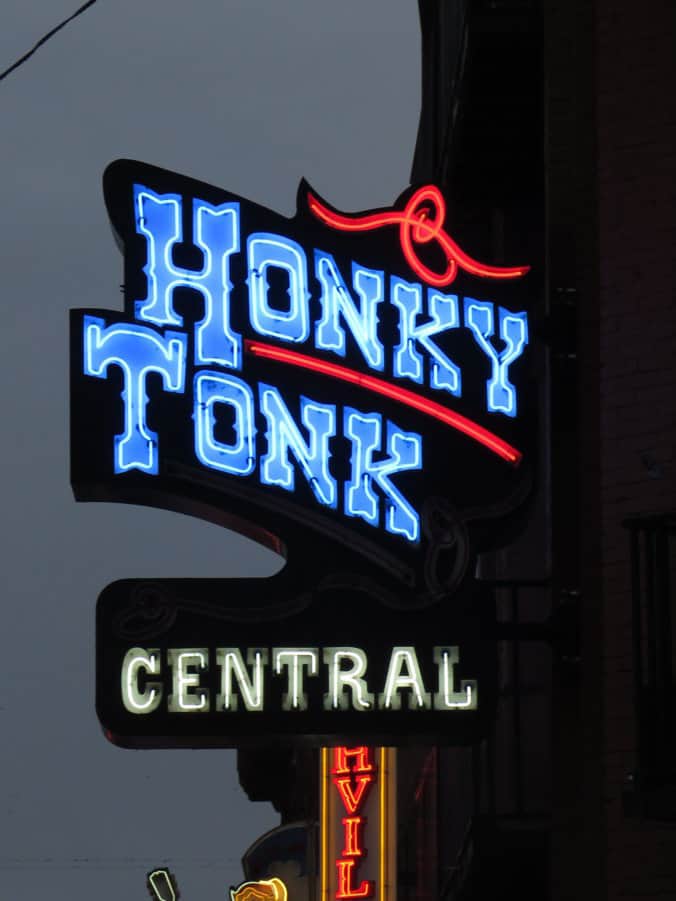 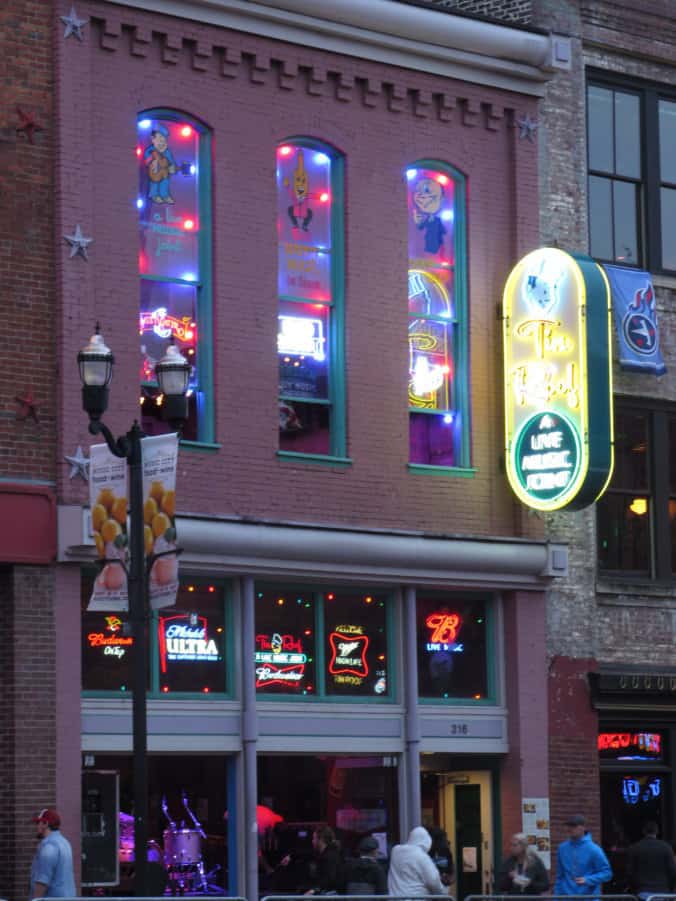 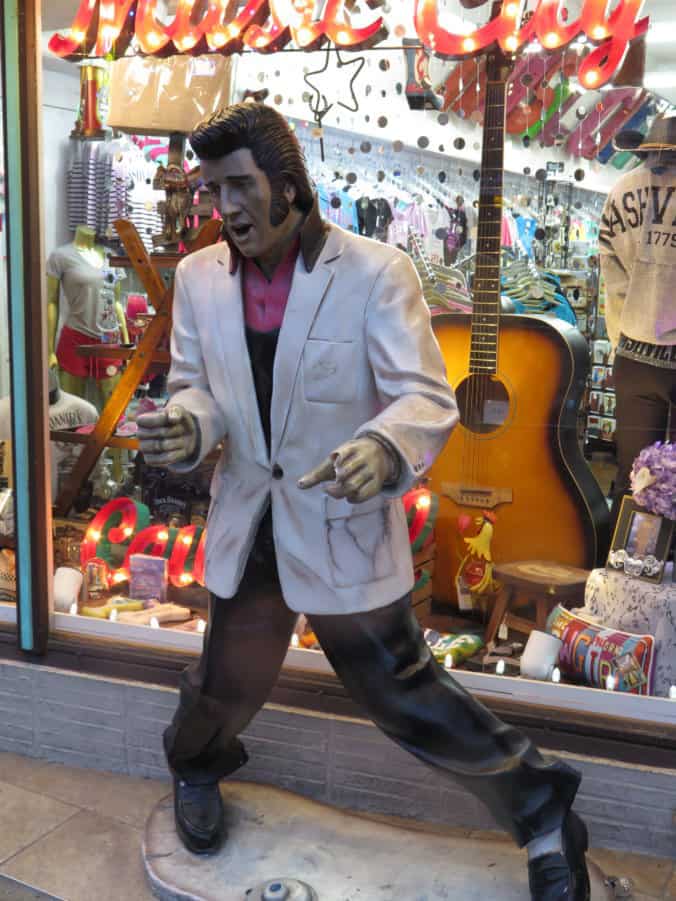 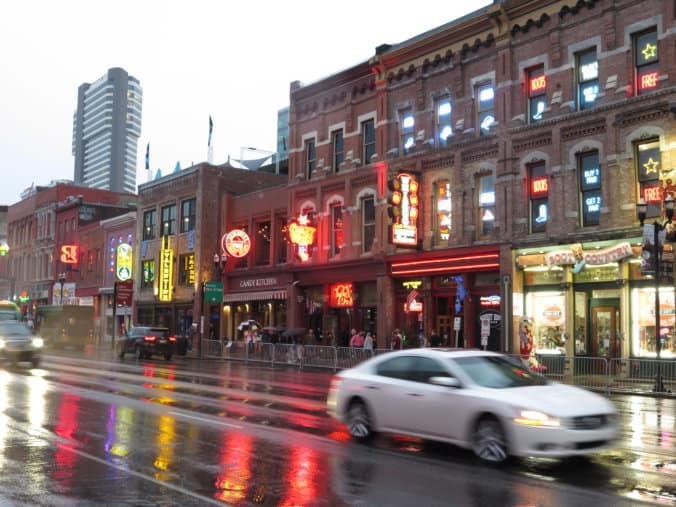 The only other shops in-between the bars, saloons and clubs are Souvenir shops with a Country and Western theme selling anything you can think of, from shot glasses with Dolly Parton on to Shirts displaying Elvis’s face.

But there are also several Boot-shops where the average price for a pair of boots is R7000-00 but they go up to 4 times that price for a special hand made, alligator or snake skin design. 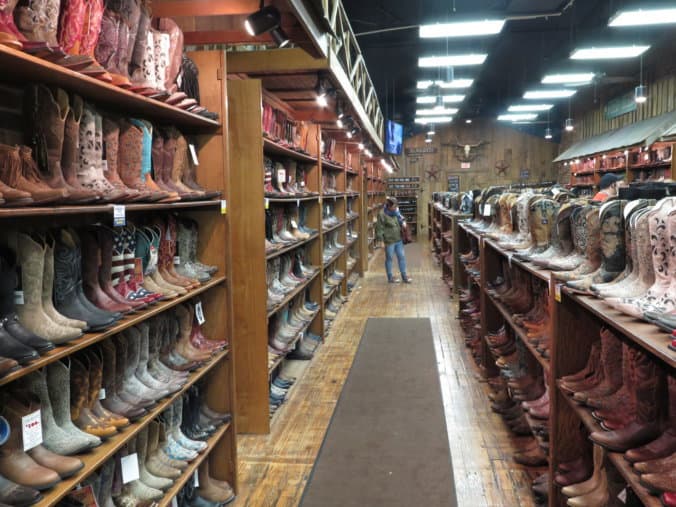 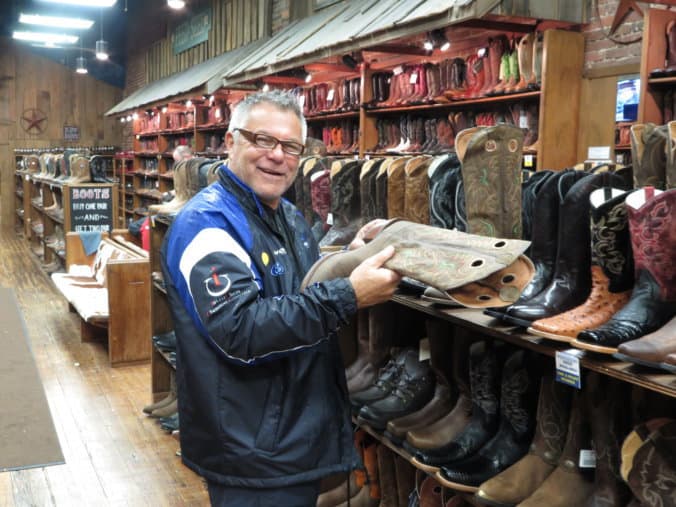 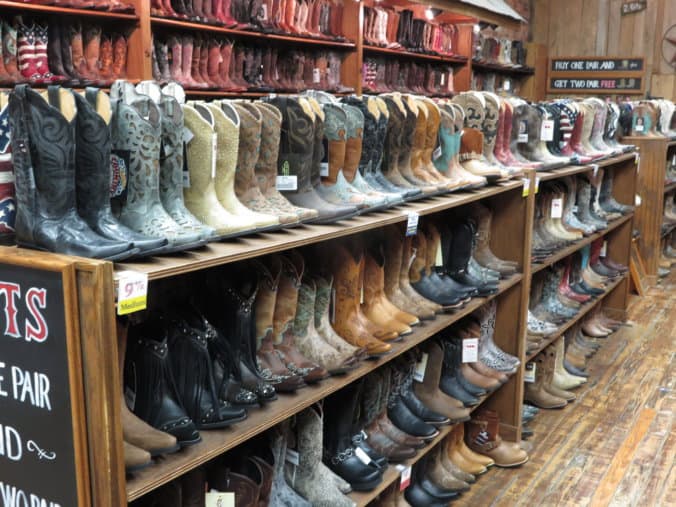 We decided to eat at a Saloon called “Wild Horse Saloon” which is a combination of a concert hall with stage, a huge bar, restaurant with further bars and tables situated on 2 Gallery’s which are on the 2nd and 3rd floor looking down onto the massive dance floor and stage. 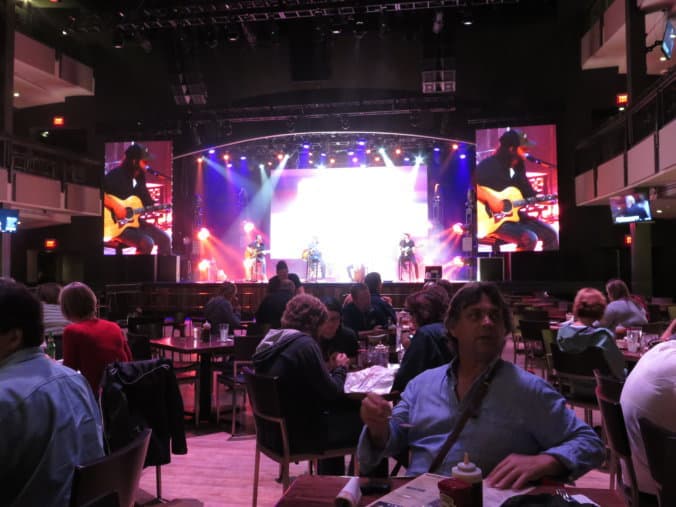 When the band goes off after playing their Set, the Line Dancing starts and new dances are taught by a lady in boots wearing a Cowboy hat and jeans and it sort of sounds like this ” Heel, Toe slap and step and turn and left and right and Heel, toe slap…….” 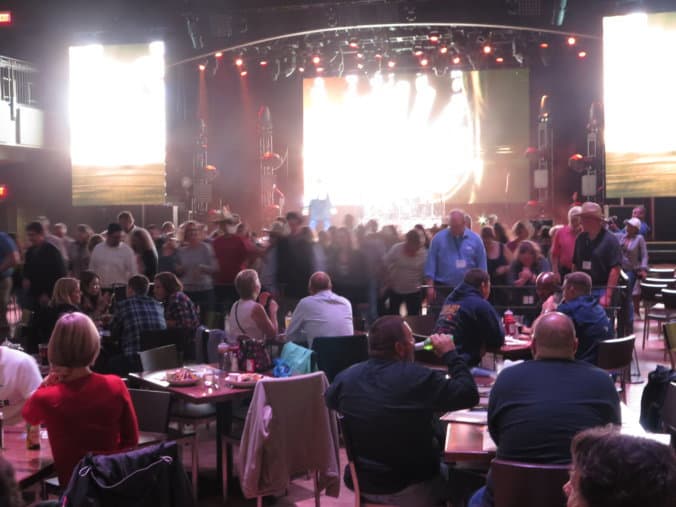 Hennie and Peens found a Wiseman at the bar and asked a few questions. 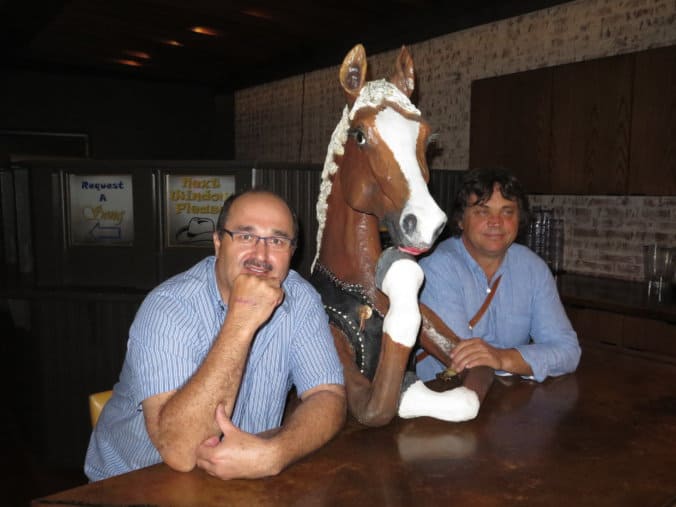 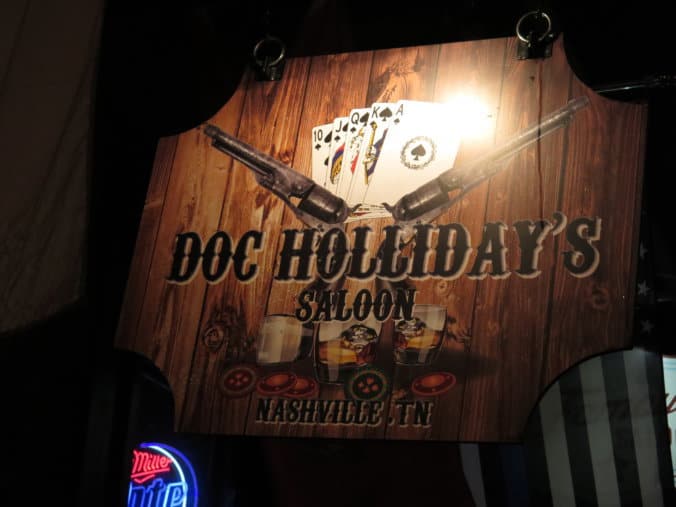 After dinner (I had Pulled smoke Pork and smoked Brisket with curly fries and Coleslaw,) we started having a “Loop Dop” at several different places, eventually settling at a place called “Roberts” where the band was proud to announce they play authentic Nashville Country & Western Music with a “Honky Tonk Sound.” But they were really good, they were so talented especially the guy on “Hawaiian Guitar” (it looks like an ironing board and there is a lot of “sliding over the neck” involved.

This morning after our breakfast served on plastic plates and our coffee in paper cups (yes, even in the expensive business hotels there is no crockery or cutlery in sight,) I was re-united with my Lap-Top. It is actually a very embarrassing story therefore I will have to tell you, while the entire Atlanta Airport went into shut-down to search for my computer it was discovered lying on a table at KTM (Sloan’s Motorcycles) where I must have put it when I was taking Kate’s little present from Africa out of my bag, it lay there the entire afternoon and not one of the customers in the shop stole it. Yesterday on the phone I was also informed by the Atlanta Airport’s Lost and Found that I would definitely get my computer back as no one would steal a computer left unattended. My biggest problem would have been choosing an address where it should be sent by courier so that I can get it back. Very honest and honorable people these Americans, I lift my hat to them.

But this does not mean I have not been searching today, in fact, we all have been searching, (no I dont mean searching for True Love for Peens, that is on going) we started thanks to Milsy who is not even here on the trip as he told Hennie his Spare Bike Keys were in his Jacket Pocket but Hennie only found the spare pannier keys, so once the word “spare keys was spoken we all wondered where our own spare keys were, and so we started looking, Rocky found his first (blood so well organized this guy) but I was so desperate to find mine I convinced him it was probably mine, and then they did fit my ignition and the key did turn, so then Rocky joined the rest of us searching for his keys again. Peens found his under his seat, which is better than the last time when he lost his keys and Romania and had to “Jimmy” his ignition lock, this time he would simply have to break open his seat. Then Hennie discovered a set of keys in his Milsy’s jacket pocket which did not fit Milsy’s bike, and by chance it fitted mine, so knowing Dad-Ass could not have two spares we decided to see if the bike starts and not just if it turns in the ignition, and then we discovered Rockies was the 1st set which I had claimed and that mine was in Misly’s pocket, so I presume Milsy was stupid enough to give me his keys, and that I why I have been looking in all my pannier bags, tank bag zipps and every pocket in my Riding Jacket and Pants, but still no Mily’s Spare Keys.

And then someone asked if we all had our bike’s papers with us, guess who is still searching as I type….  poor Peens, hope he can cross over the border into Canada with the photo copy Pie has for him.

Here are some photos of the road today. Peens making his Turtle-Look-Alike-Fashion Statement: 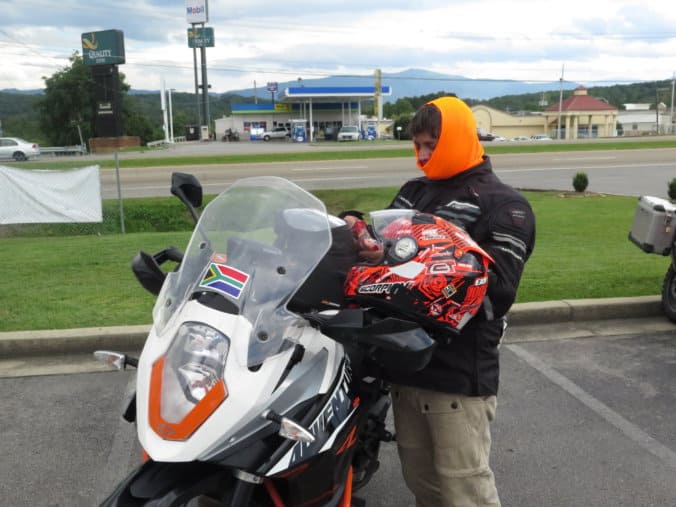 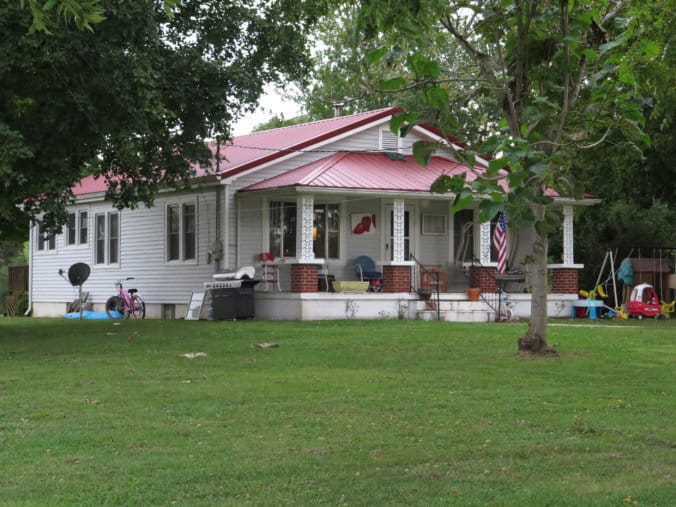 We spent the morning riding 400km in the rain, hot heading on the Route Tex and Dog had worked out for us but heading to some place where Pie wanted to see a Studebaker Collection, but by lunch we had a vote and decided he should continue on his Tour De Studebaker and that we will meet-up with him tomorrow night (at another Studebaker collectors area,) and gave Peens permission to choose the route for the afternoon which was a great decision as we spent the rest of the day riding on little Country Lanes and farm roads, which passes through small “villages” where some people have very interesting neighbors: 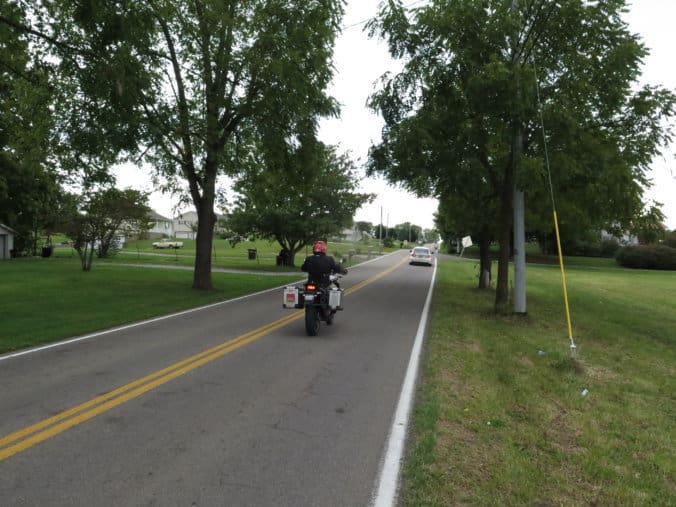 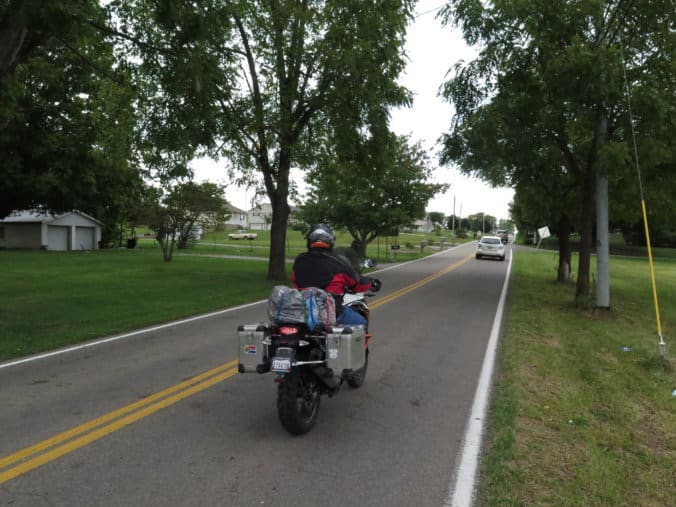 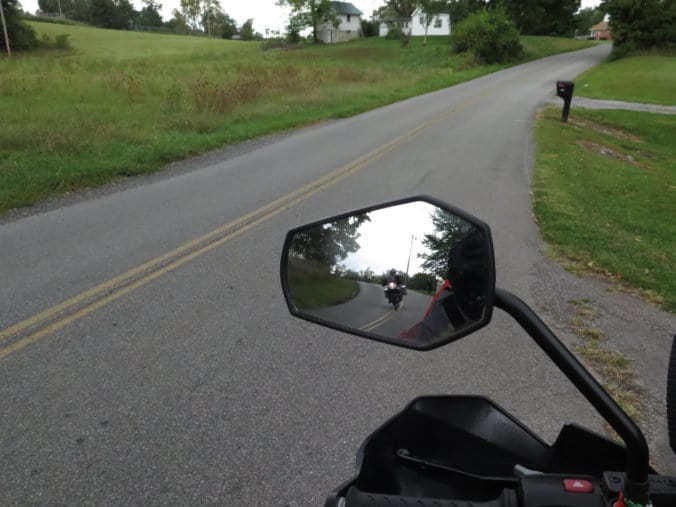 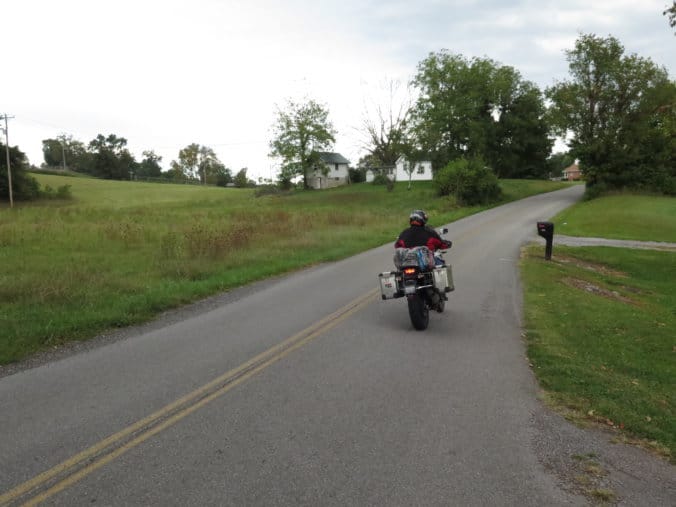 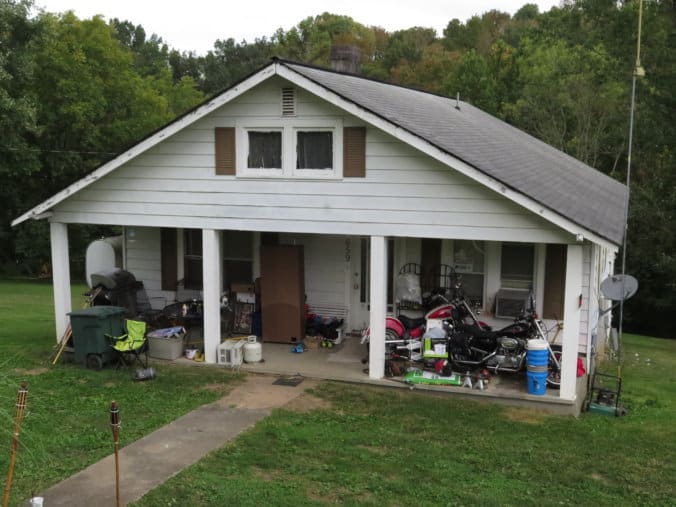 Then we crossed into North Carolina and rode next to Lakes, in Forest-Tunnels, winding through a Green Landscape. I could not believe the amount of boats at some of the Marina’s along the shore. 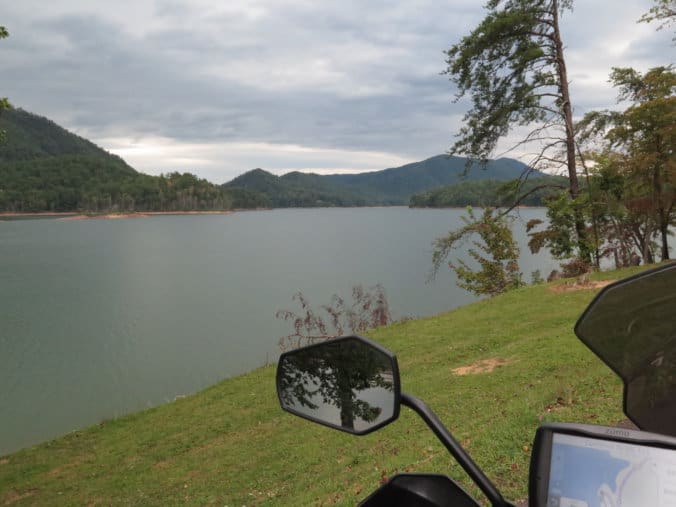 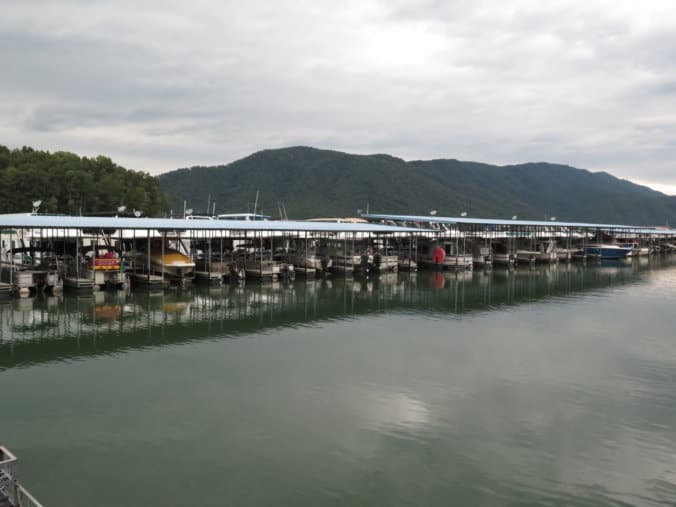 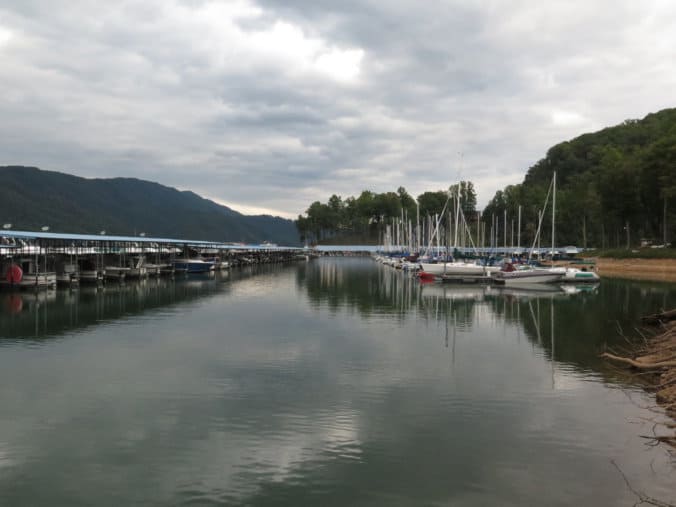 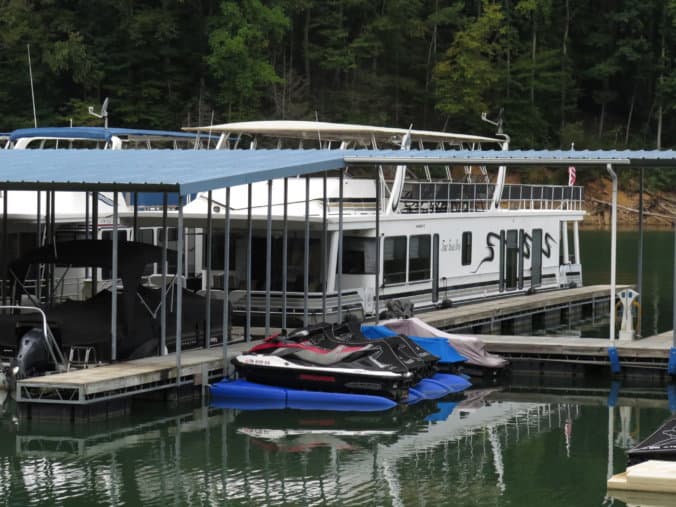 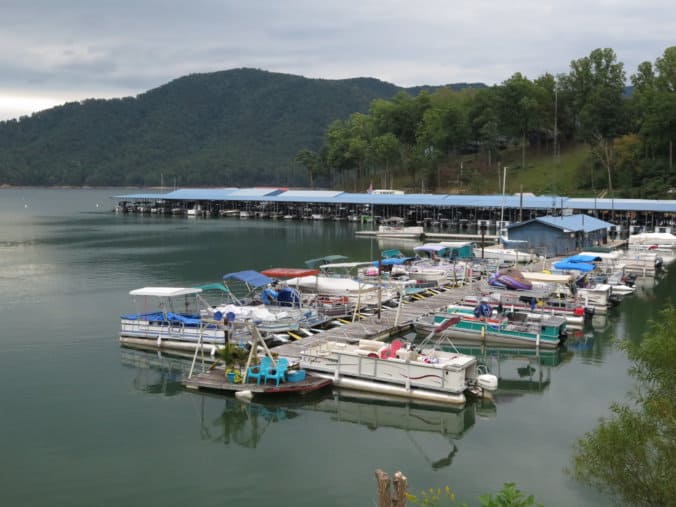 When we got to Boone we were proud at first to find this $15-00 per person Motel, but even me who loves the adventure of “Budget Accommodation” got scared when I looked into the room and got close to our would-be neighbors, so we decided to rather pay a little more and get rooms where the linen don’t speak to us. 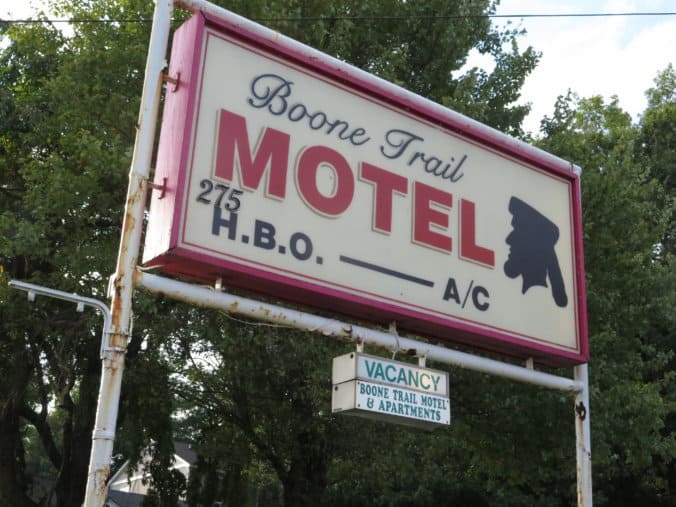 Hennie is starting to enjoy the riding in spite of the kitchen sink he is showing around Tennessee. 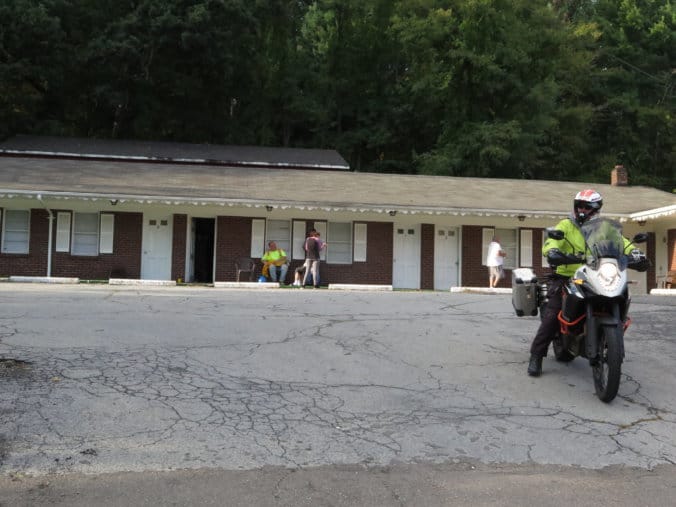 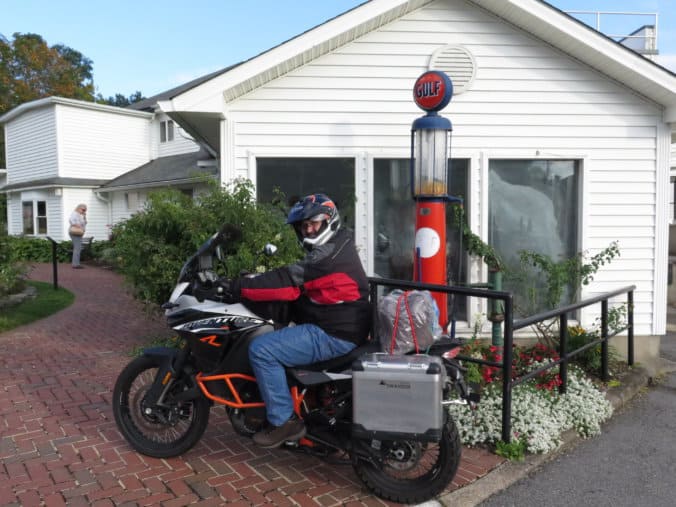 I cant wait to see what magic awaits us on the route Peens will lead us on tomorrow, today he played his GPS like a Maestro, finding the small interesting roads and leading us along other people’s garden paths. At one stage I was convinced he had lost the plot as I could see no roads ahead on my GPS, but once we went through the school, past the bus, parking, past the Football Field where they were practicing American Football, we ended-up on some little path and Peens managed to get us to Boone using the short-cut.