Peens did have his camera onto super-fast Shutter speed as he did manage to get this photo of me on the Dragons Tail yesterday. (There were professional photographers as well, sitting on some corners on camping chairs under an umbrella and one can buy these photos on-Line.) 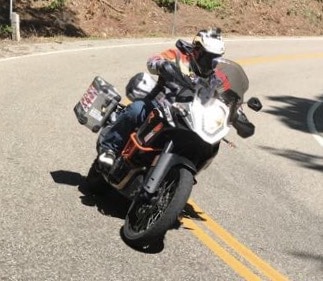 Last night we were having our Oros in the parking area in front of our rooms at the Motel when Pie arrived, he realized it was the right thing to do to ride with his KTM Friends for the last day of riding, (I think the Studebaker Guys chased him away, he is still wet behind his ears they would have said.) We had a look at the Harley-Free-Way-Footrests Dog had fitted to the 990KTM, it is like fitting a Bull-Bar to the front of your Sports Car I think, but hey, these Harley riders dont like change, 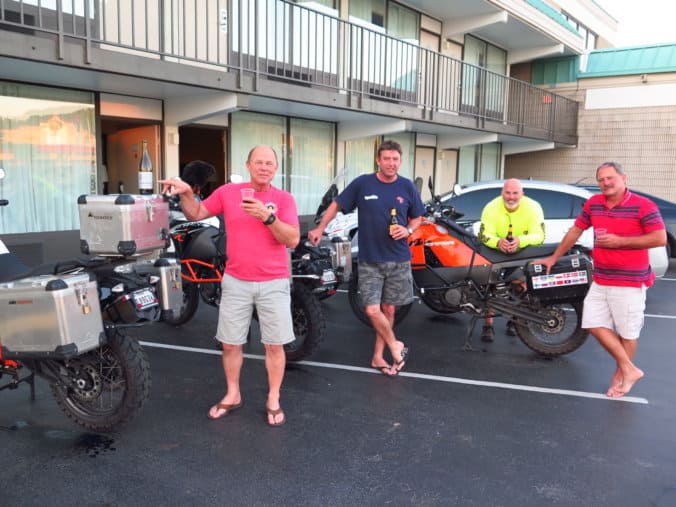 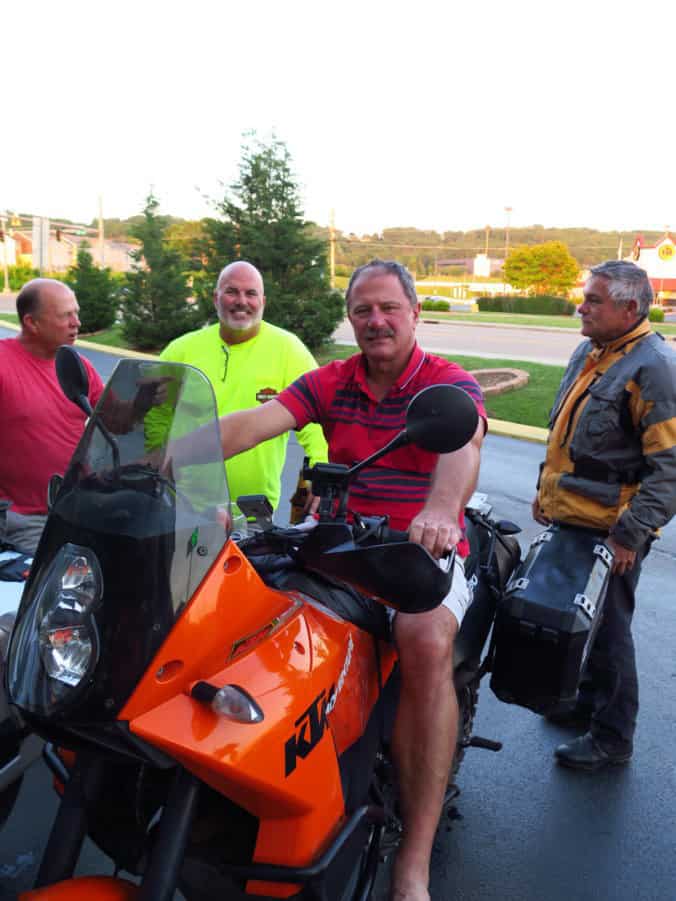 We went out to the local Sports Bar and there we met a group of people, the group was very nice, apart from one guy, (the big guy in the photo below) who was a proper Hill-Billy, and he kept on saying loud enough for us to hear, “My damn Honda will kick any KTM”s Ass, it will, I tell “Yoll” (You All) but then Pie started speaking loud enough that his KTM will never lose to a Honda, and so the bantering went back and forth, but eventually we became friends and this big guy is going to organize us when we come back in September to take us (with his Honda) on I think he said the Rubicon Trail, but he was a la few drinks ahead of us and I could not understand his accent, he might have said he will lead us on the Trail on his Honda “Rubicon” do they make such a bike? 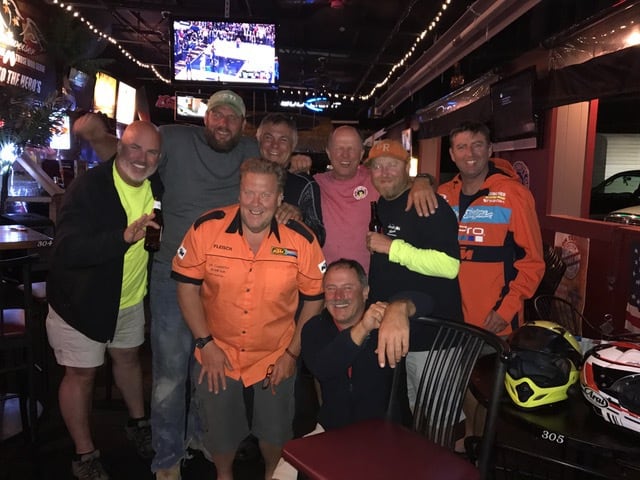 He is welcome to bring his Honda and follow us with all his luggage and ride 7000km Like we did this trip.

This morning we left and for the 1st time in a long time we were 7 riders again.

We were not in a hurry and when we stopped for a toilet break Pie decided it was time to buy a large ice-cream and we had to wait in the hot sun while he eats his tub. But he was willing to share. 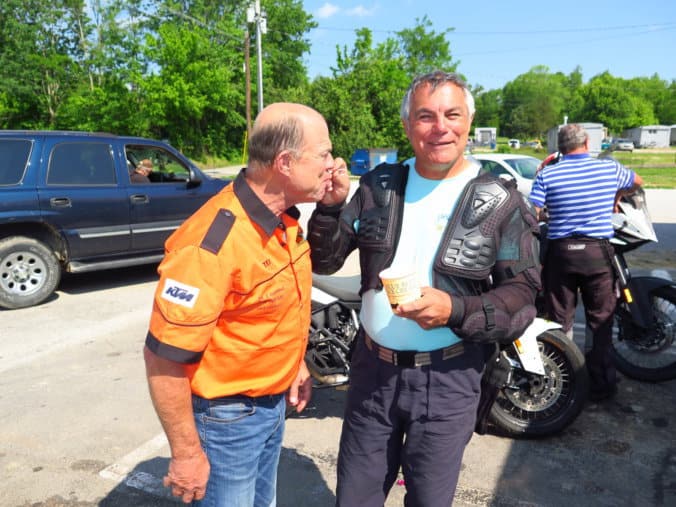 We rode to Lynchville, State of Tennessee (which we entered yesterday) to the Jack Daniels Whisky Distillery. We took the 1,5 Hour tour and I thought it was going to be too long, but it was so interesting, and I must say, our tour guide was fantastic, she had such a good sense of humor and had us laughing all the time, and the information just flowed, and she made it so interesting we hung onto her lips.

Here she is standing next to a Life Size Statue of Mr. Jack: 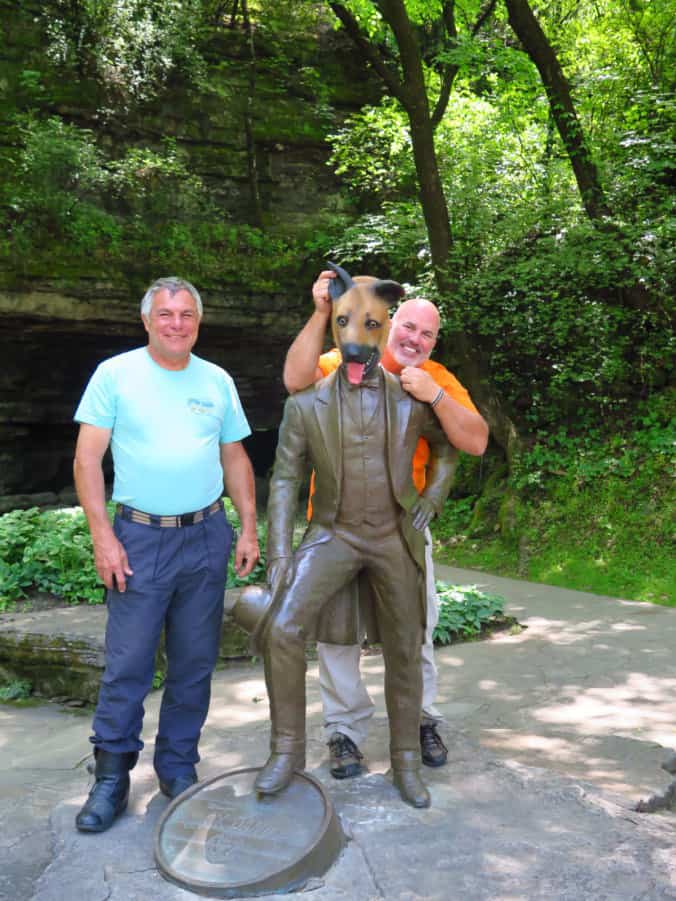 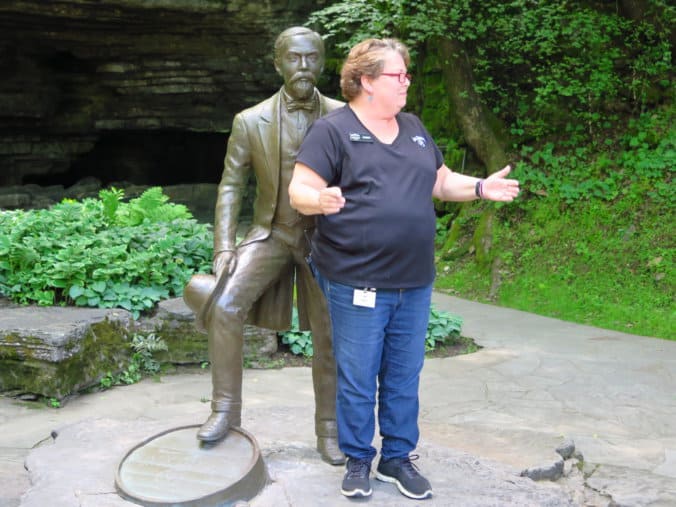 He was very short and was never married, she said people always asked why he named the Whisky Nr. 7, she said it might be because he was taught to distill at the age of 7 by the Lutheran Priest, who made Spirits during the week and then spoke of another Spirit on Sunday, so eventually the congregation complained and he sold everything to Mr Jack for $25-00. But she said it could also be because he was in Rail Car Number 7 when he went to the Sate Fair where he won 1st Prize for his Whisky, but the lady said she believed it was because he was never married and had 8 girlfriends throughout his life, and she thinks number 7 was his favorite.

Here are some photos of the tour : 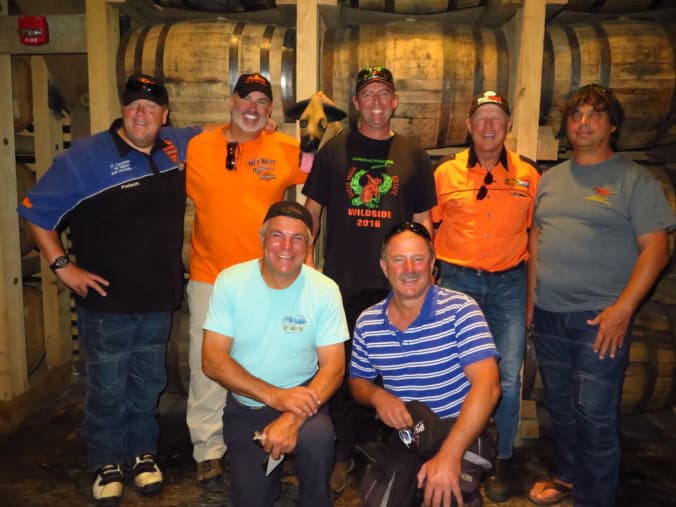 The Barrels are stored 7 Storeys high. The quality of the whisky differs depending on how high the barrel was with-in this 7 floors as the temperature differs at different heights, so the wood of the barrel contracts more whenthe temperature differes more, and then you can throw in a hot summer’s day or a cold winters night and all this opening and closing of the pours in the wood on the inside of the barrel absorbs whisky and then pushes it out again, causing more interaction between the burnt wood insides of the barrel and the whisky. It says in these barrels for 5 years. 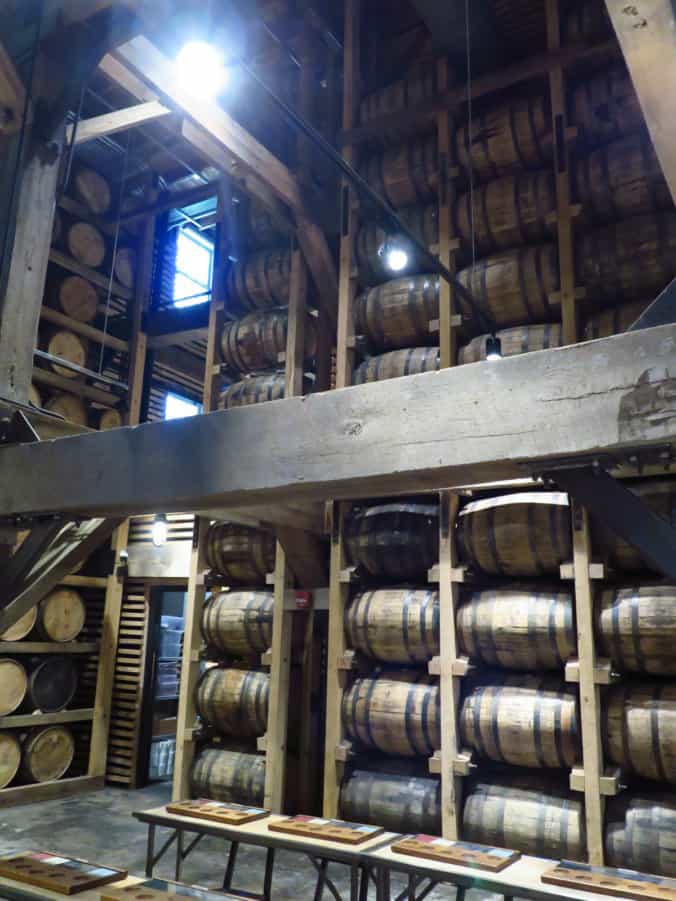 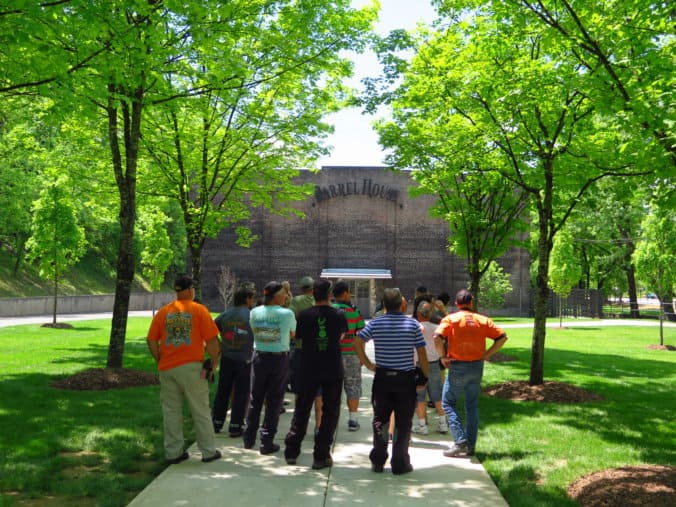 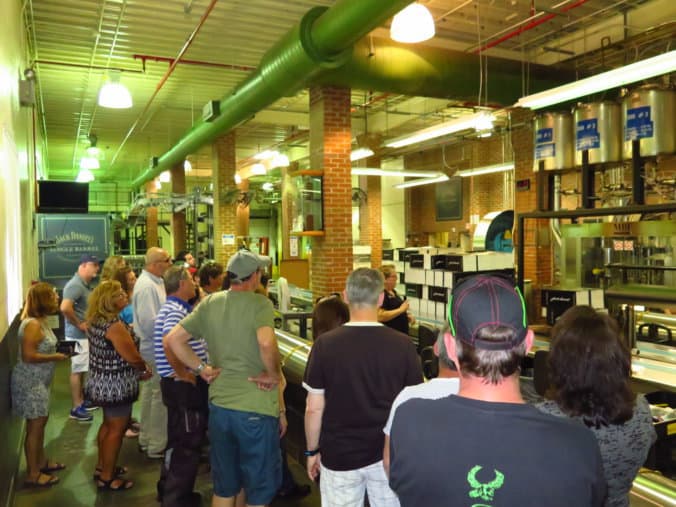 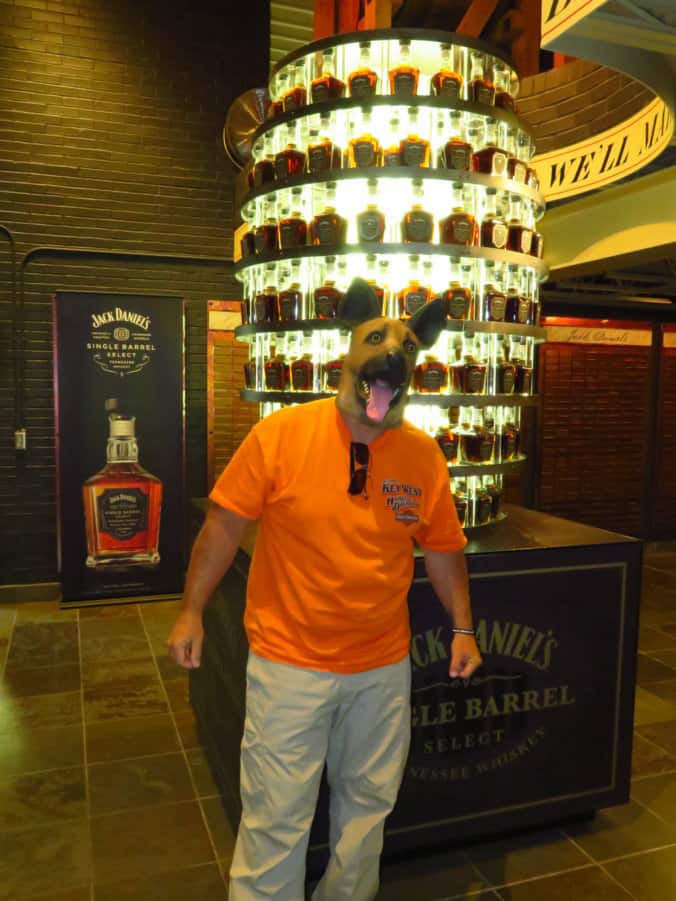 They use the natural spring to cool the Fermenting tanks and there are little streams flowwing all over the Yard. 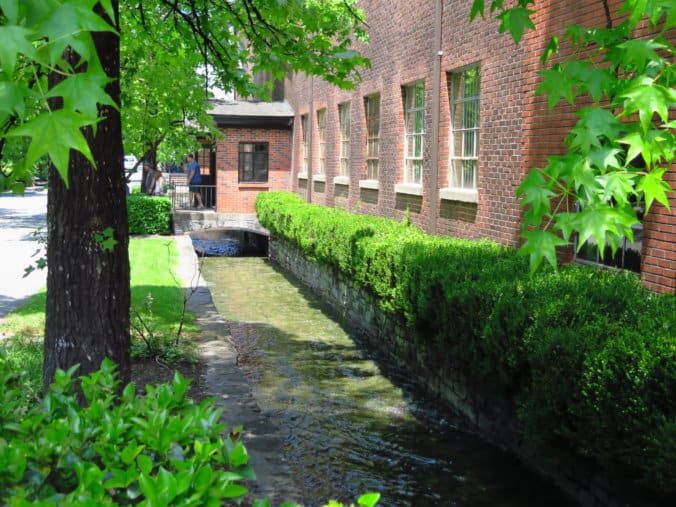 Under this Rock Overhang is where Mr. Jack started, right next to the spring. This is special water which adds to the taste of the whisky. 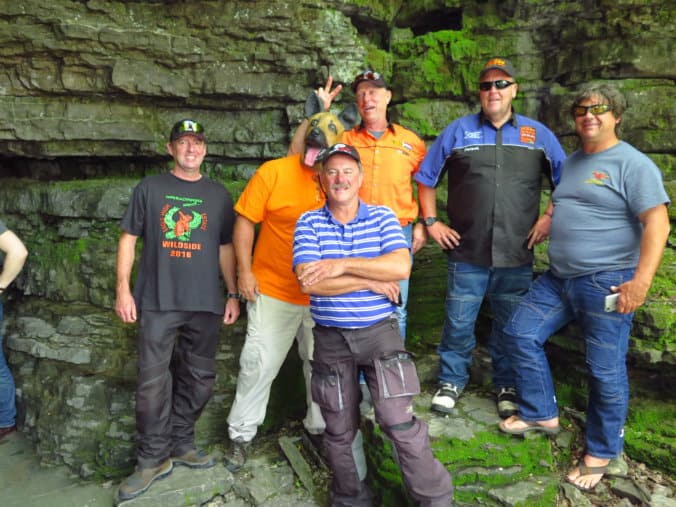 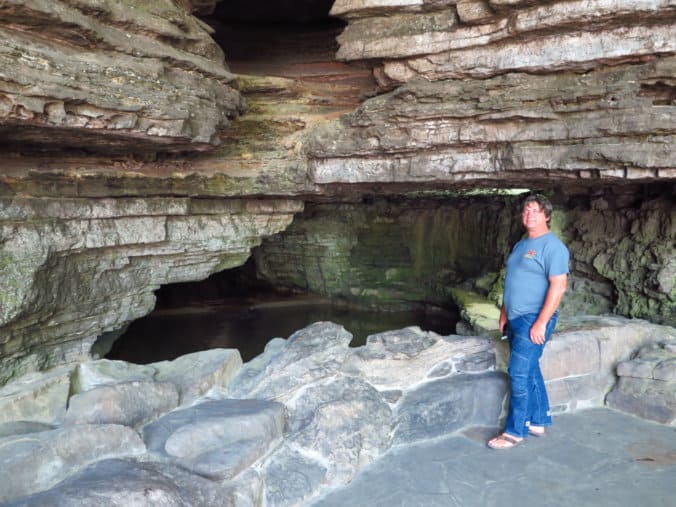 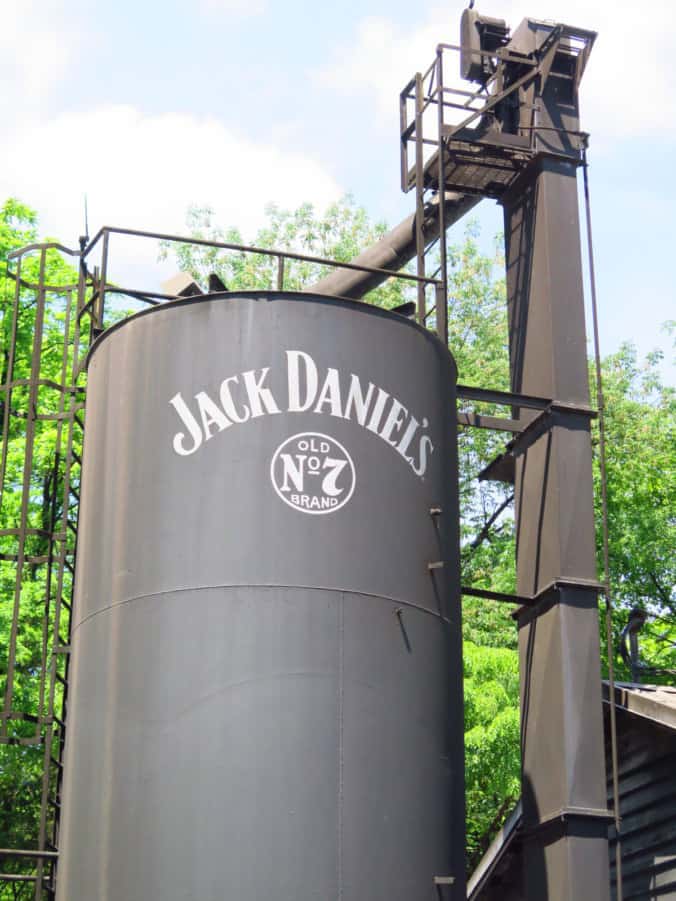 We had a whisky tasting and sampled 5 of their top whisky’s, non of which we get in RSA, it was interesting how their alcohol percentages differed, one was 80% Proof, another 90%, one of 94% and then another that was 134% Proof.

But what I found most interesting was that they make their own Charcoal for the filtering process using Maple Wood which they burn and then cool down just at the right time. The charcoal is then placed in big tanks and the distilled whisky is sprayed over it and it takes each drop one week to run through this filter, giving it some taste and removing the impurities from the clear liquid, (the colour is as a result from the time in the wood barrels.) 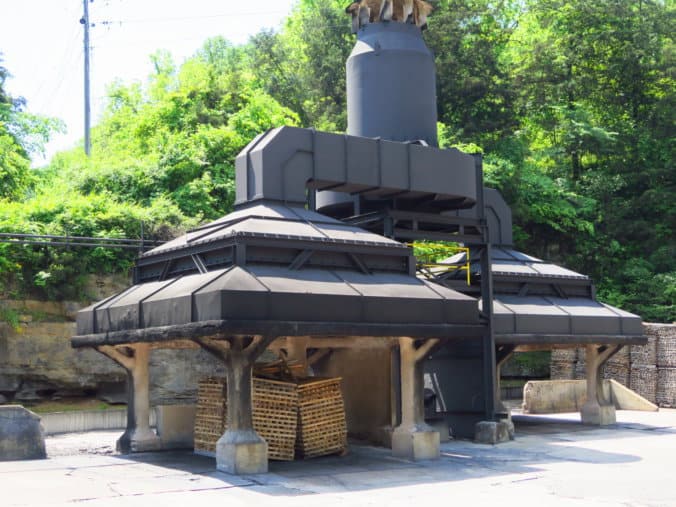 After the tour I met this older Gentleman, he rode to a few places, I think he said he is from Austin and rode to a few places and is now  here and tomorrow he is going to ride to Georgia. So there is hope for me to also one day when I am old continue riding. Note the Notes on his Tank Bag, here is another guy who Navigates using Route Markers. 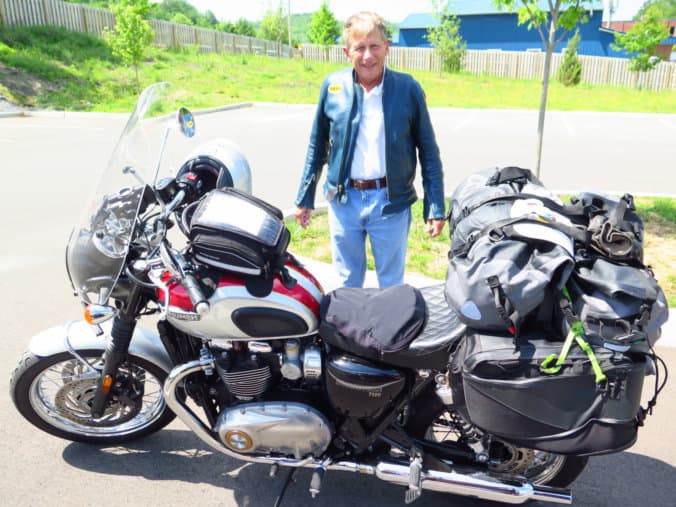 I also stumbled onto this Hoarder, (a person who hordes,) he\she probably started by just buying one little ornament for the garden and then could not stop. 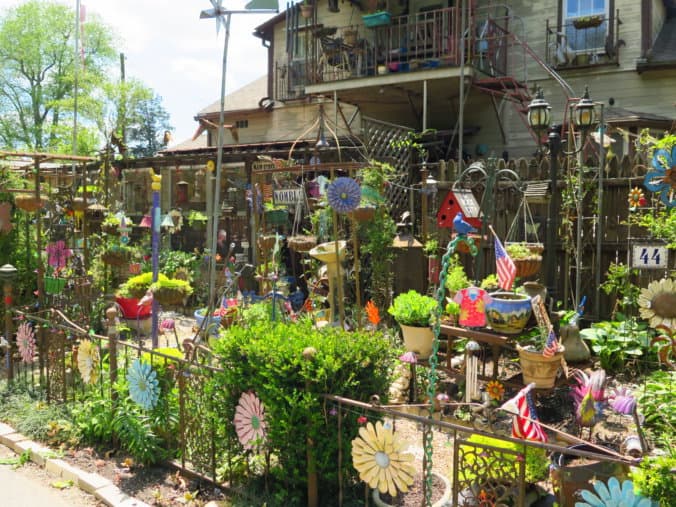 Then we rode to a town called Murfreesboro where we went to the Engineering and Tool Making Factory of a friend of Pie and Tex who they met when they were studding at the Technical Collage. He is another South African who emigrated years ago and we as a country is poorer as he has a successful business here and employs 11 staff. 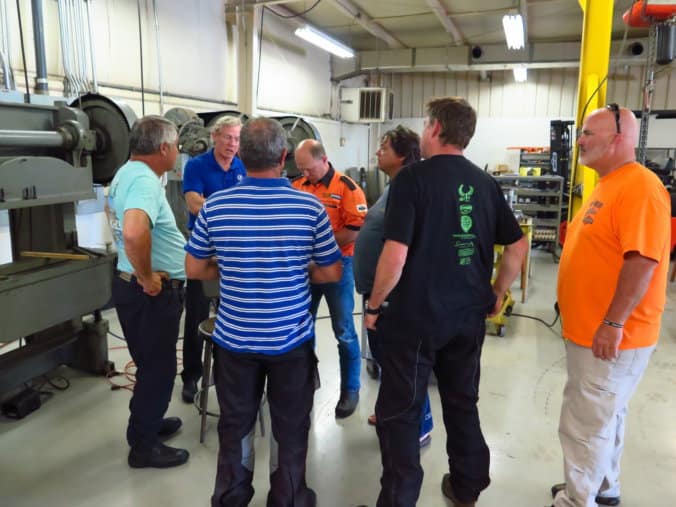 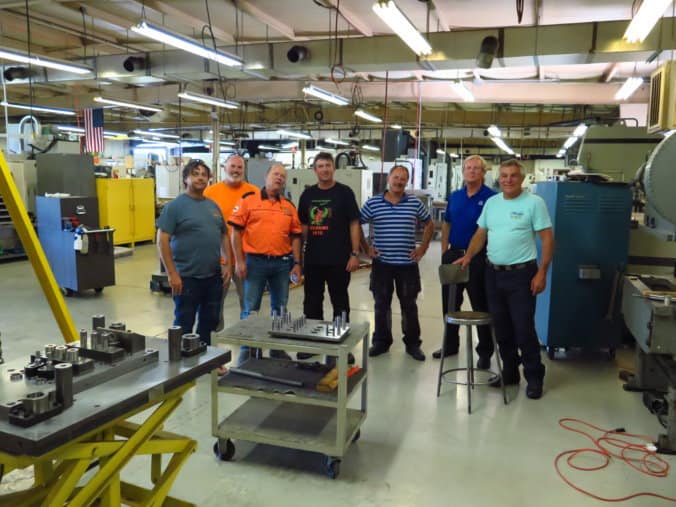 We have been invited to join him  and his wife for dinner tonight. More about that tomorrow.

Then we rode to find storage and the  KTM Dealer as the bikes all need a service.  Tomorrow we re-pack and put everything inside the storage unit we have rented.  Tex and Dog flies home at lunchtime and the rest of us fly to Atlanta and then home later the afternoon. I will do one last posting tomorrow, but it will be short and probably boring, unless something happens tonight, which it can, with people like Peens and Pie around. Tex heard today from Amey that a very very very large fine arrived at her house in New Orleans from the night Pie drove Rocky to the restaurant in the Sports Car, in his defense, it was a speed limit of only 25 miles per hour and that car does more than that speed just when it idles.

Day 206 Wednesday 10th of May Murfreesburo to Nashville 38km