It was a 7 hour and 1 minute day in the saddle today, although we did 524km for the day, our average moving speed for the day was only 75km per hours, and that means we had a lot of traffic, in riding gear, in 34 degree heat, not easy, specially when Peens sends me photos from Cuba  “of his new bike” (will get the full story when he re-joins the group on Friday.) 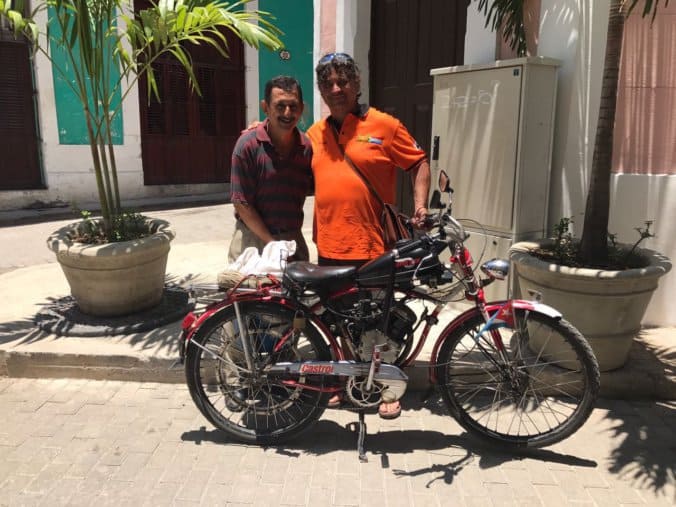 We are a little lost at the moment as we all of a sudden find ourselves with extra un-planned days to fill thanks to our situation with the Pirates of the Caribbean Boat, the Black Pearl. So Dog left us today to ride to Atlanta to go and visit his father who is very ill. We dropped Amy off at the Miami Airport this afternoon and she is flying back to New Orleans and Pie also left us and rode ahead of us to the town of Stuart to go and see a car he heard was for sale. And to no surprise to anyone who knows Pie, he bought this 1929 Studebaker today and it will be shipped to RSA shortly, (but he tells me he was first interrogated by the seller and all his friends to see if Pie was “worthy” of owning this car, so he obviously passed the test. 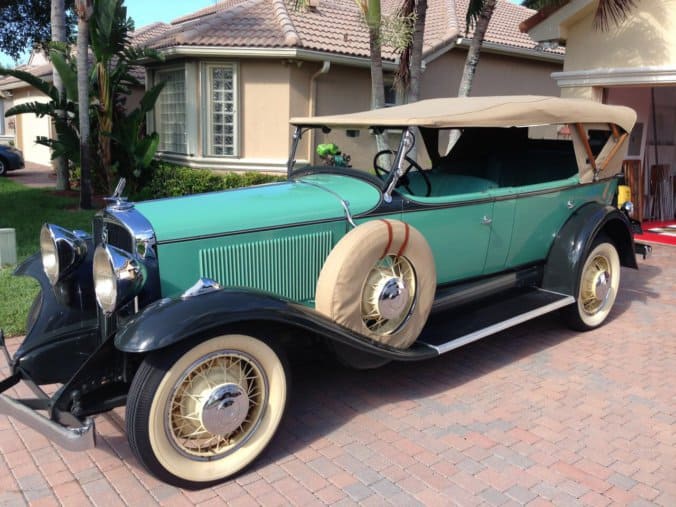 The rest of of (Tex, Milsy, Rocky,  Amy and I went back into the Everglades to ride an air-boat and do an echo tour inside the Everglades National Park. 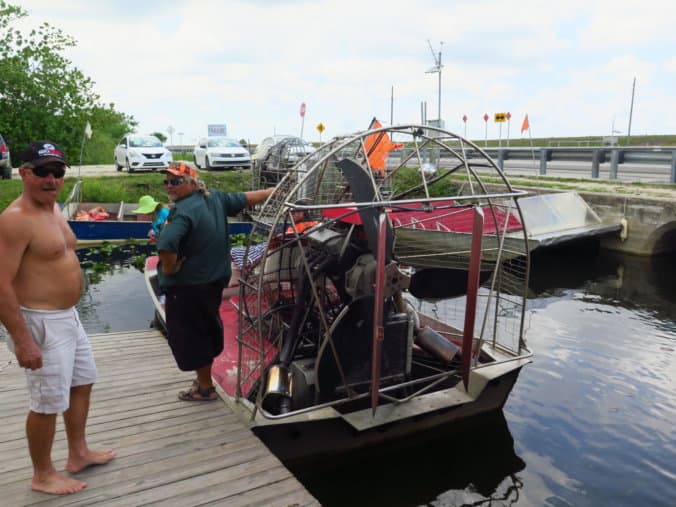 Here Rocky is standing at the back of the air-boat, (propelled by a V-8 Ford Motor which spins a propeller. 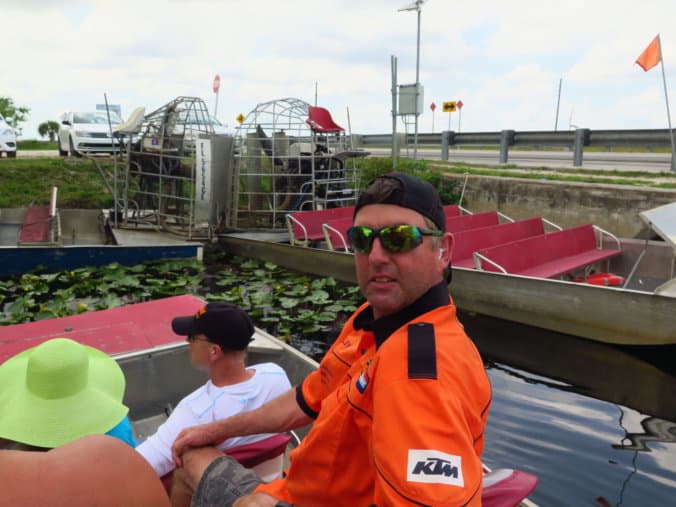 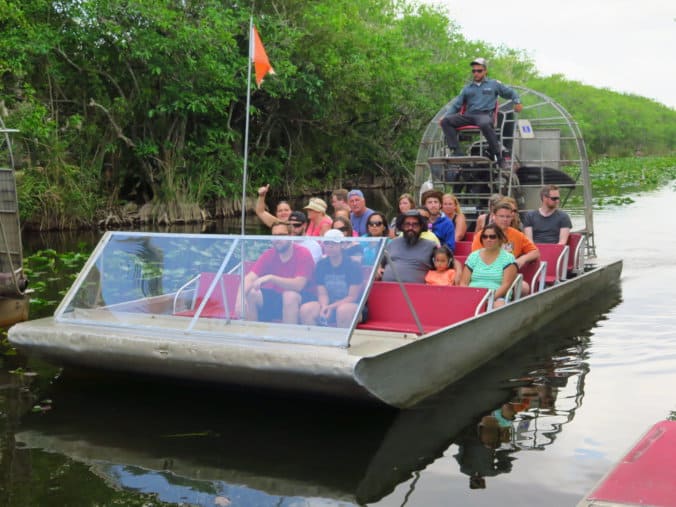 They have bigger boats as well but we had a small one with only us 5 on board. 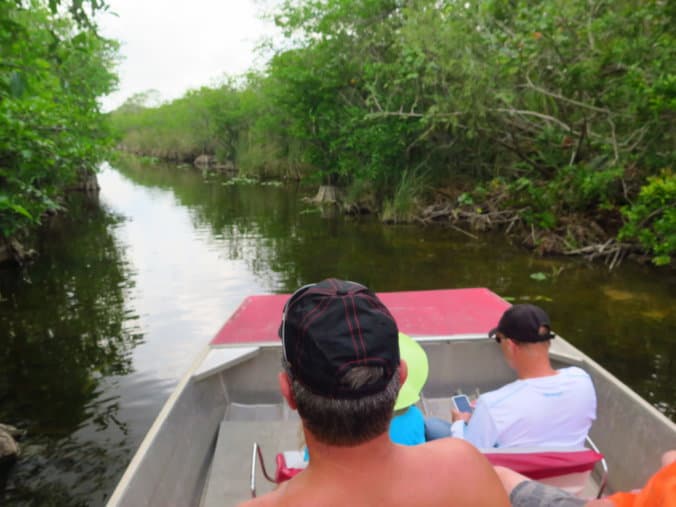 In the beginning the waterways were wide and the depth of the water was about 1 meter deep, but it soon narrowed to the width of a foot-path of water about knee deep and grass on the sides which grows inside the water. 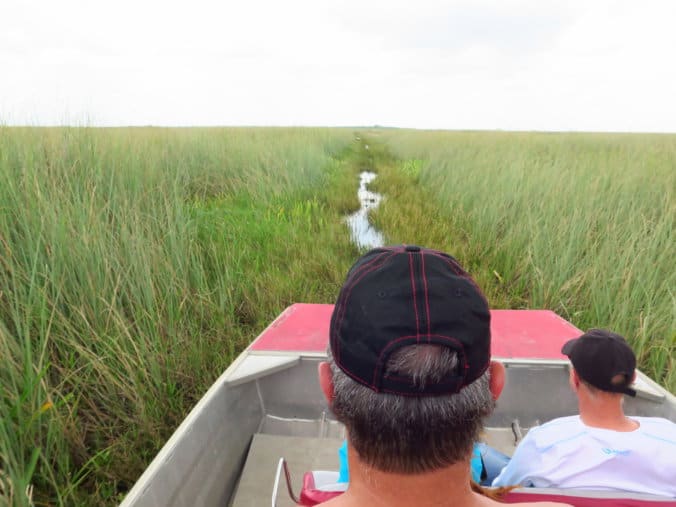 Our Pilot\Guide stopped every few 100 meters to show us either the hundreds of water-birds and naming them, (I did not take notes but can remember that apart from “Pinky”s, there were Wood Storks) these birds were attracted to the wetlands and swamps for the abundance of insects they feed on.

We also saw two different types of Turtle and 4 fish species swimming in the clear water under the boat. There are also deer, black-bear, armadillos and Jaguars (black Leopard,) on the areas that are not submerged.

We must have seen 70 Alligators in this 1 hour we were on the water. Our guide told us so many interesting facts about them, he knew these facts 1st Hand because he used to be an Alligator Wrestler before he became an air-boat pilot, eg. the distance from it nose to its eyes in inches calculates to the length of the Alligator, so if it is 6 inches from its eyes to its nostrils, the alligator is 6 feet long. In Florida there are 1,9 Million Alligators, but in Louisiana they have 3,8 Million, Alabama dont count theirs so no numbers are available. 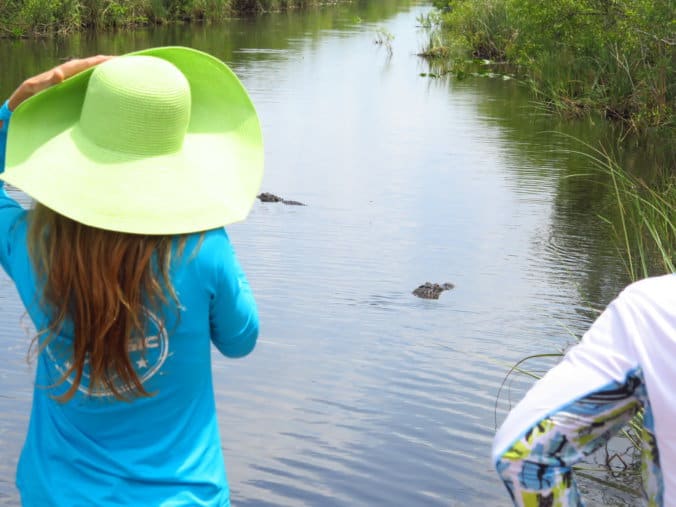 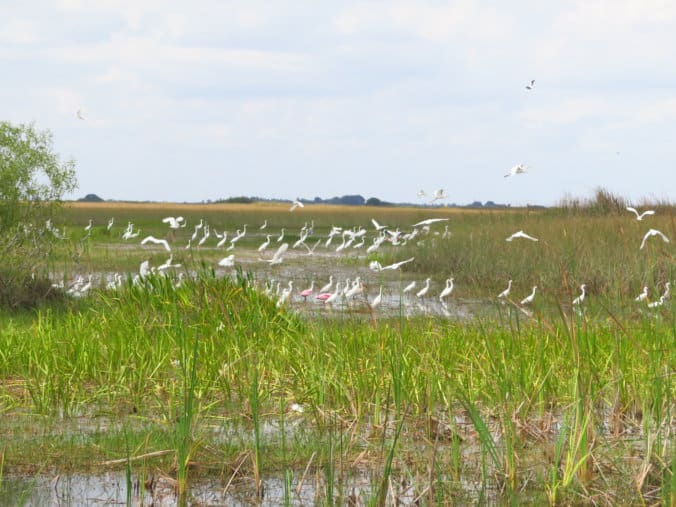 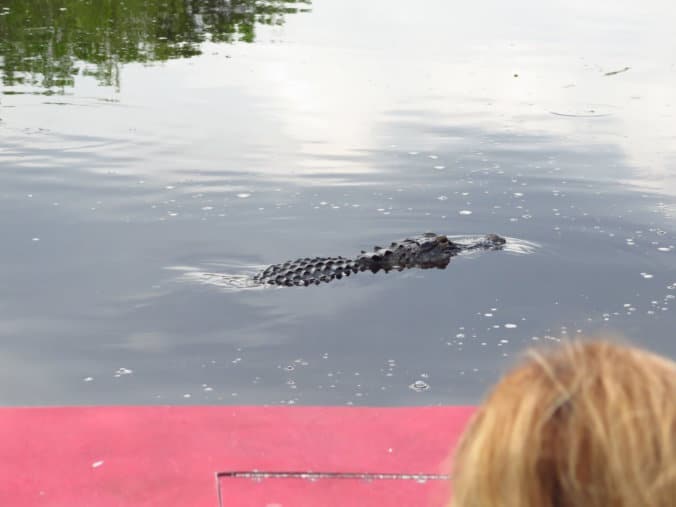 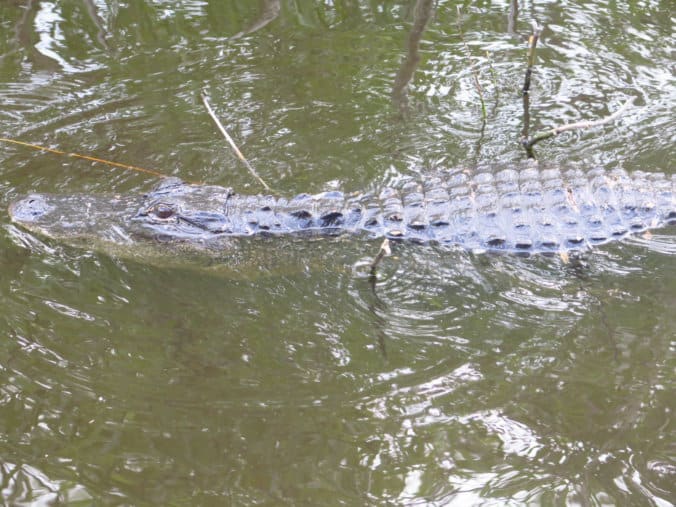 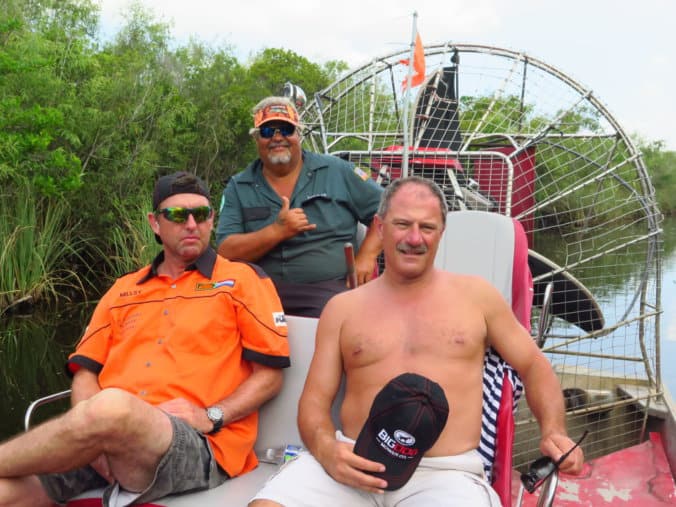 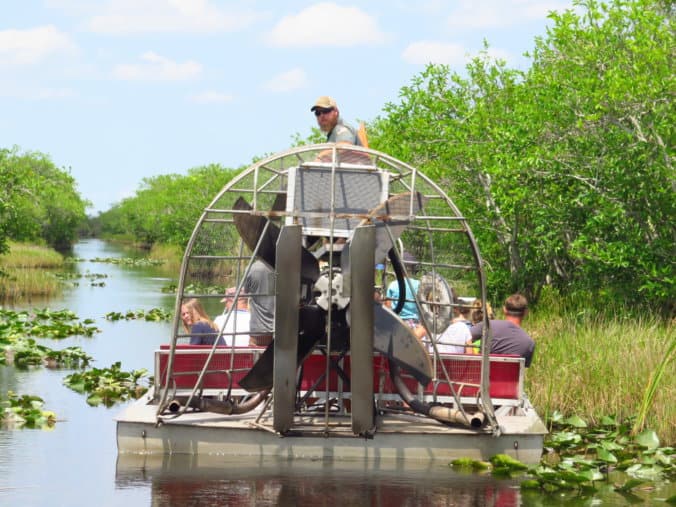 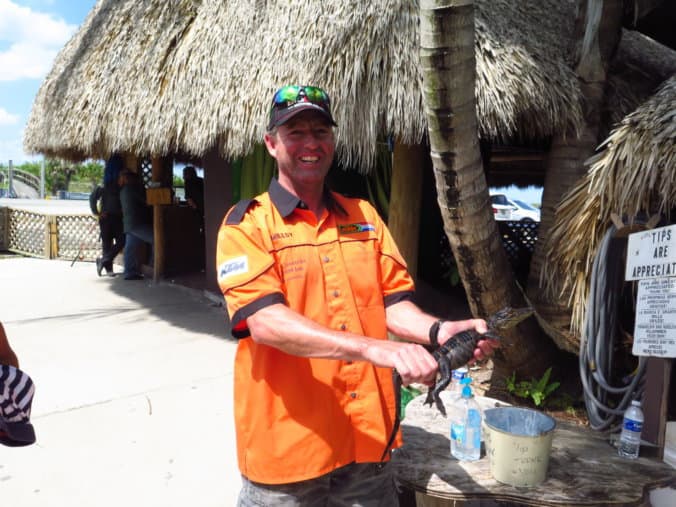 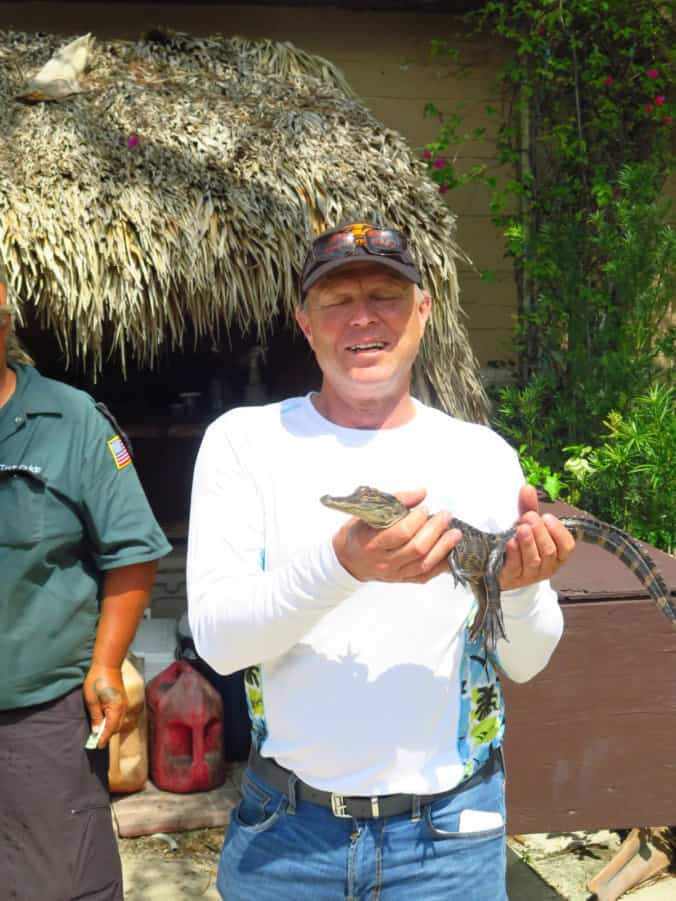 He also told us that this Alligator below, Grace, who always lies on this spot is 25 years old, they grow very fast for the 1st 5 years of their life, but there after only grows one inch per year. 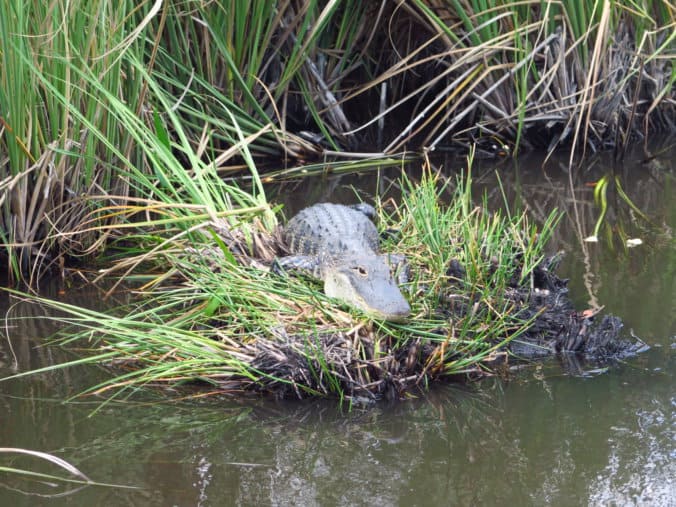