This morning we entertained Sergey’s kids and tested the parking attendants photography skills, he needed glasses as after several attempts of taking our photo I gave-up asking him to take another. 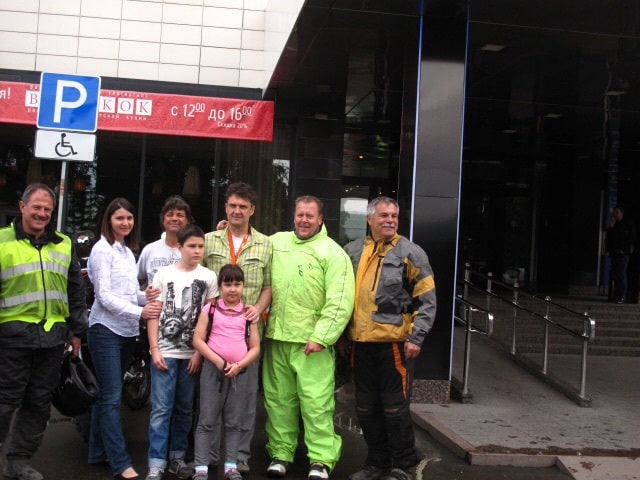 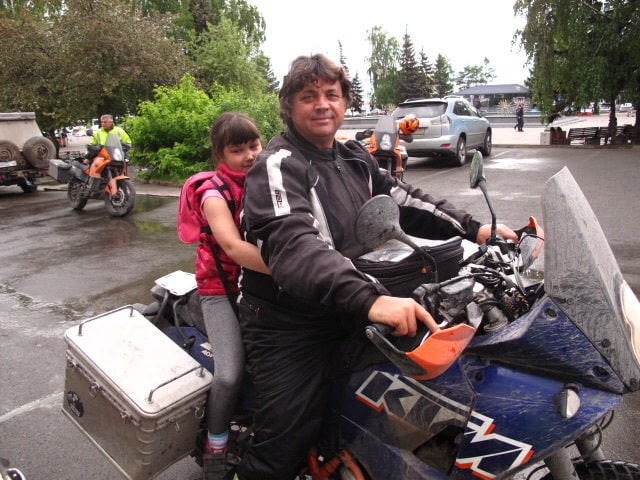 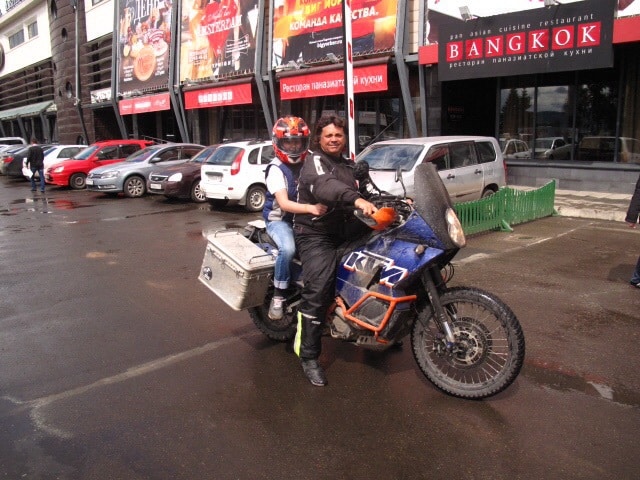 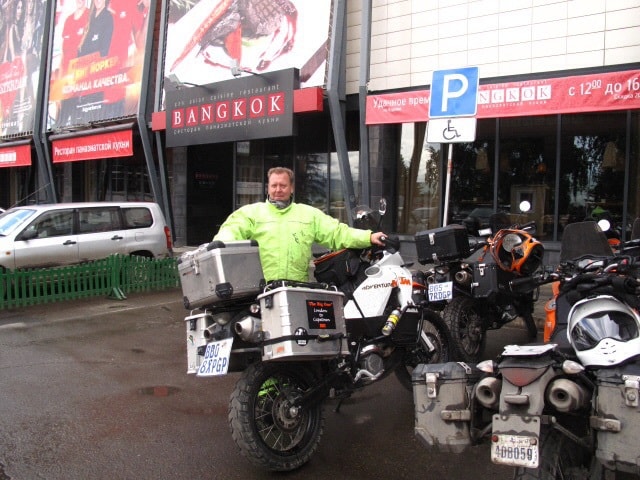 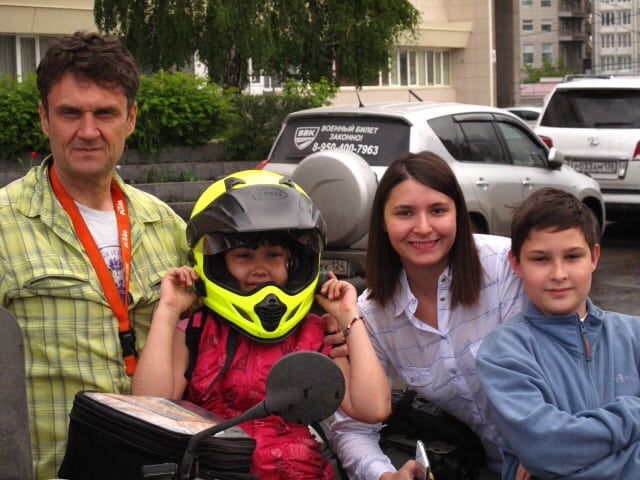 This morning Pie raced off with Sergey hanging on the back pf Tex’s bike to collect the “spacer-disc” Pie ordered for his clutch. Sergey phoned a friend who knew a farmer who owned a horse which was ridden by the daughter of a woman who was married to a man who built his own airoplane, so he was sent a text with the size of a disc to be cut to be “popped” into Pie’s clutch to fill the gap of the parts he burtn-off when pulling the Toyota out of the mud. They collected the disc and given to the free of charge, just helping was enough.

When they returned they “popped” the disc into the clutch and we left, but in the traffic we passed a KTM van and beteen traffic lights Peens told them our sad story and they suggested we follow them to their workshoP.

It was a small double-story building with a small workshop and small shop up-stairs. There were only two staff members, Ivan and Kostya. I did not think we would get any help and decided to buy a new cap to hide the bad-hair-day (14 days actually) I was having to at least spend some money with them as payment for being so friendly and being able to speak some English.

But then Peens bought a replacement front mud-guard ( this was needed badly as the last time he dropped his meat in the dirty mud outside the truck-stop 2 days ago he casually picked it up amd ate it, saying that he had eaten so much mud flung-up from his front tyre that he had no problem with eating a little more
mud) and then Pie found some old racing MX-bike cluth and after measuring the stacking hight, and comparing this to the technical info he got from the workshop computer, he made a “cocktail of clutch plates and popped them in, then the oil was changed and we were on our way again. 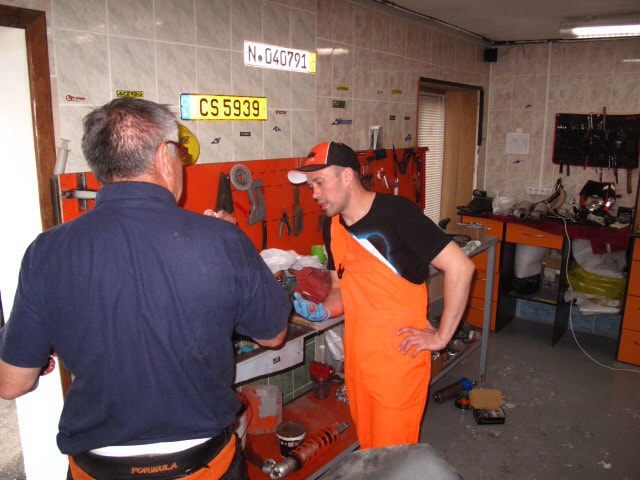 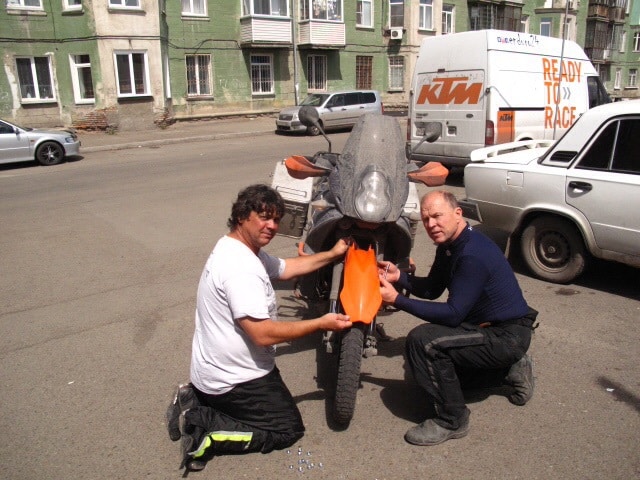 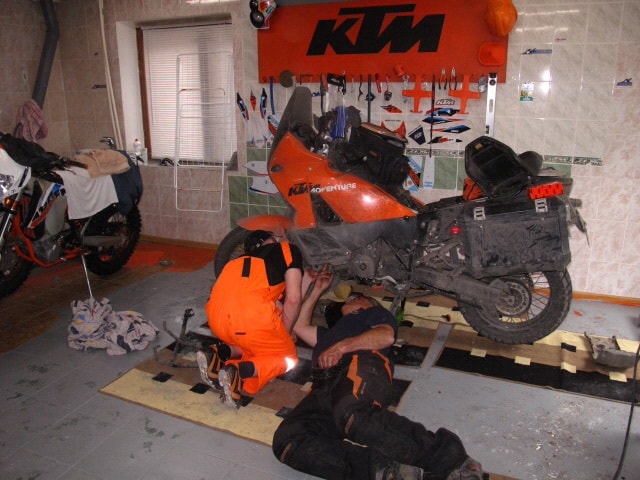 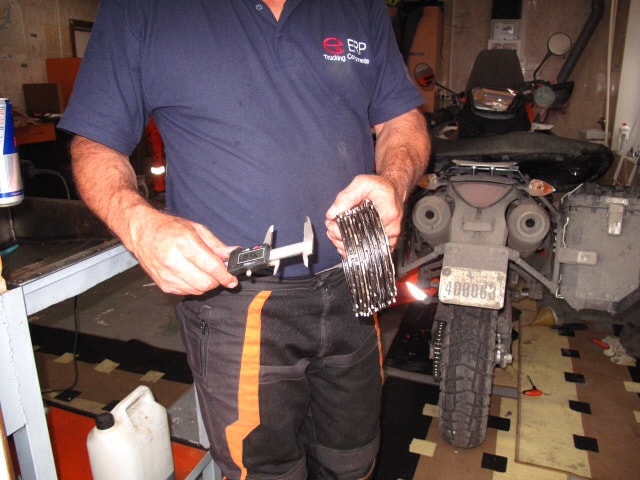 Then we stopped to get the bikes and riding-gear cleaned. 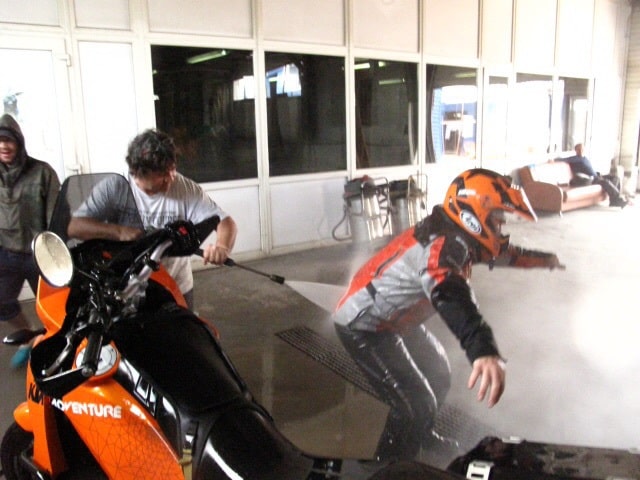 But it was now past 15h00 and we were blessed with an amazing road, still the main road, the M53, but now it is even more remote with even less trucks and Siberia has now developed hills, and now it has bends in the road as it now snakes through farm-lands, big weat fields line the road, streching at least a kilometer on both sides before the forest starts again.

But we are remote and you have to plan your fuel stops as the garages are not like back-home. The first difference is the price, fuel here costs less,than R9-50 per litre, the second difference is that the opporator sits in a little house and security is a big issue, burglar bars and cameras, and you never know if the place is open, always looks closed. When you discover they are open you need to pay a deposit. Then as you lift the pump handle to try and pump the fuel, the dragon behind the glass starts speaking to you, via a loudhailer intercom, in Russia, to do something, but you dont know what, so after re-starting pump, and and shaking nozzle you realise dragon wants you to move to the other pump, then all bikes move (we figured-out it was much easier to get one pump to work and split the fuel bill than paying 5 deposits and 5 guys being shouted at) and the the dragon does what os so common in a foreighn country, “if they dont understand you, then shout, over loud-hailer of possible.”

Today I had the pleasure to see old Rocky, who is Mr. calm, and Mr. logic lose it when rhe dragon shouted to is in Russia to do something, he marched up to the window and told the dragon to either make ot work or refund our deposit.

We only got fuel three stops later, I suspect mot all the tanks has fuel and some pumps dont work, so stopping next to a fuel pump does not mean you cam fill-up, you need to pay a deposit, then dragon directs you to a pump, then the instructions follow as the pumps stop half way and then dragon shouts to re-start pump,and at the end, dragon shouts for you to use the wire and fasten nozzle to side of pump as it can no longer be slotted into the side of the pump. 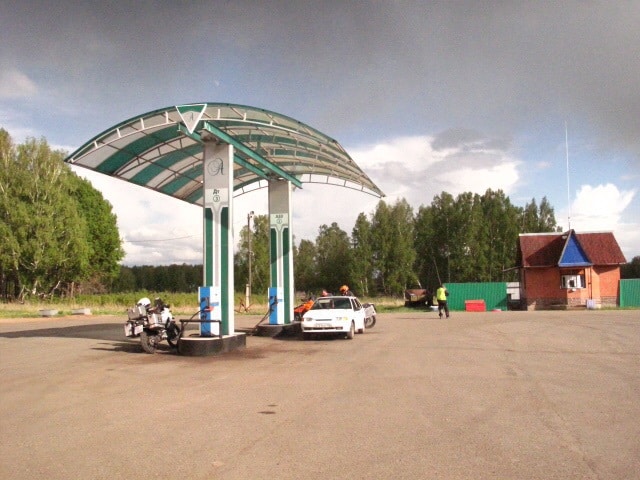 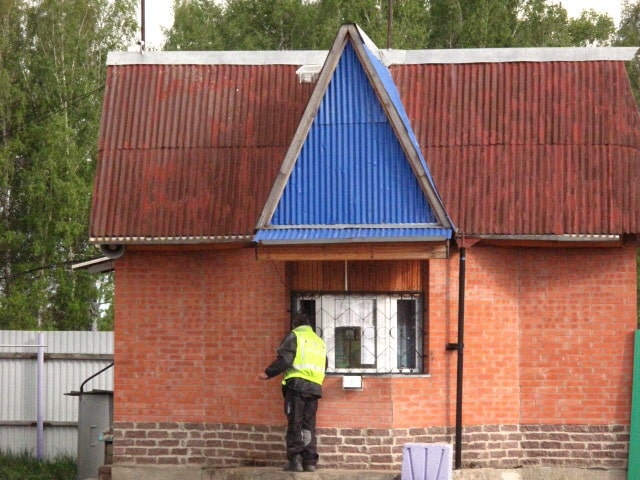 It is now 01h00 and I need to go and sleep, but I have to post some photos of the people we met tonight. Our hotel is rated a 5 Star hotel tonight, but it costs just a little more than Concordia Hotel in Hillbrow, yet it is next to a river, has nightgowns and slippers in the room with a fully stocked mini bar, but as we say drinking a beer at the river, we were followd by the local biker who came to welcome us, then the local wedding party stopped for their photos, and then a group of about 10 kids walked over, 3 girls amd 7 boys, and in brokem English the one girl asked,me if she can take a “selfie” with me, she is 14, I agreed, then the group came and asked us how much it costs to travel, Peens then shocked them witn his wisdom when he told them they should all travel even if they have no money and that they could sleep in a tent and next to the road. (Later we heard a biker was killed in his tent 2 days ago, 200km from here.)

But back to the kids, we spoke and they all could speak a little English, very proud they were, and a lot of posing for photos later I decided to give the 1st girl a little gift from Africa, a green beaded wrist bracelet. I explained to the rest of the group who would be getting nothing (I gave them some biltong later) that the gift was for her as she was tne first who had the courage to approach me and that is why I am giving it to her. Not in my wildest dreams would ai have been able to predict her reaction, ( or then mine,) as when I tied it around her wrist she grabbed me and gave me a huge hugg, and then as she let go, she looked at it again and turned back for another hug, by this stage I was in tears as I was missing my two girls so much and this 14 year old was just younger than my two girls, so it was just so “close to home” and I wished my dream was smaller than this huge dream I have. 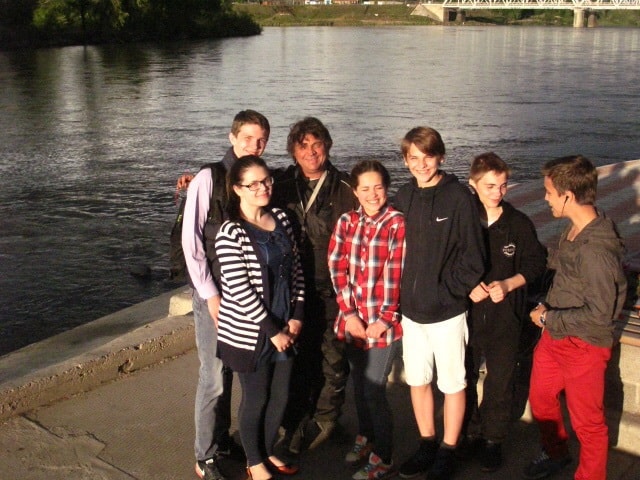 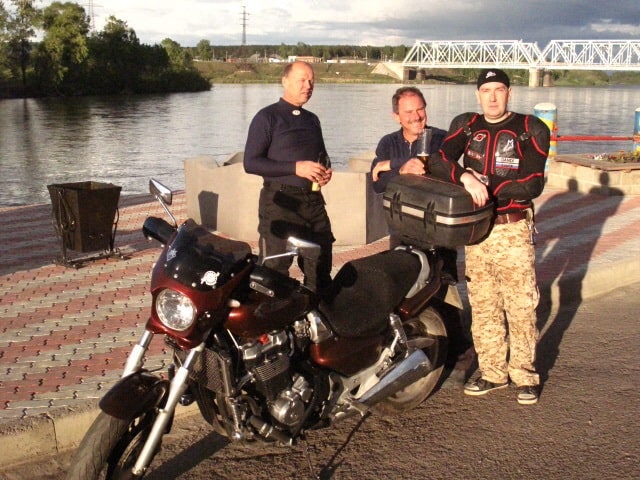