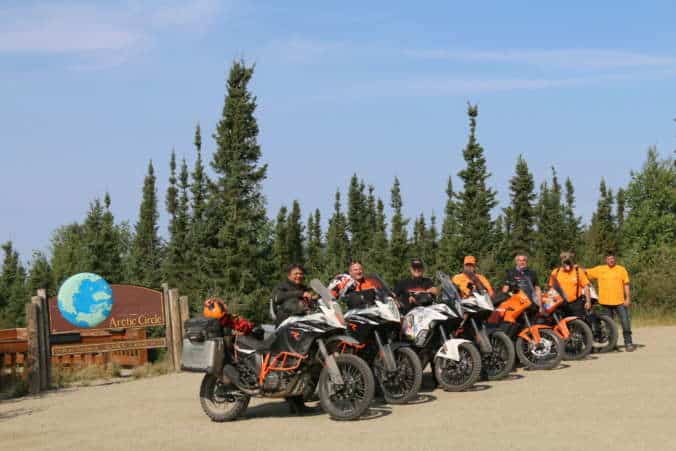 Yesterday afternoon while I was doing the Blog, the team went in search for tubes, tyre-levers and a few things we might need should we have a break-down or flat tyre along the way. We have heard some horrific stories of the Dalton High-Way, it is on every American Adventure Rider’s Bucket-List, and I suppose, it is similar to us in South Africa, who’s right of passage is to ride up Sani Pass and through Lesotho. There is a TV Program called “Ice Road Truckers” and the Dalton High-Way features prominently in the program. The road is very dangerous in the winter as the trucks have to stop before every up-hill and then they have to put on the snow-chains on every one of the wheels, and then when they have to take it off again once they have driven over the hill.

We travelled along the Oil-Pipeline the whole day. This is the pipe-line that takes the oil from Dead Horse to Valdes (in the South near Anchorage.) Everything along this road is marked in relation to the pipe-line, so signs we saw were “Pump Station 5” “Check Point 105” and “Pipe Maintenance Station.”

We started-off on the Eliot Highway for the 1st 80 miles before we reached the infamous Dalton Highway. There was a lot of road-works and construction along the way, a lot of stop-starts (following ) which made the going slow, and dangerous as they sprayed the clay-like road surface with water, just to test our riding abilities.

At one Stop & Follow, we had a 15-minute wait and chatted to the lady manning the Stop-sign. She had plenty of Anti-Mozzi coils\stuff burning on the back of her truck, plus she had a big “Zapper” for when they got too bad. She told us that she works only for the Summer and that she then gets enough ‘time on the job” to still qualify for all her State Medical Insurance. She was very interesting, she told us at which Pump-Station we should stop, where there are Grizzly’s on-route that stays close to the road, and that the road maintenance in the Winter is much more as the trucking increases in the Winter (due to the fact that the sea freeze and the trucks can then drive right up to the oil-rigs to drop-off and collect.)

We rode about 300km on the Dalton Highway, its road surface is mostly good gravel, but it often becomes bad tar, potholed, and much worse than the gravel, but every now-and-then the good gravel would be covered in lose gravel, and one had to be WIDE-AWAKE!!!!  We are only half way tonight, in Wiseman, but we found the road very easy compared to what we expected. BUT, we were luck, it was dry, if we had rain it would have been another story.

But we had , which made the visibility very poor, at some places I could only see 50 meters ahead. There was plenty of forest fires and the smoke just hung in the valleys as there was no wind.

We had a fuel-stop along the way at a little truck-stop just after we crossed the Yukon River, the place had so much character and the food was very good, it was a rather interesting fuel-pump:

We ate breakfast, and guess who walked in? Peens had caught-us, and for the rest of the day we had to listen to all his fishing stories and drama with the Customs at the Border crossing (he dropped his bike just after having his passport stamped, and then he got detained, they suspected he had been smoking Dagga, and then he was searched and his bike un-packed in search of contraband they suspected he was smuggling.  And then they did not return his Passport (probably by accident) and when he discovered it he was two days away, so he had even more drama to arrange that he could pick it up on the way back. Luckily he had a 2nd Passport that he could use to enter the USA.

I took a stroll to the river where there was a local Inuit fisherman who stayed on the river in this little house. This area was also the place where the Barge dropped items as it is easier to bring supplies in by river than by road.

We stopped at the Arctic Circle, and it was very different the last time we entered the Arctic Circle (in Norway.) There was a Visitors Centre selling everything branded with “Arctic Circle Logo,” and a big restaurant, but today there was only a sign, which gave us a nice photo opportunity. So tonight the sun wont set and it will be light the whole night.

The last fuel stop until Dead Horse was at a place called Cold Feet. It is a Truck-Stop and restaurant and there is also a Post Office. Our Server told us that 4 Truckers that she knows have already died this season in accidents, plus a Chinese Tourist was flattened by a truck when he was taking a Selfie in the middle of the gravel road. Our server also told us that her appendix (Blinde-Derm) burst a while ago and she was lucky that a Bush-Pilot flew her to Fairbanks.

Not all the bikers before us had a easy trip, this BMW was lying next to the road, wrecked, I sincerely hope this biker was OK and had buddies to get him to the hospital about 400km away.

Our accommodation with Clutch in Wiseman turned out to only have 3 beds, so Rocky, Peens and I found a little B&B just over the bridge, small little rooms and communal Toilets and Showers, but in between the local’s houses, very interesting indeed, I will take some photos on our way back and post them.

The lady from our B&B tells us that there is a very large population of Snow Shoe Hares (type of rabbit)  in the area at the moment which means that the Lynx population is now much higher because there are so much more Hares. She say there is a cycle of about 15 years, then there is one very severe winter and most hares die, then the lynx die as there are not enough food (and they have smaller litters) and then over years the population of Hares increase again, and so do the Lynx polulation.