Cinderella !!!! From the Disney story, that was who I felt like last night, but the chores I had to do last night  was not the other guys washing, (I hope there was no one that believed that,) involved a bit of admin, some internet banking and a few other things work related.

The team went to the local Ice Hockey Game and here are some photos: 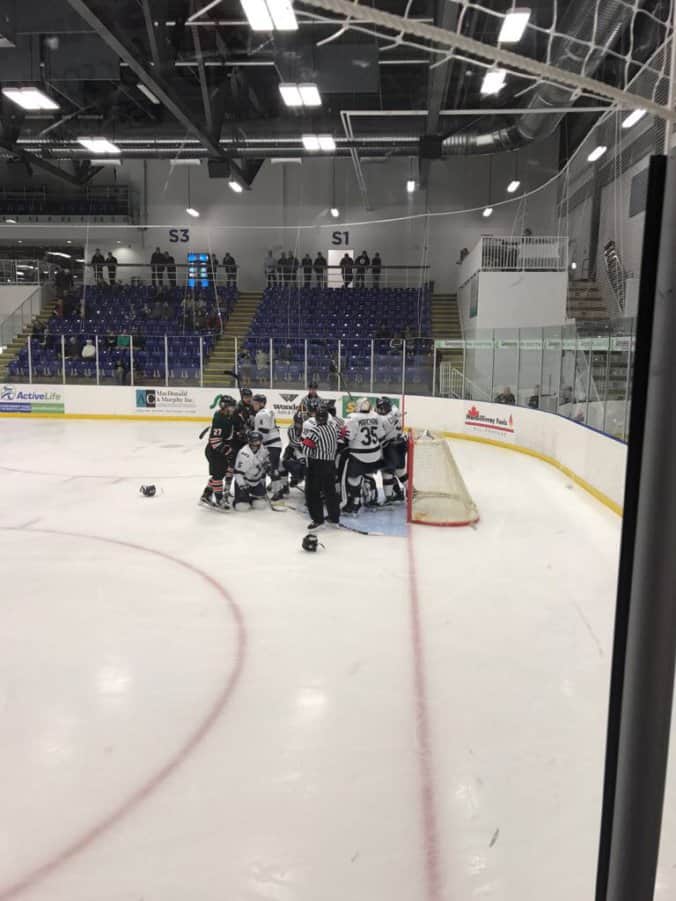 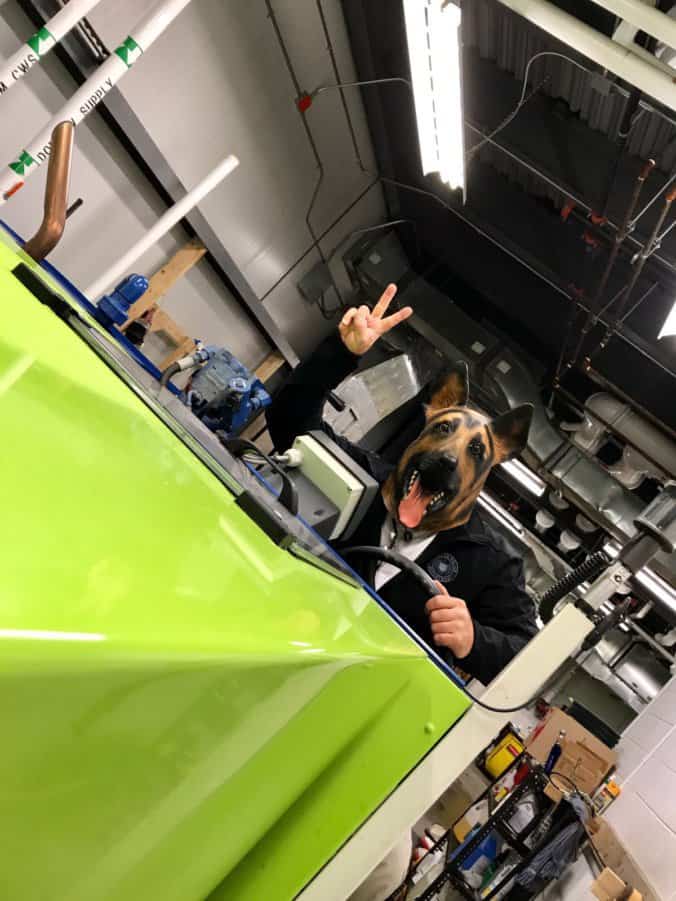 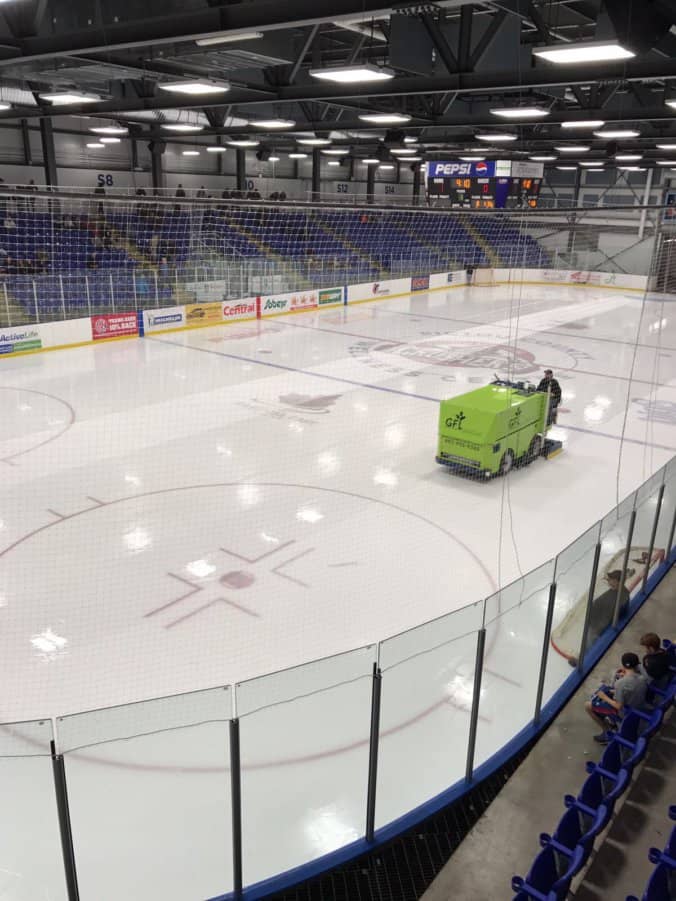 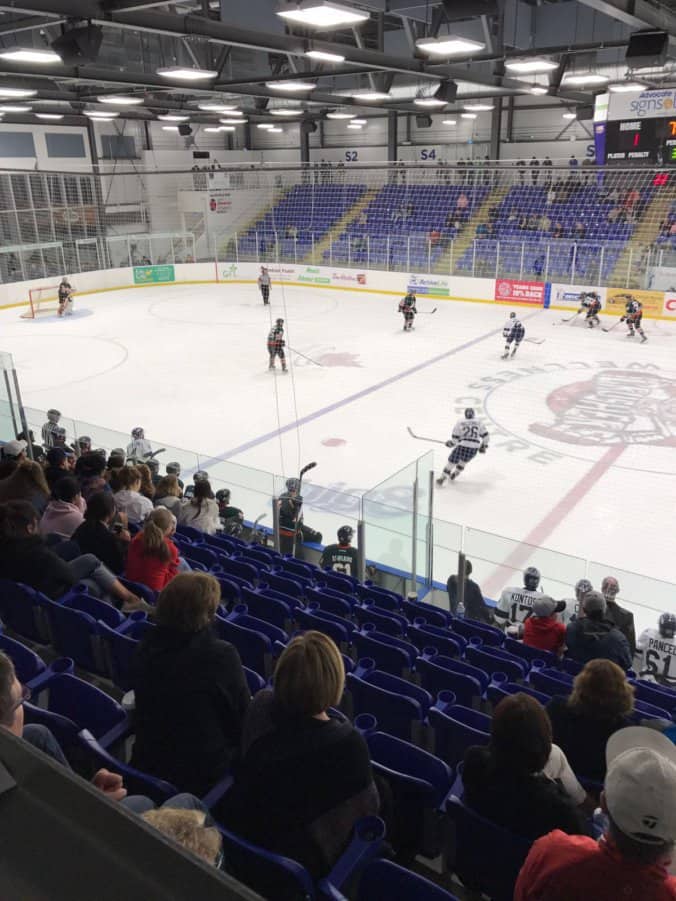 The ghosts did not interfere with our sleep last night and we all looked at the map this morning over a weak cup of coffee and and old bread-roll. Due to the problem with Peters tire we decided to as a team ride on the highway to the biggest town on our route today Moncton and see if they had an 18 Inch Adventure Motorbike Back Tire. We found a Bike-shop on the internet called Toys For Big Boys and that is where we headed. They did have an 18″ but it was for a Super-Bike (big street bike) and not an Adventure Bike tire, and apart from not having any Nobbly’s it was also much narrower. Beggars cant be choosers, so on the tire went. While we were waiting for it to be fitted we walked through the shop, it was very impressive, like Sloan’s this shop also covered all bikes but was especially big on Harley Davidson’s and also stocked a wide range of Harley clothing. I just want to inform the people back home in South Africa reading this laughing at the word Harley Davidson, here in the USA and Canada it is a different brand to what we have become to understand as Harley Davidson, firstly it is the biggest seller by far, and the guys here buy then to ride and tour and commute with, back home one buy a Harley if you have a fetish for leather or tassels, or if you hit a mid-life crisis, and to ride to a coffee shop on a Saturday, well not here, here it is for serious bikers.

We also met the owner who told us that they were holding a party for all their customers just as a truck doing the catering was pulling into the parking area. They run a good set-up and were very friendly, they immediately fitted Pie’s tire, and then when they did not have any puncture repair kits (for tubeless tires) the owner sent someone to go and buy us a few kits, and gave it to us for free. Here are some photos of Toys For Big Boys: 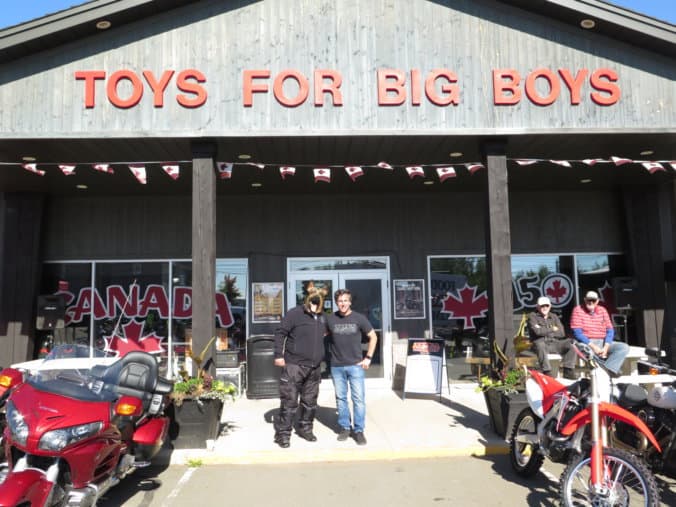 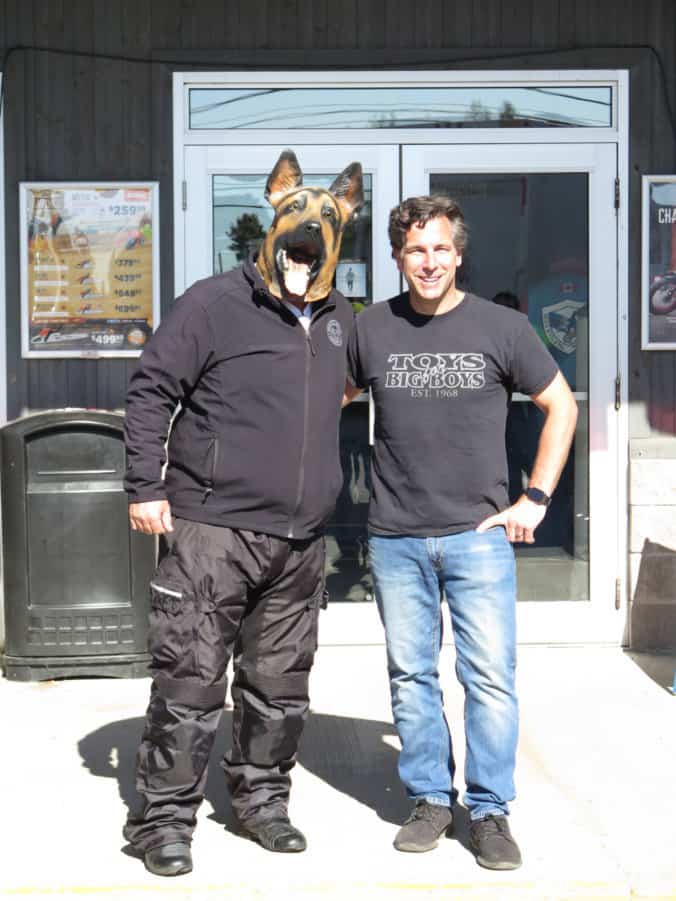 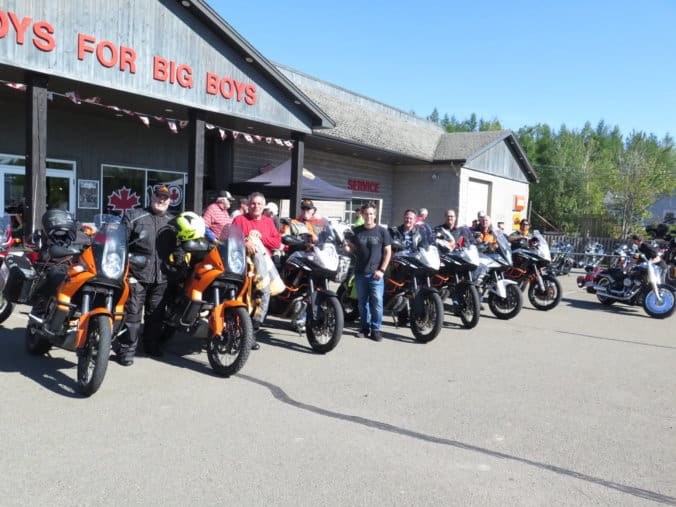 And here is the new street tire that went on to Pie’s bike: 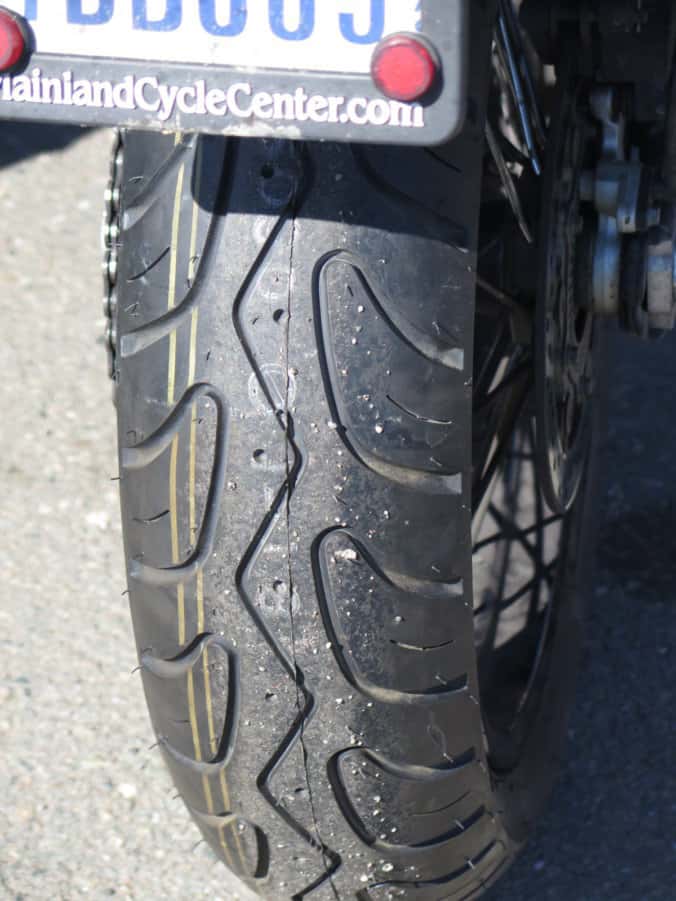 Why would I show you the tire I hear some asking? Well, it is because old Murphy (from Murphy’s Law  fame) was still sitting on the back of Pie’s bike and our tire troubles had actually just started.

We decied to do back-roads for the rest of the day and split into two groups, those who wanted to get to the hotel before dark came with me and poor Rocky and Hennie followed Peens on a “Scenic Coastal Route” with extra curves.  I can however not report on their ride as they have still not arrived as I am writing this Blog, but our road took us past several small towns and it was evident the people enjoy their summer by playing in the mud : 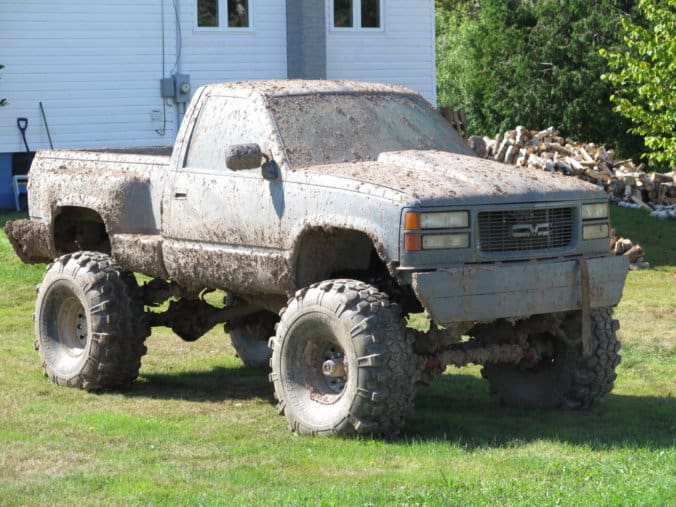 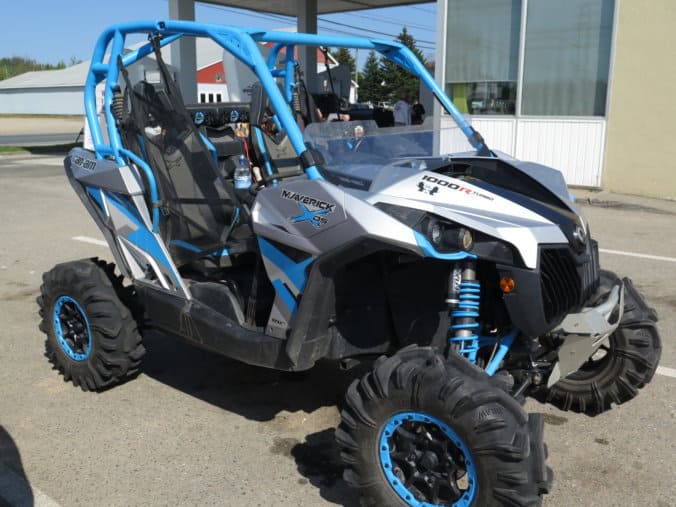 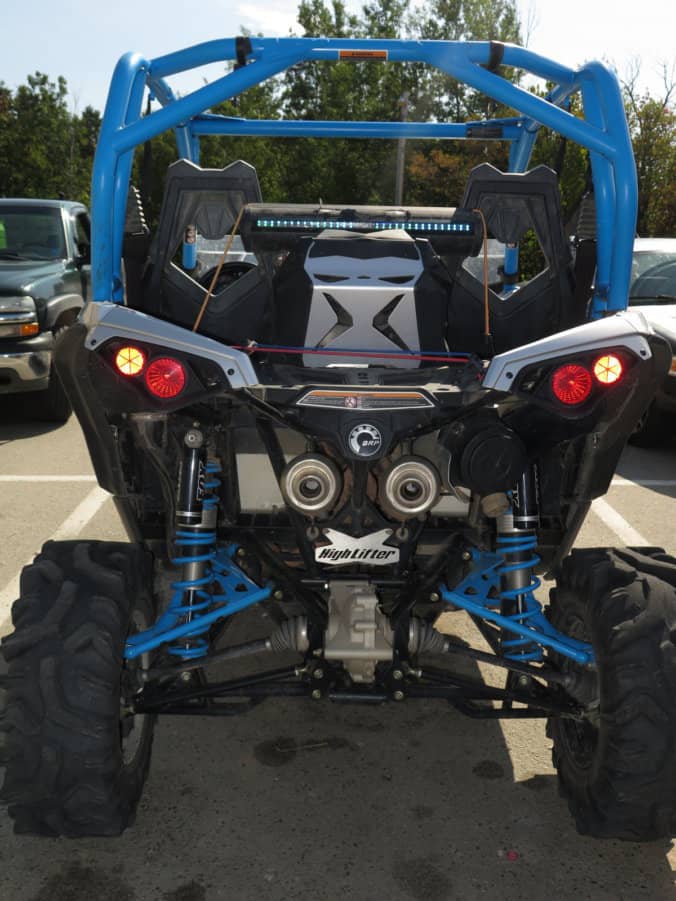 One see these on the back of their Bakkies (pick-up’s) and on trailers and they even have little roads for them next to the main road with little road-signs should their owners want to come into town to buy a loaf of bread before going to play in the mud. 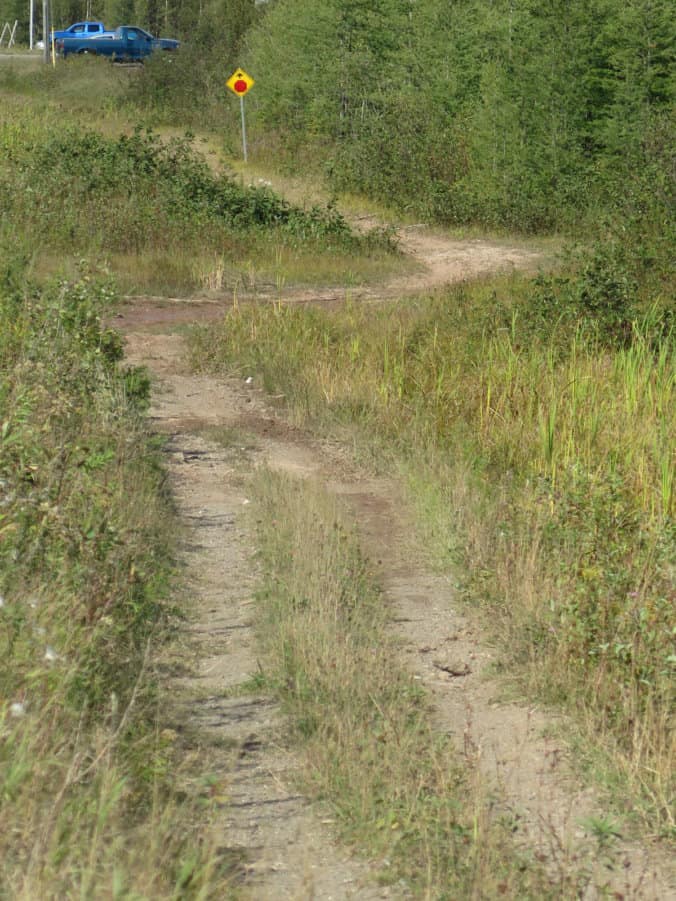 My Pumpkin photo of today is taken at a house where the owners have moved in but the outer skin of wood still needs to be placed on the outside of the insulation and inner walls. I can understand why almost all the houses in the USA and Canada are built out of wood, it it just in such abundance, we rode the whole day and apart from maybe half an hour when we were between farms and fields, the rest of the day was spent in forests. 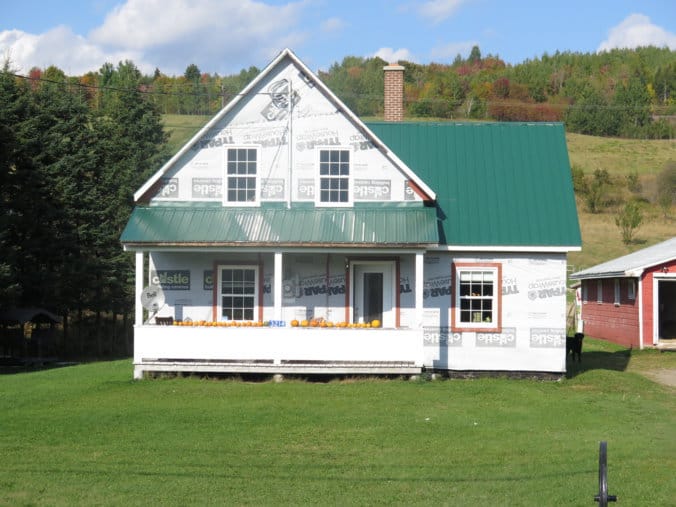 The white walls with the writing is in fact the plastic sheeting protecting the wood partitioning and insulation, it just needs it outer skin, like in this photo below where this owner of the home got his delivery of wood for the winter which he will be packing away this weekend : 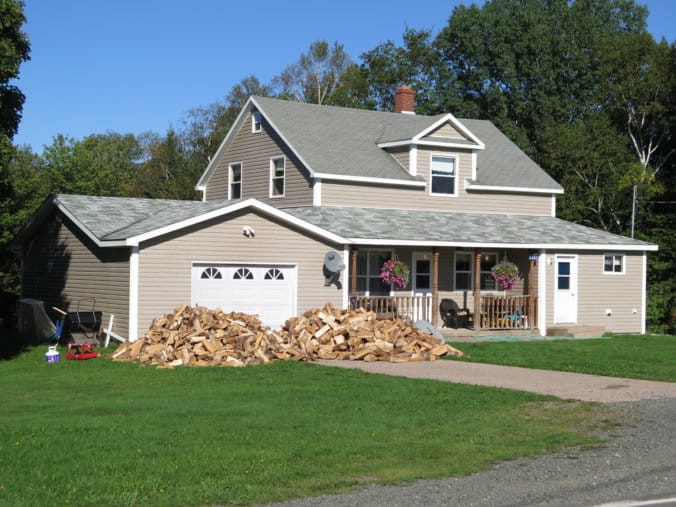 See the outer skin of wood above.

But then Suzi my trusted GPS who I instructed to take us on the Shortest Route took us on a gravel road. 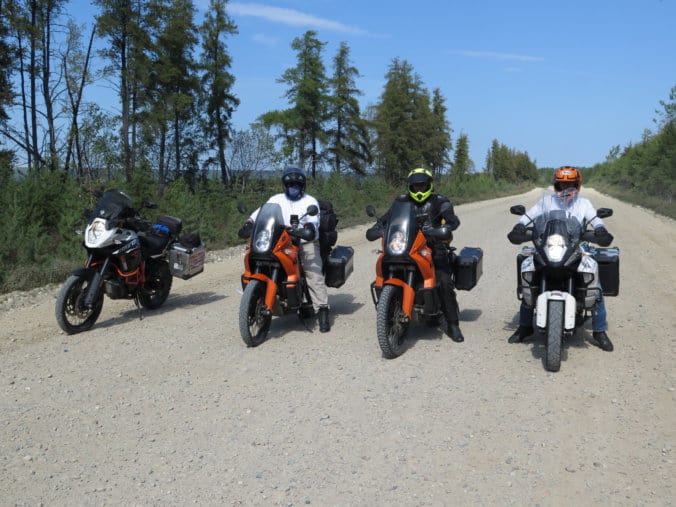 It started with all in high spirits even though we knew Pie’s back tire was not made for gravel, and thanks to some miss communication just after our new 1190’s were bought the wrong front tires were put on our bikes which are also not great for gravel, (cant wait for it to come off at the end of this leg.) I told them it would only be 15km but I was wrong, by a lot. 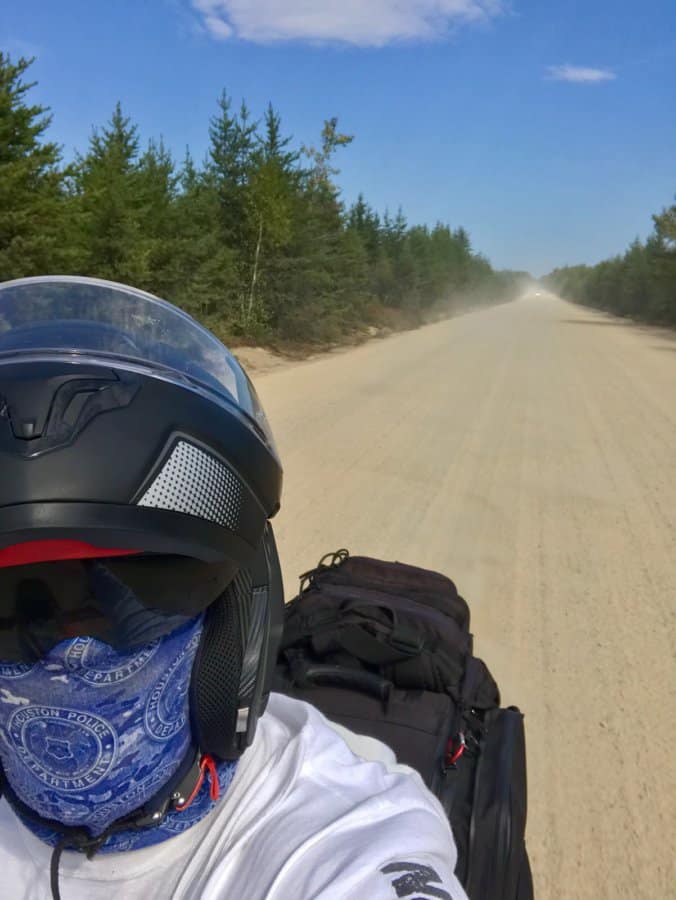 And when we got to a “tar” road, one of those “Fifty Shades of Grey” Tar roads like we had in Russia and the Ukraine, it was bad, and bumpy. So no surprise when Pie got a puncture on the new tyre, we are not sure how this happened, maybe it was due to Oros, Pie not wanting to spend money on a new tube, (a different size for the smaller wheel) or from the rough roads or even if the valve-piepie (don’t know how else to describe it) was maybe not tighten enough,or the way Pie rode the bike and abused it, but what ever the cause, we inflated the tire with Foam, raced to a filling station and pumped it to 4 Bar and limped to the town we are in tonight where we arrived just as all the places were closing, so a few desperate phone calls to dealers here in town came up empty handed except one who did have a tube but it was a Finger-fault as Tex was speaking to a dealership in Edmonton in Alberta province 1000 miles away, the error only showed itself when Tex was asking for directions.

So who knows what tomorrow will bring??? 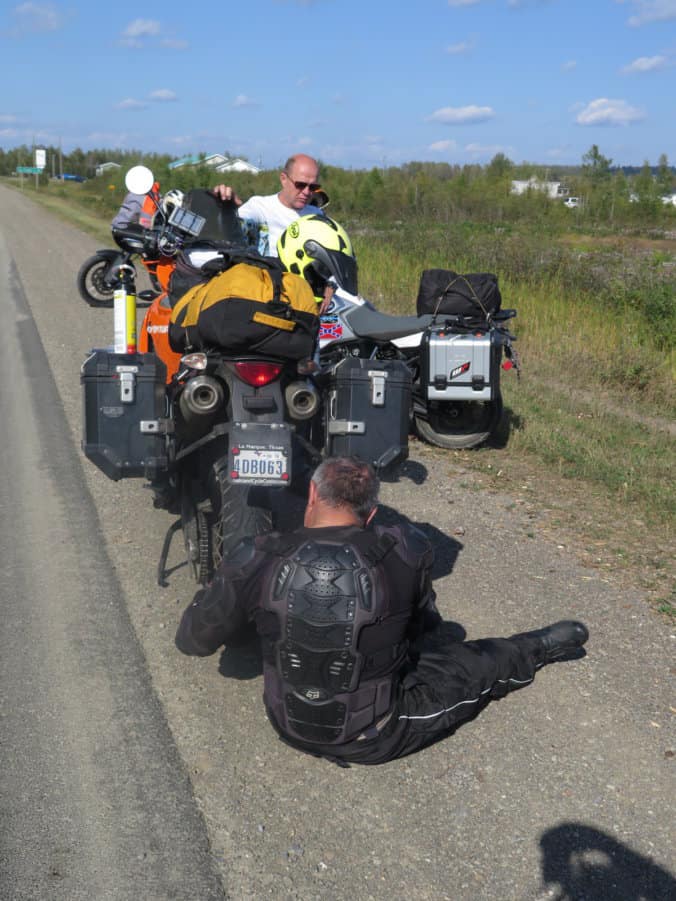 Today in the forest I had my own worries as the signs for the Moose just got more intimidating : 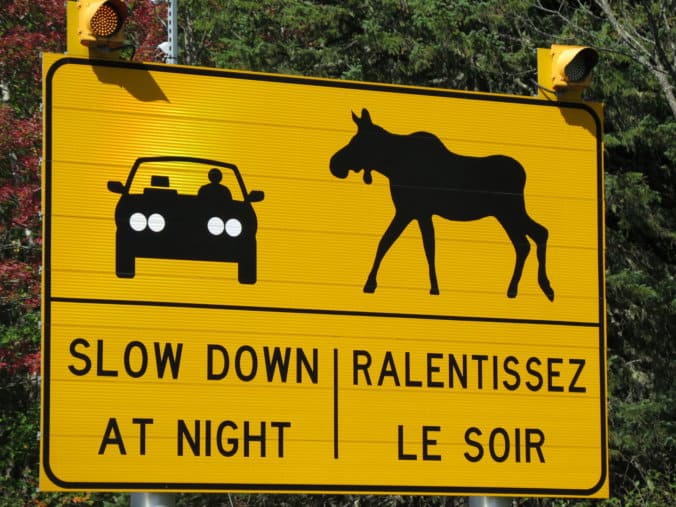