Lets first get the Corrections out of the way of mistakes I made on yesterdays Blog :

And here is a Geography lesson : 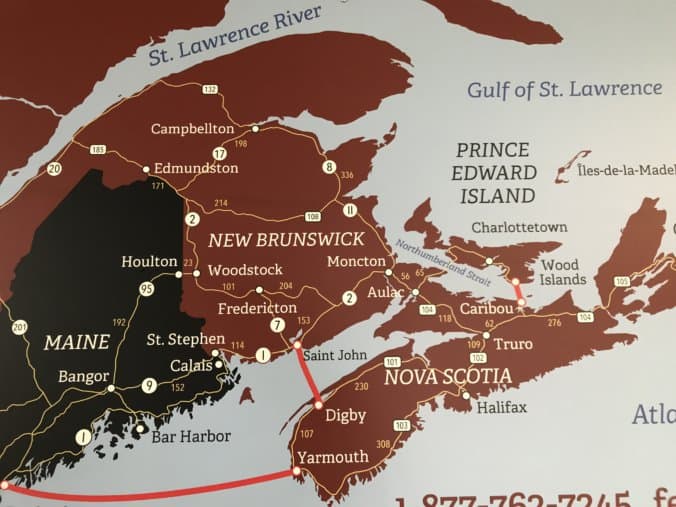 We took the Ferry from Saint John to Digby (short line in red) and then crossed over and rode up the coast past Halixax and up on that horn, then down again and are now heading for New Brunswick, then if we follow the Saint Lawrence River we will reach the Niagara Falls. 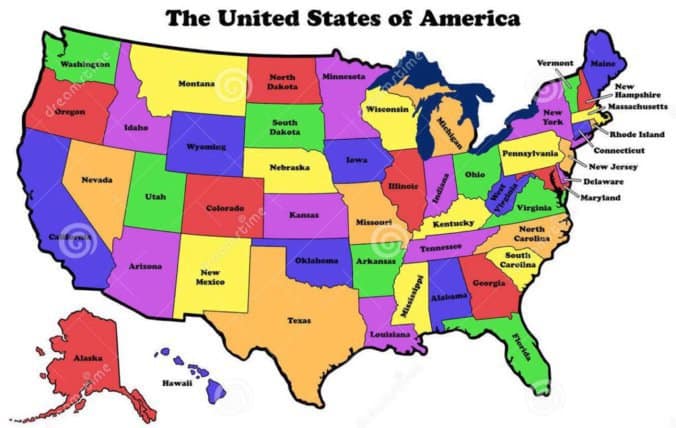 We started in Texas in the middle at the bottom, then followed the Gulf of Mexico through Louisiana, Mississippi, Alabama, Down Florida, then up again on the East side of the map (yes, that is right hand side) and through all those little states in the top right corner before crossing into Canada. And No, Hawaii and Alaska don’t sit under America, it was just drawn this way to fit onto the page, once we get to Alaska I will do another Geography Lesson for all of you who also went to a public Afrikaans school in the late 70s and early eighties. And for all those Americans I asked that also did not know : Washington D.C. the capital of the country is not in any state, it stands on its own in the District Of Colombia, and take note that there is an entire state in the West (yes the left hand side) named Washington but it is 2000km from Washington D.C.

We heard last night that Dog had bought his new helmet in Halifax and mailed the one he borrowed back to Digby. Man he has a Million Dollar Smile !! Dog has been swapping Police Badges with Police that stops them, (pity he is not with us more often as we are the ones people are phoning the police for to stop us, which they then do after chasing us for many kilometers just to warn us that someone phone to tell the police they were given a fright and had to apply brakes as some motorbike was overtaking legally but they still got a freight as it was done to close to them and they could see the overtaking, that is the beauty when there is almost no crime, the police can respond to phone calls involving an overtaking maneuver, in Johannesburg you can try to phone the police but in the half hour it takes for the call to be answered your house can be emptied-out, sad but true.)

Any way, back to the Police Patch, Dog hands them out to police and other people, see below : 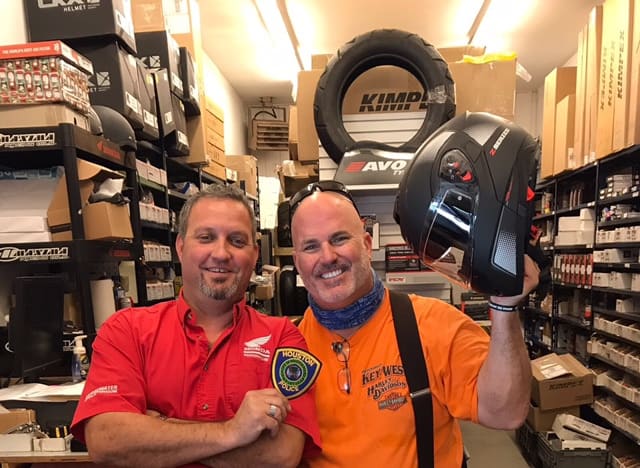 We also communicated via Whats-App with each other to meet at Cape North at 13h00 for lunch, so we had to ride over 350km to get there, and the road was going to be slow and winding, so we skipped breakfast, zipped our jackets inner-Jackets into our jackets and put on our warm-gloves (as apposed to the other pair which are shorter and with more holes to breath through,) and started the engines at 7H00, but that was a big mistake and it was just getting light and the temperature was at 3,5 Degrees, and the 1st time ever with Dad-Ass (my bikes Name for the new followers of this Blog) the Ice-Warning light started flickering every few kilometers or so. And we were riding in fog for almost the 1st hour, but as I was riding in front the fog was not my biggest concern, I had the following on my mind: 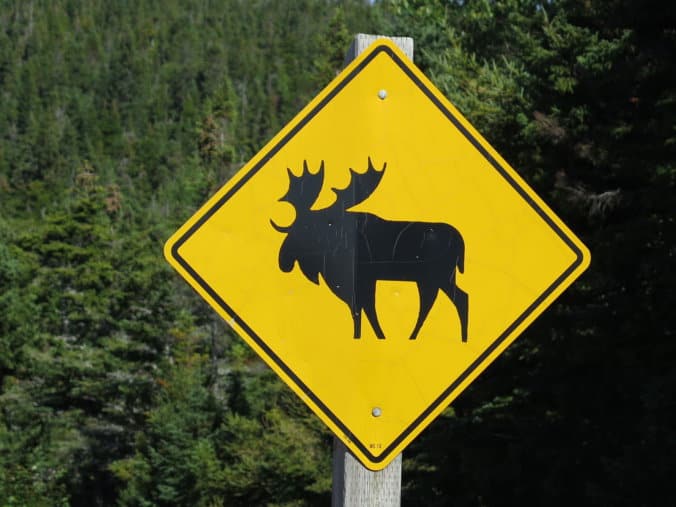 As the sun slowly crept over the horizon, the temperature slowly rose till eventually settling at 17 degrees for most of the day. 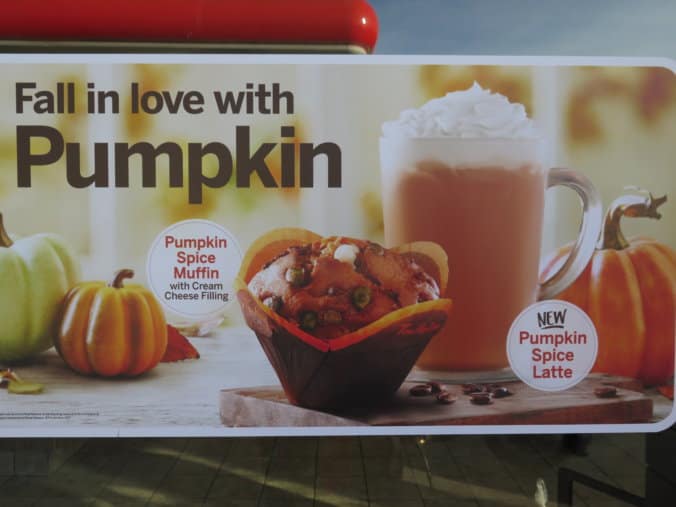 We were heading for the : 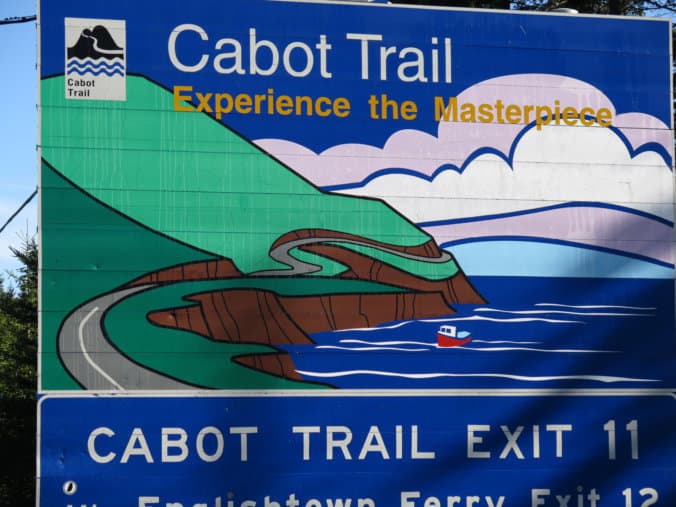 Yesterday we rode the Lighthouse Trail in the morning, then the 4 Black & White Bikes doing the KTM Tour of The World, (not to be confused with the others on the Tour de Studebaker,) rode the Marine Trail, and today was the turn of the most known and popular of them all. There is also a Fleur de Lise Trail and a Chello Trail (I don’t know how to spell this musical instrument, like a large Violin, but have the spelling so far wrong that not even Spell Check knows what the hell I am trying to say.) Remember I told you earlier English 2nd language, and that was in a Public School. 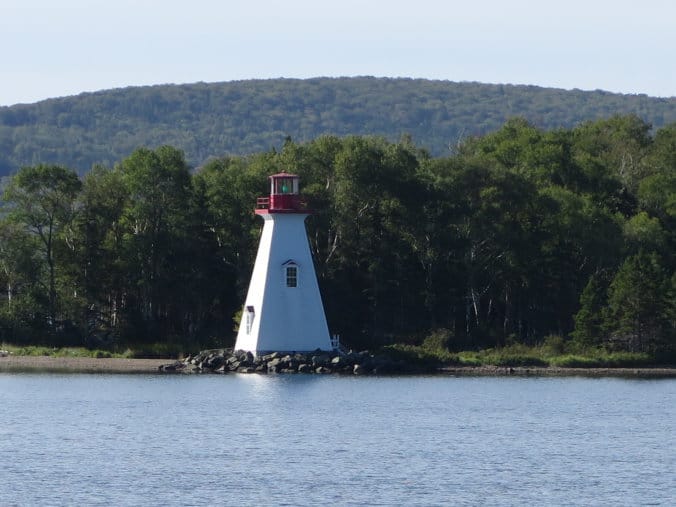 It was a long ride today but must be the ride in the most beautiful area since we rode through Norway, this ride also had all the water, sea and lakes (Loch’s as they call them here in New Scotland,) and with Pine forests on your left and water on your right the whole day, the only difference was that Norway had mountains next to the Fjords and therefore it was more Majestic or impressive reflections in the water, but this day will go down in my book as one of the great rides. 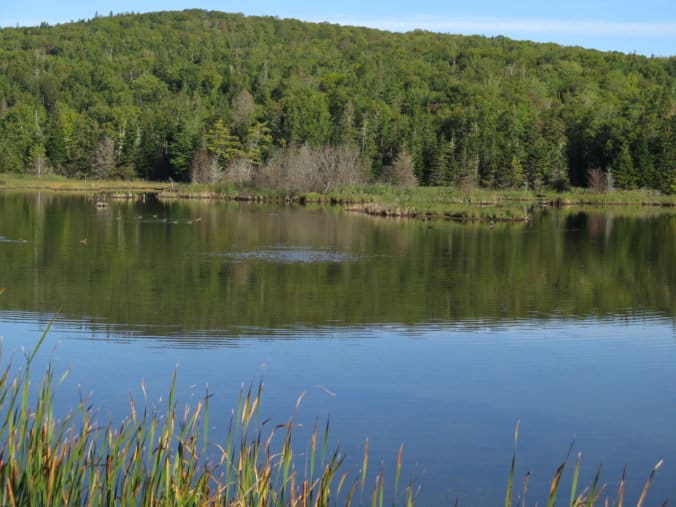 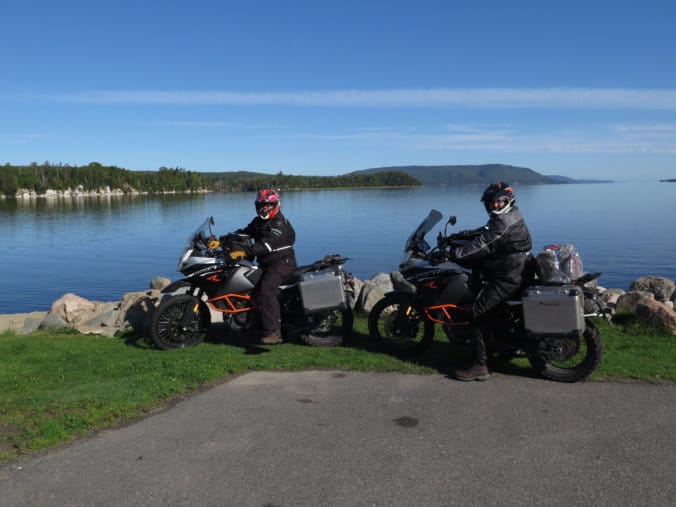 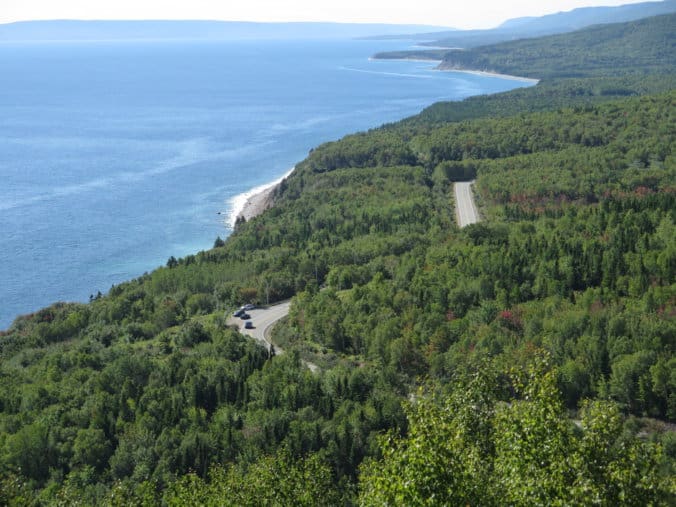 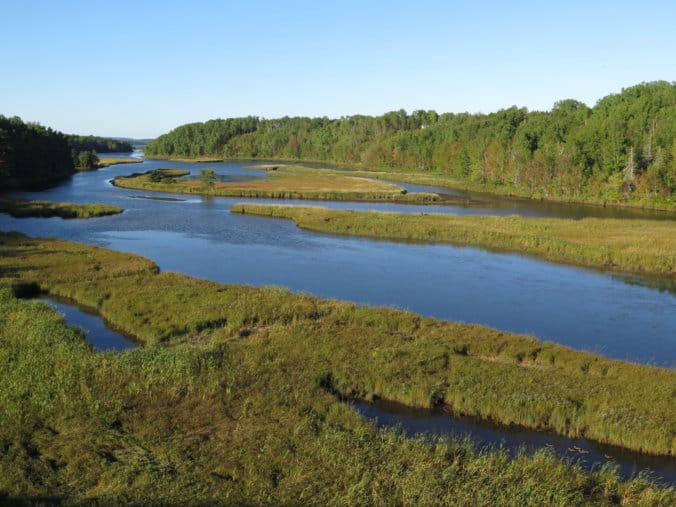 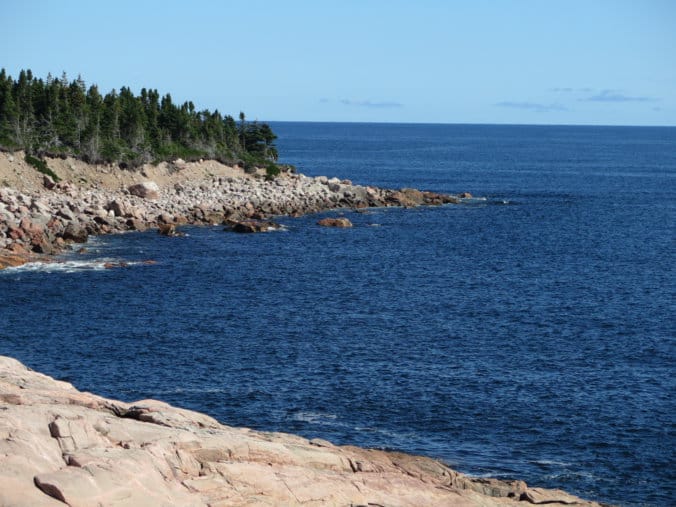 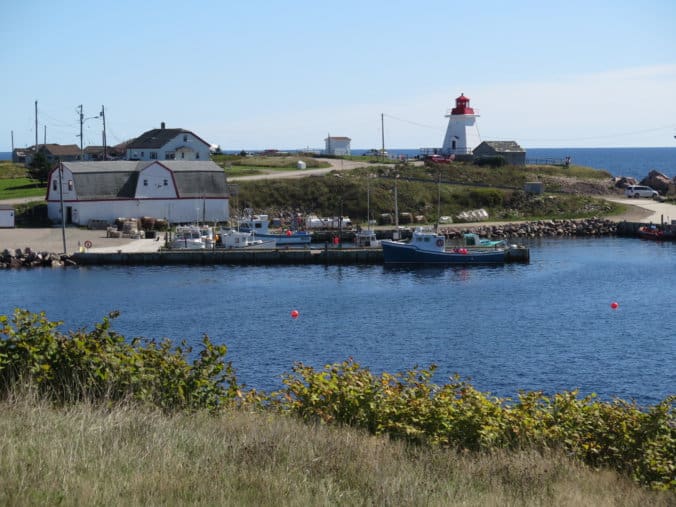 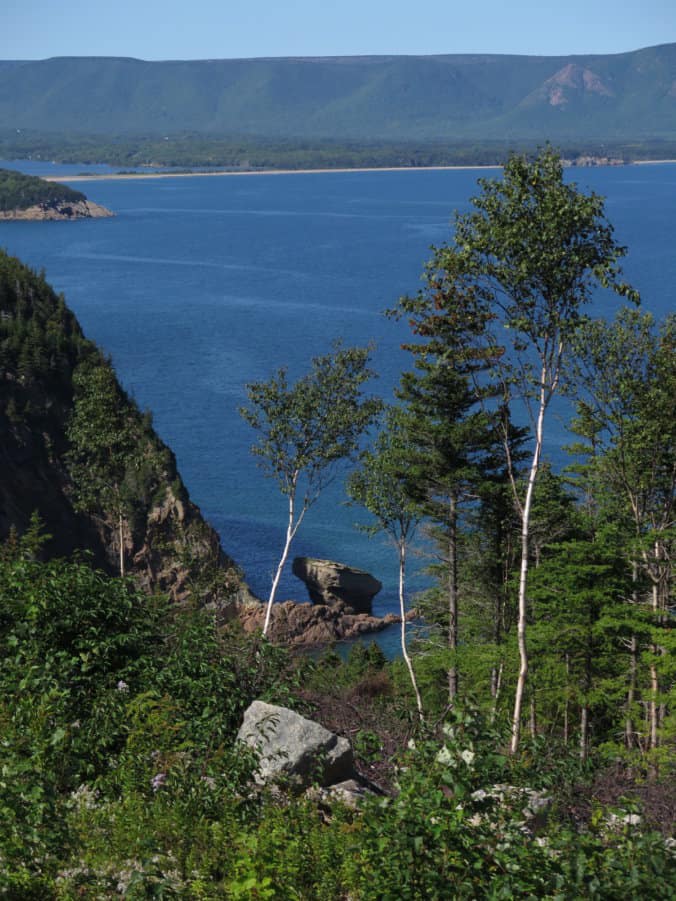 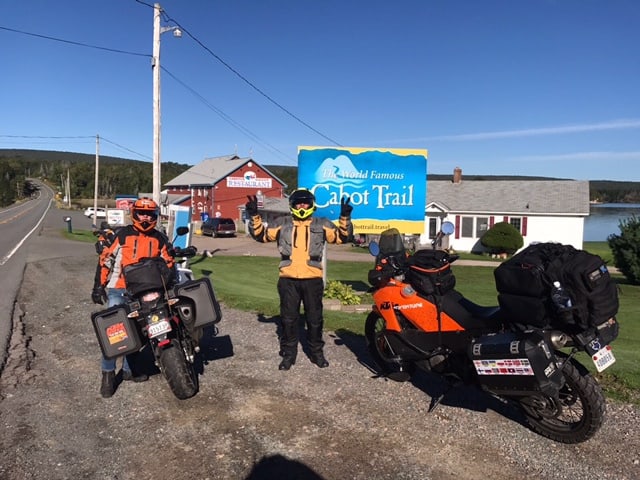 The Cabot Trail is basically a circle route you do around a Peninsula and you end sort of close to where you start the route, this morning we spotted these fishermen fishing near the fish-farm and when we returned several hour later they were exactly where we saw them this morning : 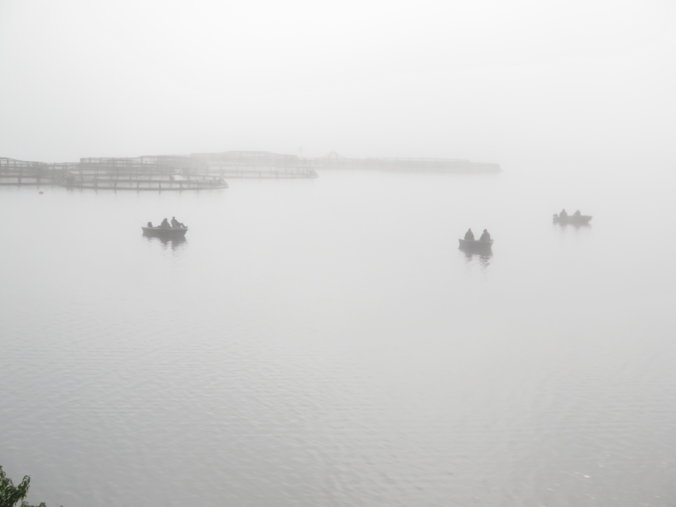 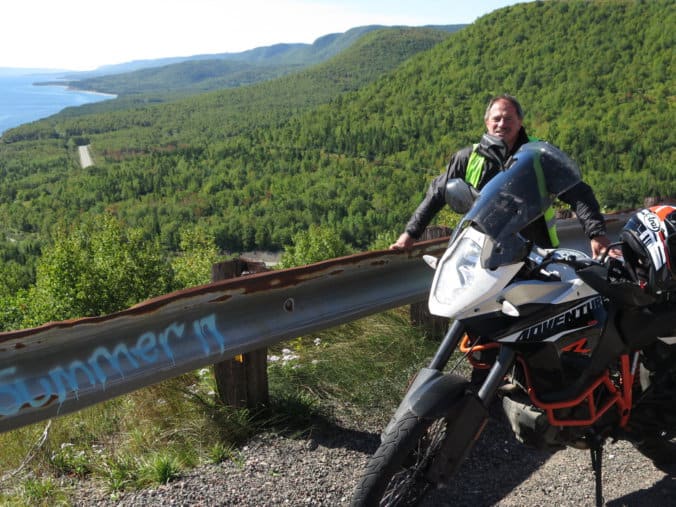 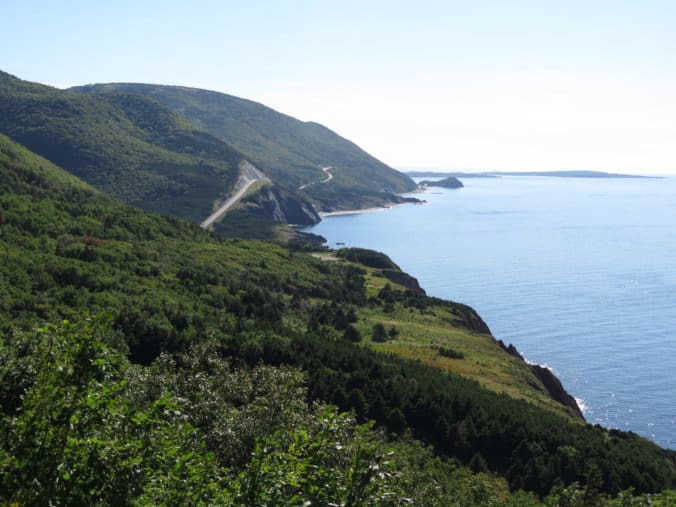 This area reminded me a lot of Scotland, not only the landscape but all the names were Scottish, towns like Inverness (famous in the real Scotland for where you can still up to this day see the Loch Ness Monster, provided you had enough Whisky before the boat-ride on the Loch,) but all the places are named after Mac Donald, Mac Pheerson, Mac This and Mac That, same with all the lakes, named Loch This and Loch That.

But it seems that another person, also from near Scotland, old Murphy, has hitched a ride with the Tour de Studebaker group as poor old Dog has now lost his helmet, had a flat battery yesterday morning, a puncture in the afternoon and now Pie’s back tyre (this is not a spelling mistake, this is the South African spelling of Tire, just as Labour and Colour is not spelt incorrectly here, it is British English and not American English,) is so worn that the canvas is starting to show, so tomorrow there is more admin awaiting us as we will have to hunt-down a tyre in this area where only Harley Davidson’s count and no one have ever hear of a KTM, so the fun continues.

And just for those wondering why there are no lunch photos, it is because there was no lunch today, apart form a slice of Pizza from a Gas Station as a calculation error has shown itself-up, the route planners thought we fly out on Wednesday but in fact it is Tuesday, so now we have to make-up a day’s riding over the next three days, so instead of nice long lunches and only 400km per day we will have to lunch on  Garage Meat-Pies with complementary Rennie’s ( Heartburn Tablets I hope) and a swig of Coke before racing towards Buffalo.

The term “Garage” is a probably lost to some of you, in South Africa a Garage means a Filling Station (or is that a Gas Station, I know Americans put in Gas and we fill up with Petrol,) but even the word Toilet or Gents is met with a blank stare, one should say Rest Rooms or Wash Rooms, just as the word Dustbin confused our “Server” (yes not a waitress) as I was supposed to say Trash Can.

We found some nice Oros Light Budget Accommodation (Oros is our term for Cheap & Nasty) tonight, with special discount on the already discounted rate if we agreed to take the Graveyard Rooms (or is it Cemetery Rooms.) Apparently there are only 4 Ghosts that has been identified but we are OK as they don’t work on Fridays and have never been seen over a weekend, only midweek we are assured (I bet the story on a Wednesday is that the ghosts only do Weekends.) 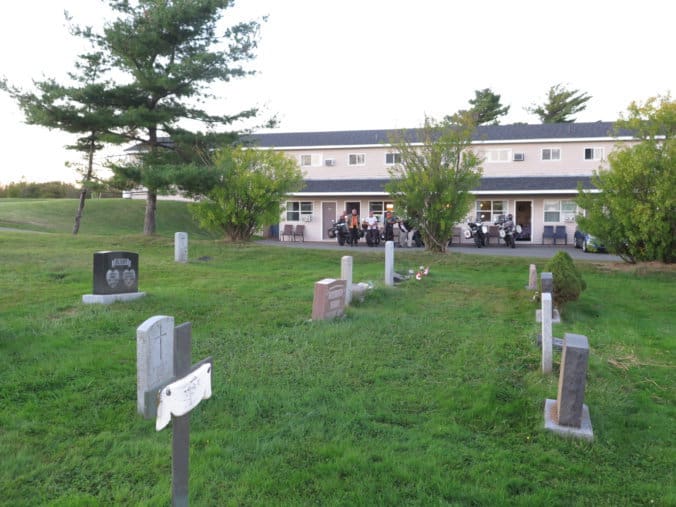 Once again I am missing out on the action as the other guys has gone out and I am left to do the Blog, they heard there was a College Ice Hockey game on and have gone there to watch this, hopefully Dog will take some photos as the rest of the group cant afford cameras. Peens got all excited and dressed for the occasion hoping someone will get injured and that he can go on as a replacement: 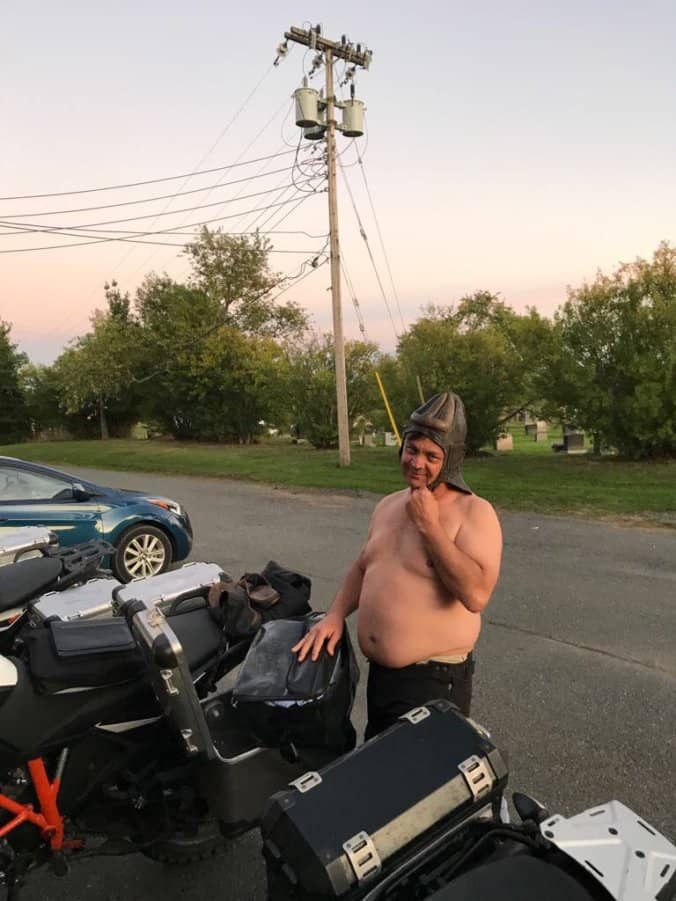 (I photo-shopped his stomach to look much bigger.)

After the Hockey Game they are going out for dinner at a very famous restaurant of this area called “Wendy’s” and I might just get an invite to join them after I have finished my chores of the Blog and doing all their washing and Ironing, (does this sound like a Disney Story………..in Afrikaans it was called Aspoestertjie,) and I will remember the English Name later, might be Sleeping Beauty??? But I will probably have to do some apologies so will mention the correct name then.

There is a big debate about the route as we have two options and Rocky is leaning towards the route through Toronto, I wonder why??????  More about this in future Blog.