We are slowly starting to “get China” and learning everyday, evolving, getting better, getting better at filling-up with fuel, better with our GPS’s (that we now hear are off with the 4 seconds (Degrees, minutes and seconds as measurements with regards to positioning yourself on earth,) on purpose so that the location can not be used for terror attacks, we just have to now find out if it is the owners of the satellites (we suspect they are the USA) or the Communist Chinese Government to blame for all our navigational issues,) we are getting better with communicating with the local people (and the police today) thanks to Tex, (the Bakkie is always behind us so Tony can only help us at night.) We are getting better with understanding the way they drive, swerve, merge, “hit a gap” and even getting better with our aim when using a squatting toilet.

Today we also got better with making-up some time, we once again sneaked up towards the toll booth, the point where you enter the highways, and at the last minute we each chose a lane and opened the gas, unfortunately for me there was an old man sweeping the road approaching the gate and after he shouted and gestured with his hand I thought I was going to be getting a swipe of the broom-handle, but we all made it onto the very famous highway and we were the only bikes on the road and we did get some funny stares, but desperate times calls for desperate measures, (and if we can pull-off this same stunt tomorrow we are home and dry as the distances to Laos we have to travel everyday are getting shorter.) So our rather long day became only 277km which I thought would be very boring, but being high up in the air on their “high-ways” does give you some different view of the landscape and the villages and mountains that you drive by.

We headed straight to the world famous Panda Center. Let me first post a few photos for those who have already decided there are too many lines to read, note the welcoming party waiting for us. 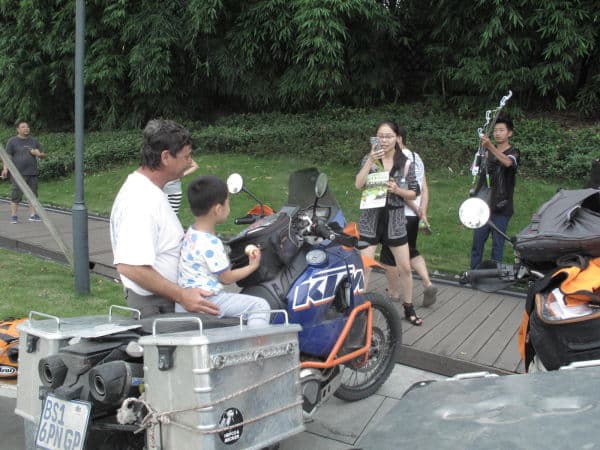 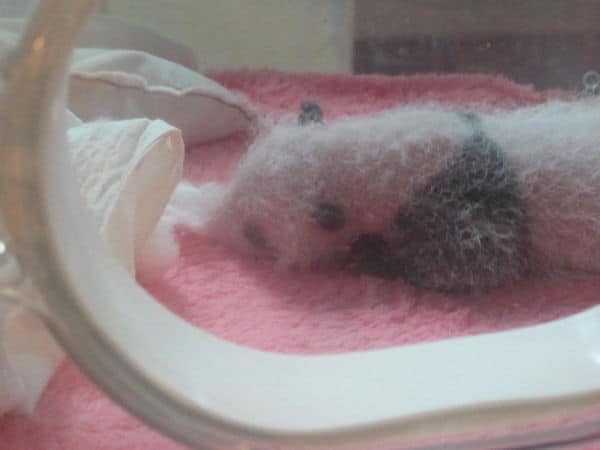 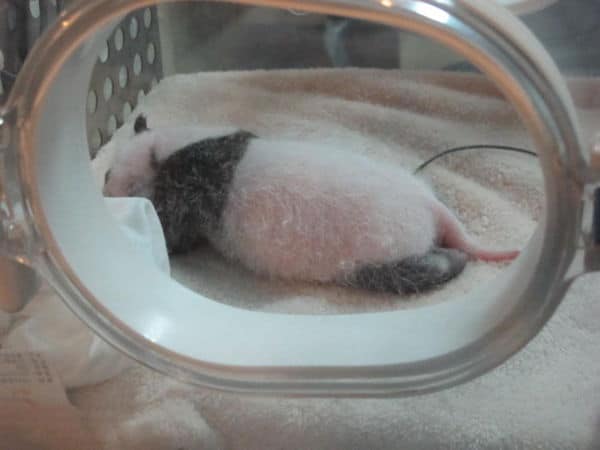 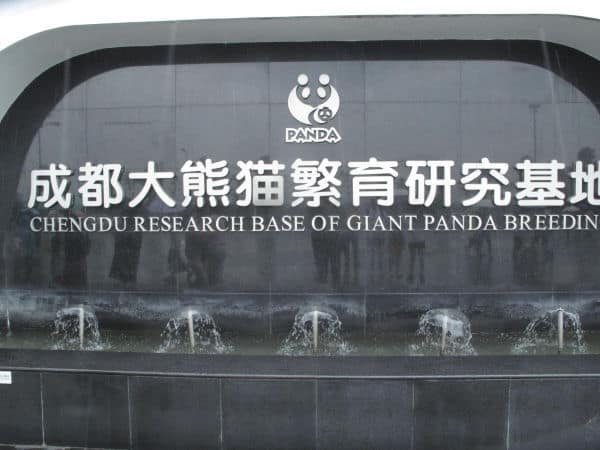 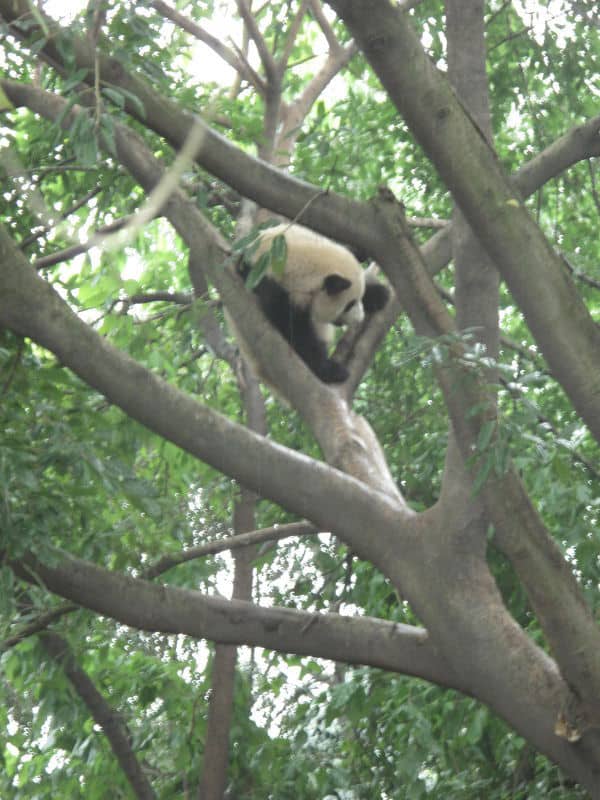 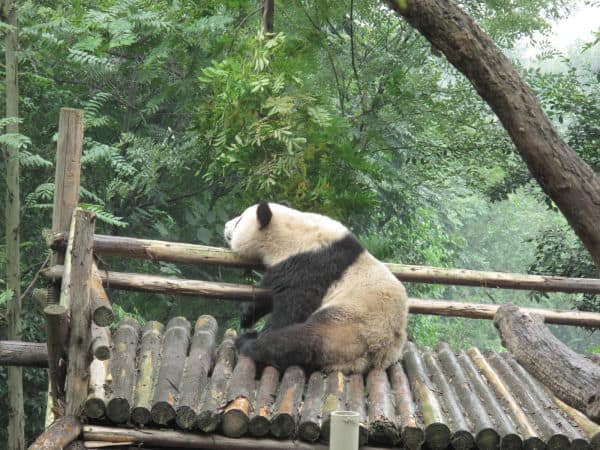 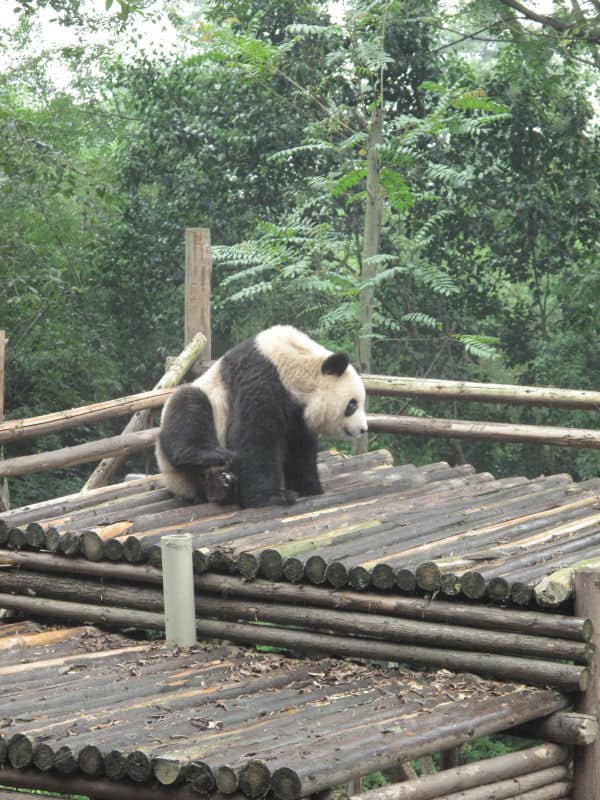 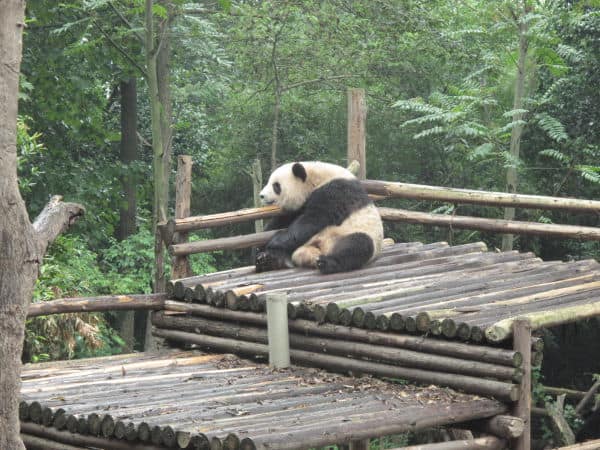 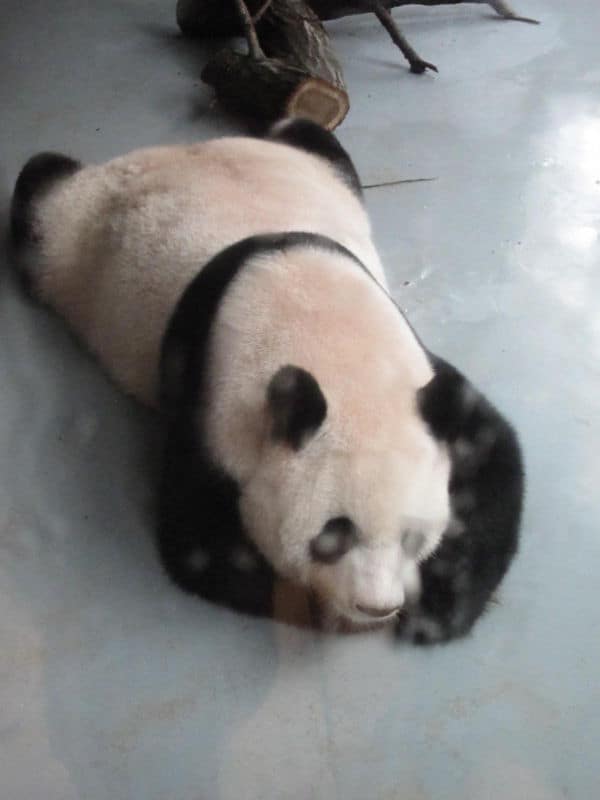 Fast Facts about the Giant Panda :

– they are pregnant for between 5 – 8 months

– when the babies are born the weigh only 100gr

– they make terrible mothers (not a fact they said but rather a deduction I made after seeing the videos showing the mother handle the baby soon after birth, smacking it with its huge paws with the long nails

There is also another species, the Red Panda, and unlike the Giant Panda that was loving the rain and rolling in the wet grass to cool down, the Red Pandas were all hiding from the rain in their enclosures. 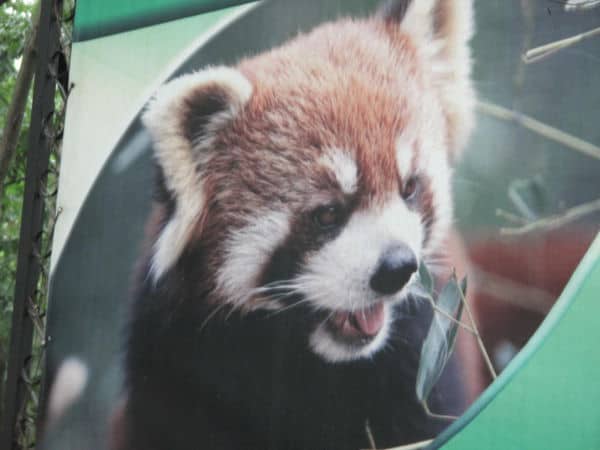 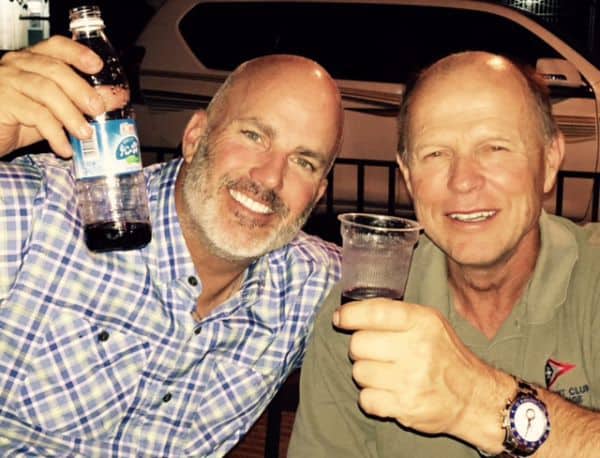 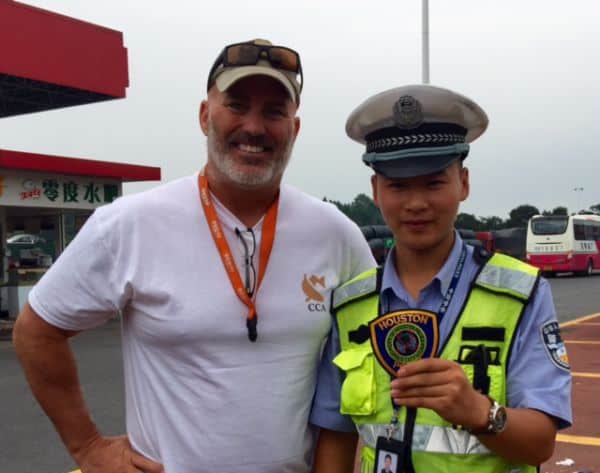 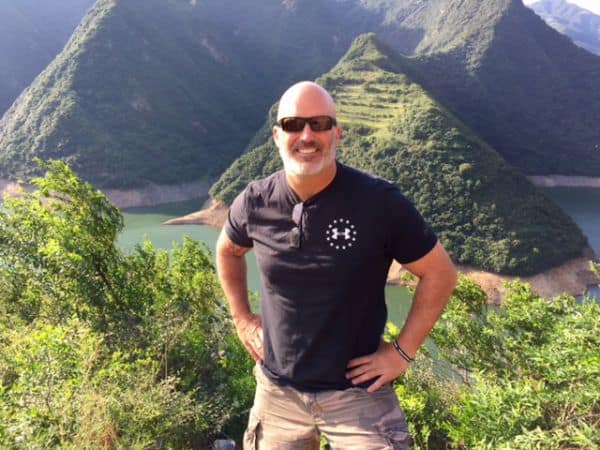 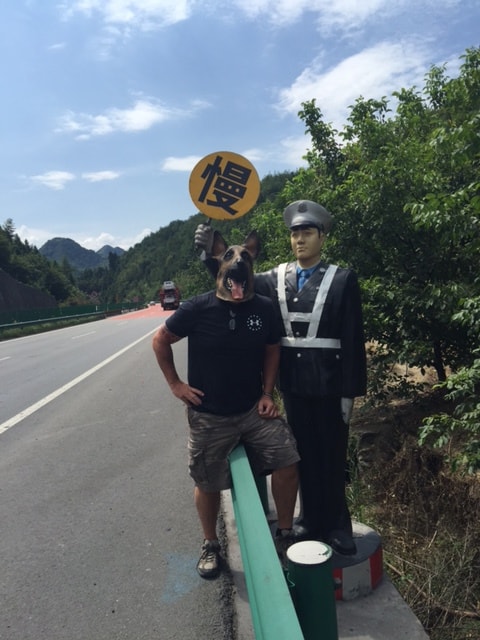 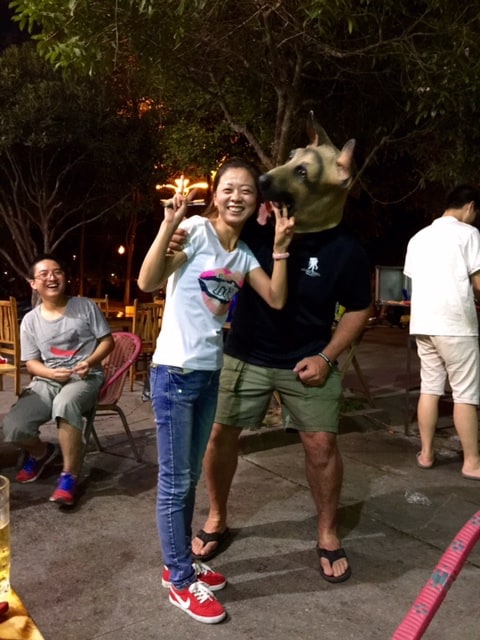 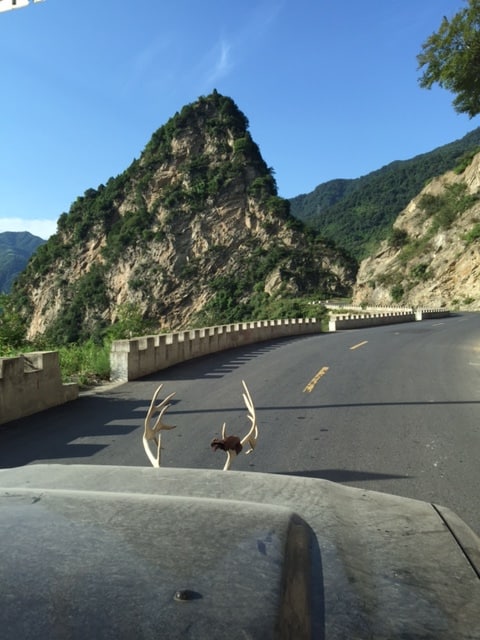 And the winner of “make your own hat using only items from the dustbin is …………….. Peens 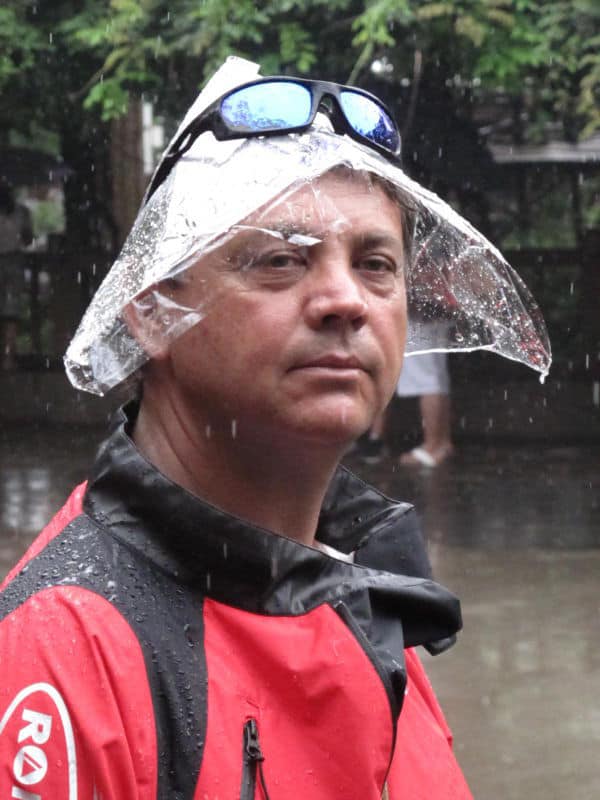 When I was mentioning how much better we were getting I should have also mentioned the wine, we found a proper wine shop in a city we rode through few days ago and for small-change managed to buy some French wines which we chill in the fridge on the back of the Bakkie, (Greg heard us call the Land Cruiser the Bakkie and I see from the name he gave one of his photos he also named it, “Bucky” from the horns and not the Afrikaans word for a Fan or Pick-up as it is called in the states.

Bringing a different friend on every trip to drive the Bakkie has added a different dimension to our group on every trip, and with each new driver comes new jokes, new stories (are my stories all getting boring and have I really told all my stories already?) Each guy brings something special with him to this trip. Greg has  added a lot of new energy on this trip and he has been a lot of fun, I think we will have to invite him back soon. He took a “short-cut through a city park the other-day to poor Tony’s shock, and when he gets into trouble with the police he somehow manages to “talk” his way out of it and somehow there is an international “bond” between police from one country and the police from another country.