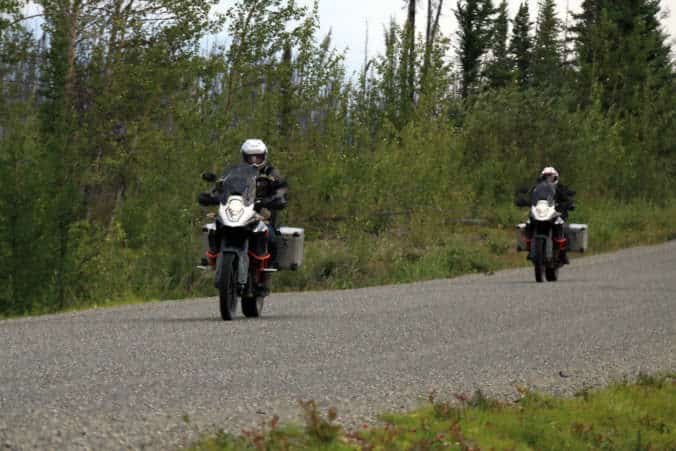 Yesterday afternoon Kaptain Rodger had a lot of energy, he showered, washed our bikes Windscreens and mirrors, then jumped on his bike and raced off to the local airfield to go and see what planes were there. Disappointed, there was only one, with “Tundra Wheels” (those big land anywhere wheels found on these bush-planes) which costs only R60 000-00 for the two.)

I feel sorry for him, he has stepped into Rockies shoes, right into this group, after over 8000km in the saddle on this leg already, a bike-train which moves like a well-oiled machine, “as smooth as a waxed bike chain” is a better Metaphor.) He is still finding himself and moves at a slower pace than us, he still does not know in which pocket he will find what, or where he packed stuff in the panniers, so he is mostly playing catch-up with the day-to-day life of the group, but on the gravel he was fast and has the reflexes of cobra, so he will find himself and fit in with the pace at what things are done in the next day or so. We have now ridden over 75 000km together since we started this Adventure in 2012, and almost know what the other will do before they do it. For example: After a fuel stop the helmets and jackets go on, all at the same time and we are ready to move, wallets back in the same pocket you took it out of, phone in its own special place, (that is the secret of travelling, everything must go back into its same place.) If you need to go to the toilet you need to make more time for yourself as not everyone wants to go to the toilet, so to make-up time you ask another to fill your bike with fuel, or you drink your coffee much faster, but when the helmets go on, so do yours. If you listen to music while you ride you start putting the earphones on before the other put on the helmet, its just how it is, we have to move as one.

Last night these two were arrested for Jay-walking.

I really am getting tired of seeing guys brought to their knew on a daily basis, this time it was Pie, his Fuel-Shut-Off-Valve started leaking overnight, we suspect a stone must have shot-up on the gravel road yesterday and damaged the valve. So we decided to go for Breakfast and leave Pie alone, the right thing to do, when a man has a problem he needs space.

And yes, to those that spotted, we were in the forecourt of a Fuel-Station 1st thing this morning as our Motel was on top of the Quick-Shop at the Fuel Station. Proper Oros Accomodation that was, cheap and nasty!!!

He closed off the Left-Hand-Side tank and we continued, stopping every 150km for fuel to fill the right-hand side tank, but we made it fine and Pie just bought some (yes I know, this is not a word you will find in the Oxford Dictionary, but it is my own word and it works for me, it means an assortment of items, but just shorter “stuffs”) from the Hardware Store and managed to fix the problem.

We spent only half the day on the Alaskan Highway, the road we rode and turned onto Highway 37, a small little road that follows the same path as the Alaskan Highway, but much more scenic and hardly any other , apart from a few RV’s and with caravans we saw a of other Adventure Bikers. The road was really very small with no lines painted on them and no shoulder, the road was also twisty and not at the same level, it kept on up and down with many deep dips and blind rises. We stayed in the forest next to rivers and lakes the entire ride, it beautiful.

We heard nothing from Peens and his “Lone Star Tour” and don’t know if and when he will re-join us, the KTM Tour Of The World. He is supporting Kaptain Rodger, but from a distance.

Rocky sent a message to say that The Keeper Of The Fish has arrived safely in Johannesburg and the fish is still frozen, so we will be inviting you all to a Fish-Braai soon.

We only passed through one town today, and we rode 501km. There were two or three very small Fuel-Stations at the entrance to RV Parks, and when I saw the sign saying “Jade City 10km” I got excited. Then we discovered that it was actually a Jade Mine with a shop to buy Jade (a type of semi-precious-stone,) and then cutting the huge rocks into slices and then smaller and then it is carved into everything from Crosses to Bears, Jewellery and wind-chimes, little trees and other stuffs (see how lekker the word works,) for a selection of uses and decoration.

During the day I did find Pie with all his earthly belongings packed-out on the side of the road, his pannier brackets had broken on the one side of the bike and he had to find straps and do a temporary repair until they can be welded. I did not even take a photo as that is exactly what Murphy wants me to do, so I and we can have a trouble-free run down to Seattle, only another 3000km away, (actually its only 2000km but as we are not going the Fastest Route but doing to longer Zig-Zag Route.

Tomorrow we head for Smithers, a big town,has 10 000 people living there.

We are now near Liard Springs, a Hot Water Spring we passed on our way up, on the Alaskan Highway. A few days before we passed by the Springs an Australian couple were found murdered next to the side of the road in their Camper Van, it was a big story as crime is non-existing, especially a crime of murder. In the media, we have followed the story and it has been the big discussion every time we spoke to people that travelled past the Hot Springs. The police are looking for two Canadian kids, 18 and 19 years old, and they keep on ditching cars and stealing new ones, last we heard they were spotted near Manitoba but got away, now the police think they are near Ontario. Today when we checked into our Motel, I hear the receptionist warn two other female travellers not to go outside alone, and how scared they all are and how they staff of the motel “live in fear” of these two kids, it’s almost like a movie. I had many thoughts about this double murder and the reaction of the people, and then I think of the murder rate in South Africa and realise how blunted we have become to things, murder is an everyday occurrence back home, here two people murdered has shocked the community and all the travellers and local tourists.