Last night some of Rockies friends who emigrated to Canada joined us for our last dinner of Leg 13, and as it was  a Public Holiday in South Africa, Heritage Day, (which is celebrated by all the Indigenous African people back home wearing traditional dress and eating traditional food and dancing traditional dances and singing traditional songs,) we did the one thing all “tribes” in South Africa love and have in common, Shieza Nama (Braai Vleis) or just in plain English BBQ, so as we could not make a fire in the hotel parking ground we did the next best thing, we went to a Steakhouse called Chop.

We had a great night with great food and we celebrated another successful trip, I was also just very thankful I made it to the Hotel alive as the traffic through Toronto was hectic, there were 4 Express lanes on the highway, then a concrete barrier and then another three lanes called “collector Lanes” which are sort of the lanes you use to get onto and off the highway, but the 7 lanes merge every few kilometers once everyone has had time to speed-up or slow down in the collector lanes, so the 4 express lanes keep moving fast, and then there are also 7 lanes on the other side of the highway, and all 14 lanes were packed with cars when we rode through rush-our. There are 8 Million people who stay in the Toronto area and I think I saw most of them yesterday on that highway during the hour it took us to get through Toronto. Luckily there were no Toll Booths and the toll was collected electronically, and this was good news as previous Toll Booth Operators has been driven close to tears on this trip previously when the first to race up to the booth is always Peens, (who treats everything in life like a Paragliding Championship with the motto “he arrives 1st wins”) and Peens has the worst accent, so the operator is confused by hearing words which are almost recognizable, but then they switch to hand signals and after waving of hands from both the operator understands Peens want to pay for 7 bikes and the operator indicated the amount payable which brings us to the next problem as Peens never has money on him, so then there is more communication towards us behind him and eventually the money is passed forward and in most cases dropped on-route, and then the 3rd problem comes when the operator indicates one bike to go over the metallic strip and then Peens rides through just as one of us from the back is waved through, the operator then screams and before you know it the extra bike that  crossed stops and reverses back over the strip which had no counted three bikes and in fact only one bike is now on the other side, the operator then wants to charge for the mistake and by the time this is being signalled to us we have all raced over leaving the poor person close to tears.

Here is the team with Sarah, Bruce and Dario with us. 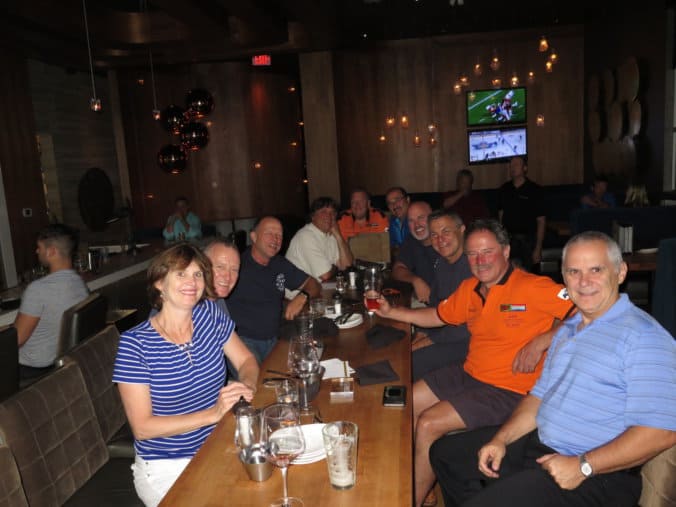 This morning we set off towards the Niagara Falls. These falls are not situated in the middle of the bush and in nature as with the Victoria Falls we are familiar with in Zambia and the Banana Republic of Zim, but these fall are in between two big cities with tall buildings on both side of the falls. There are two separate sections of the falls, but the sun was rising right over the falls, so not very good light for capturing the falls at 8h00 in the morning, but here are some photos of the falls. 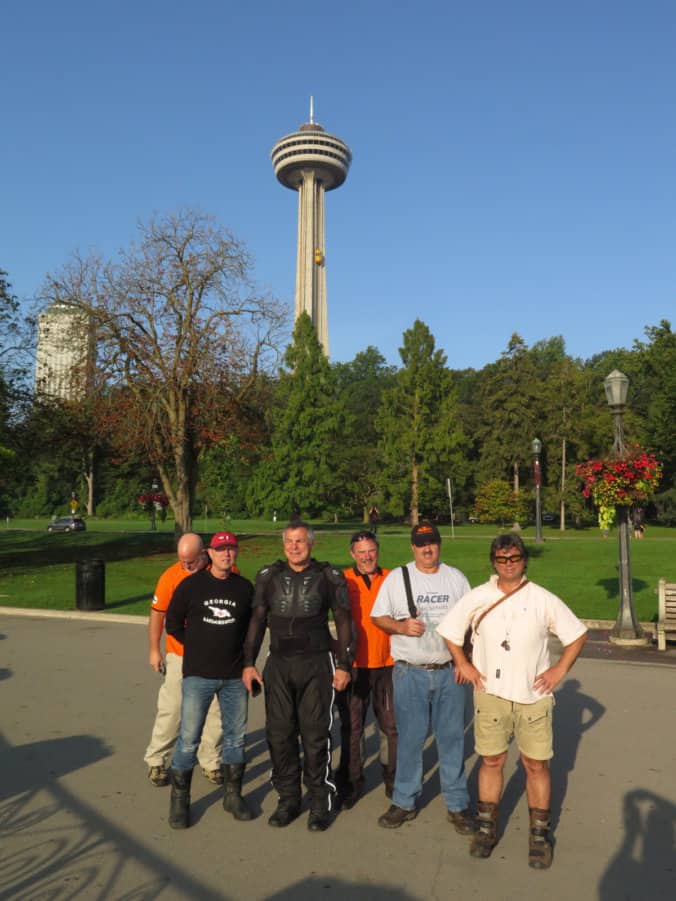 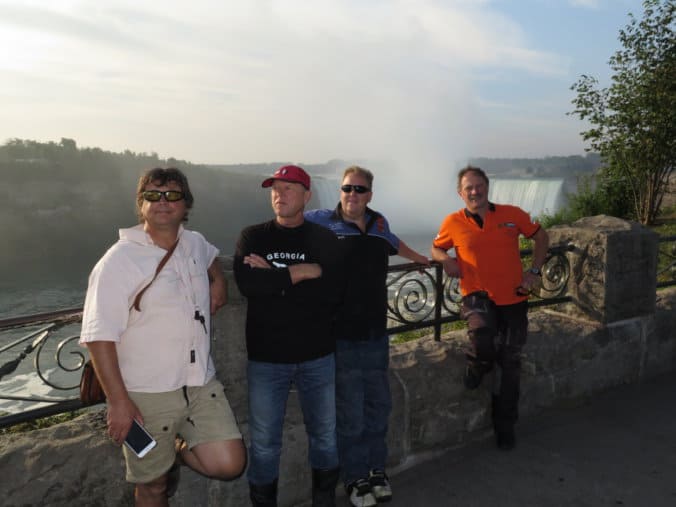 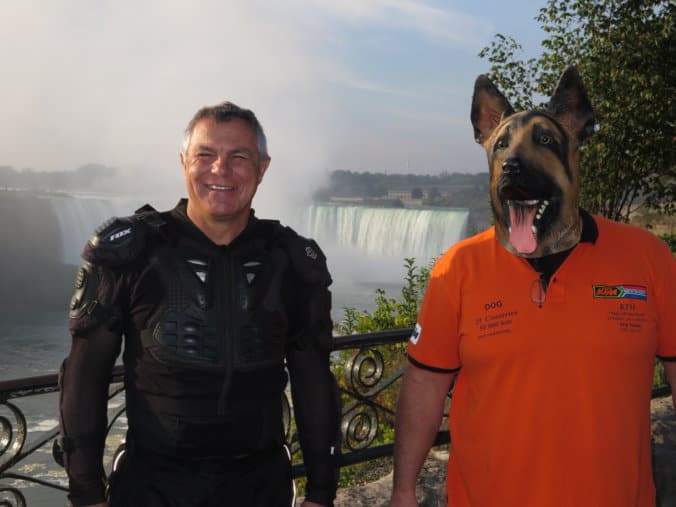 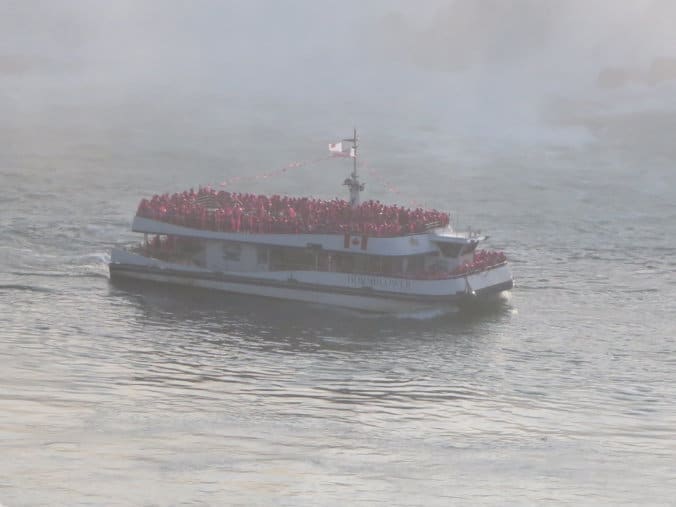 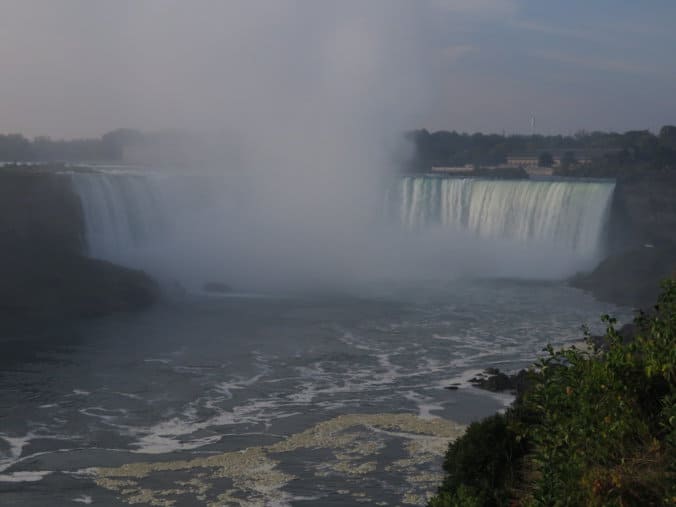 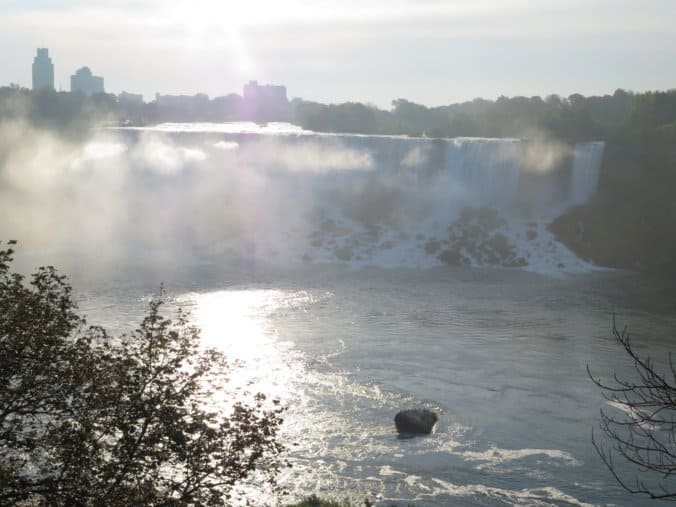 Then we set off to find the KTM Workshop we found on line, it was situated in a small town or village of Elma, about 30 km outside Buffalo. It was a small shop and little showroom compared to the previous place we used, but we met one of the partners who was in the workshop with one other guy, the shop had a Closed on Sunday and Tuesday Sign on the door, but we entered from the workshop-side and spoke to Jeff who gave us the good news that he could service the bikes and store them in his heated storage next to the workshop (it has to be heated as it gets to -30 in the Winter if the wind starts blowing.

We all compiled a list of the jobs each bike needed and then went to have Buffalo Wings in Buffalo, the best I ever had, washed down with a few Samuel Adams Oktoberfest beers, also the best beer I ever had. 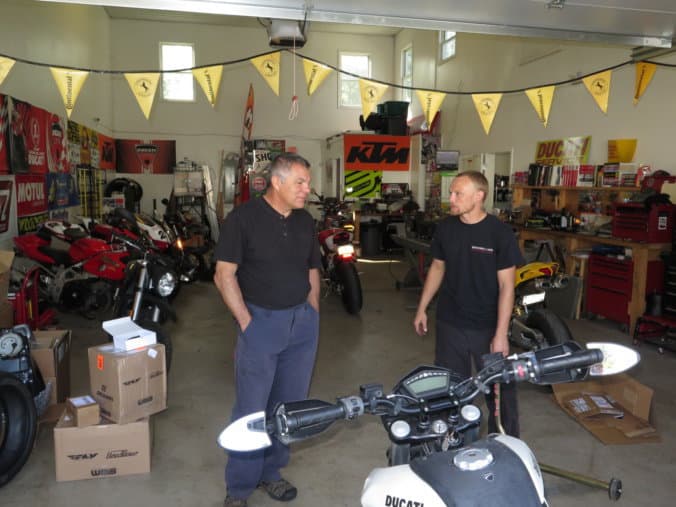 Note one of the Snow Mobile currently being stored for one of their customers until Winter. Not all the people store their snow mobiles, I saw one guy that had parked his on the roof of his Carport, or garage, no doubt riding it up there at the end of winter and I am sure that after the first proper snow storm he simply takes his snow-plough and then not just plough his driveway but also plough a section of his street until he has enough snow next to his Carport to ride it down again. 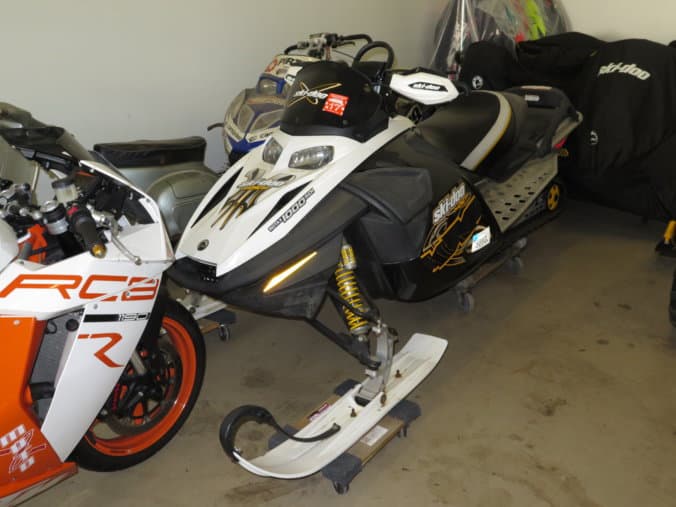 It has a rubber track at the back which grips the snow to pull it forward: 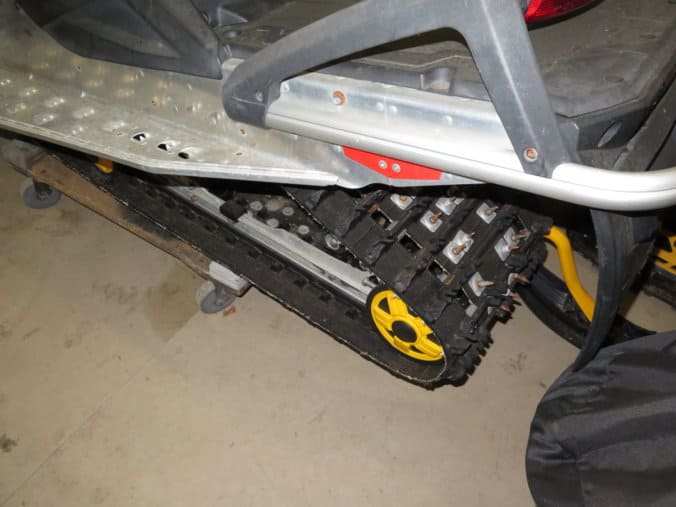 So then it was time to pack-up and re-pack : 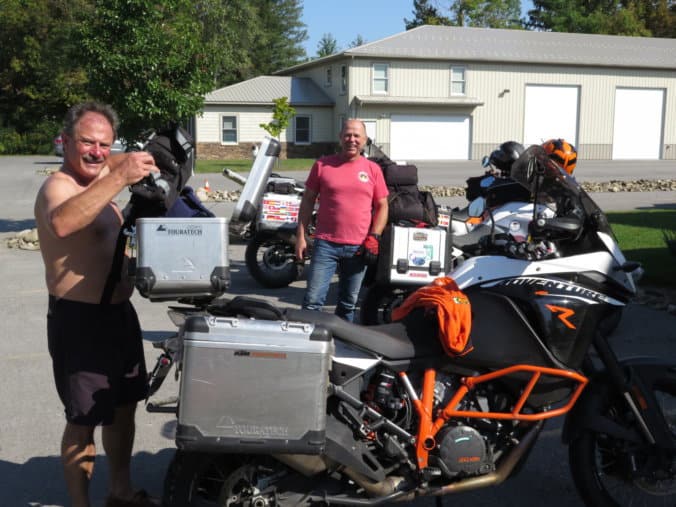 This hot weather currently being experienced here is the hottest since 1959, trust us to once again cause chaos wherever we go, now even with the weather.

One of the things that caught my eye was how well the tax-payers money is spent in Canada (and in the USA as well.) Look, the tax rate is high, 50%, but after paying it you get free medical and schooling and university education for your kids, and I mean proper medical and proper schooling, you also don’t have to have medical aid, private security, or even Armed Response like we have become accustomed to. And the good news is that there is enough money left for the local government to spend on putting flowers on all the lamp posts in all the little towns, and the gardens next to the road are kept pretty for the summer. 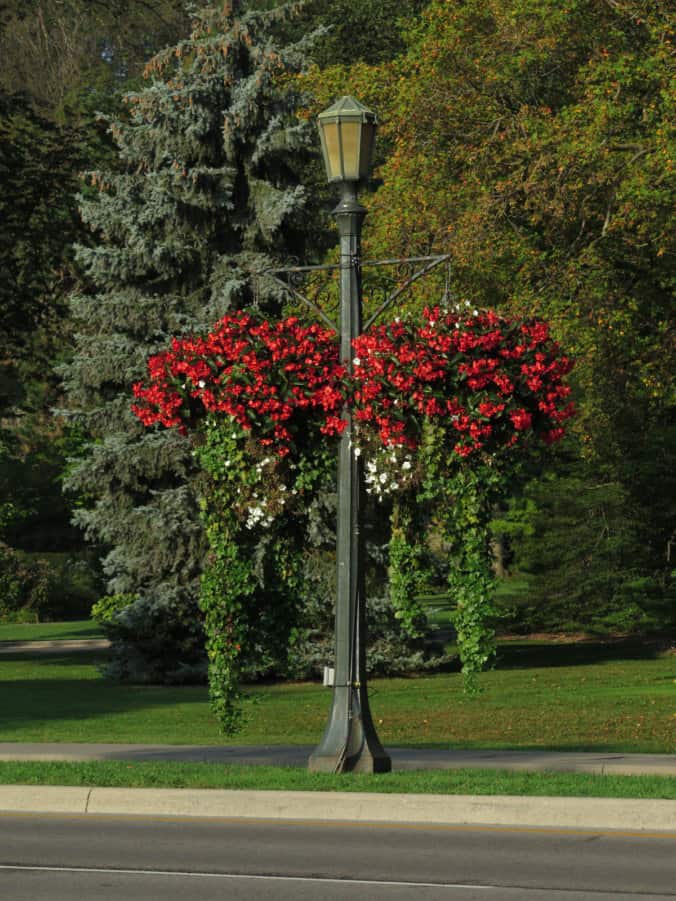 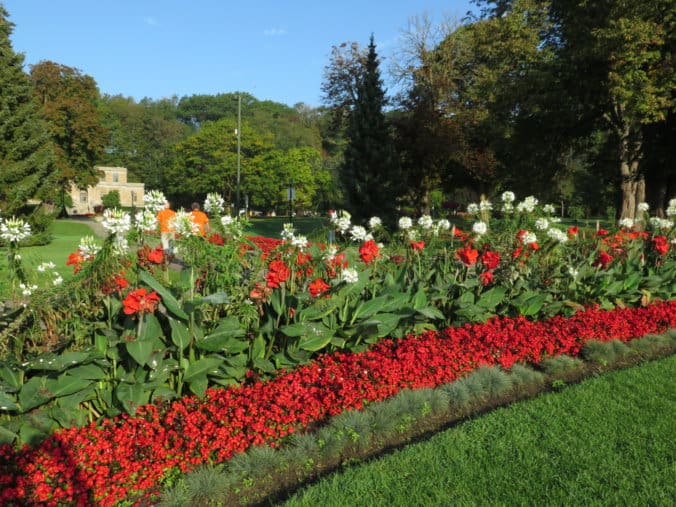 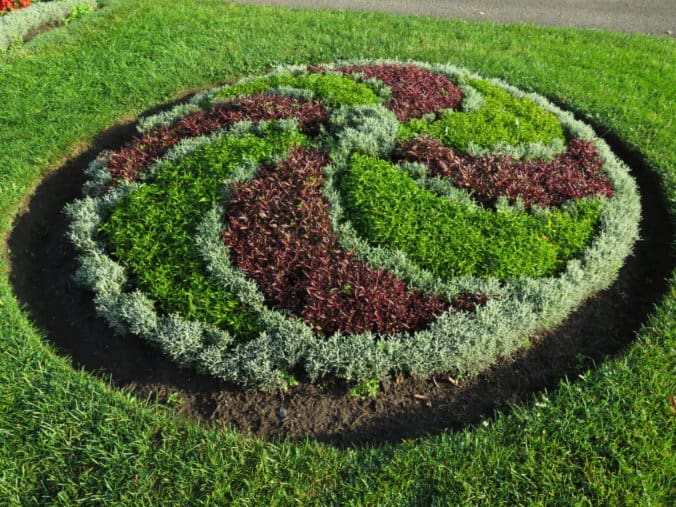 But what is very impressive is that apart from almost not having crime (due to a police force that do a proper job) the people also don’t litter, there is not a paper or a bottle anywhere, and the fine if you do litter is R100 000-00, and don’t think you can litter when there is no policeman to see you as the neighbor or person driving behind you will report you and you will get in trouble.

Thanks for riding with us, we plan to return in July next year and I hope you will hop on and ride with.