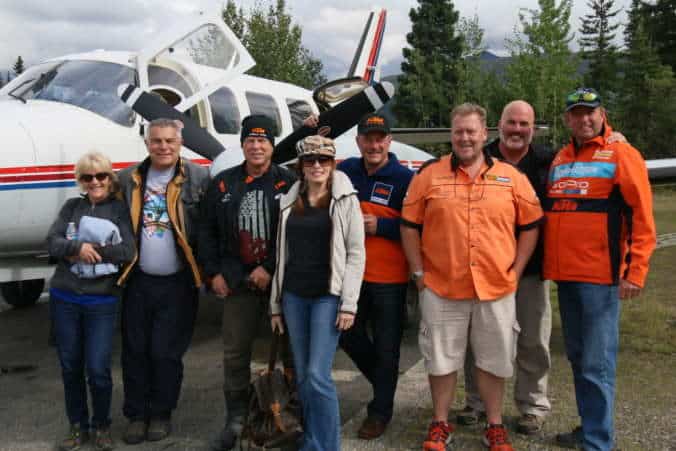 Yesterday the two “Bikers For Luv” Couples and their dog went to drop-off some presents in Santas’s back-yard and then went to meet the old man:

Here are some photos I have not posted yet but of which I have written in the Blog:

Sitting here scratching the 40 Mozzi Bites per leg, I remember how pleased I was at the Car-wash yesterday when I sprayed-off Hundreds of red-dots off my screen, each little red-dot resembeling a Mozzi that I killed, LEKKER !!!!

We had Dinner last night in the restaurant at Chena Springs.

After Dinner, with the sun still shining at 22h30, I went to the Hot-Spring for my 2nd swim of the day. Because the temperature had dropped (it was raining) there was a lot of mist hanging over the Hot-Lake and it was more like a scene of “Gorillas In The Mist” especially when you look at the swimming costumes the people were wearing. In their defence, swimming is not big in the life of an Alaskan, as their season is short and there are no warm water seas even close to them. But it was not the strange clothing that cut my swim short, it was because everybody looked at me and felt sorry for me as I could not afford any Tattoos, I was the odd-one-out, they all had plenty of ink on their bodies, and I really mean PLENTY, so I to cut my swim short also went to bed.

We left late again, only at 8h00 and the entire way we were looking for a place to stop for Breakfast, but all the little spots on the way to Fairbanks were closed. We did not want to stop in Fairbanks and thought we would get a place on route. WRONG!!! I forgot how isolated one is and that there are no cross-roads between towns, not even onthe road linking the only two big towns, with the biggest National Park in the middle. We eventually found a small little town and turned into it off the main road, what a luck. We stumbled onto this little restaurant, a small brewery, which served breakfast, and accross the road there was the Preacher welcoming all 6 car’s worth of his congregation. Die Kerk en die Bar is Langs mekaar.

After a great Breakfast we decided to ride through the little village, to go and look at the river’s edge at the tripod they use for the local Gambling equipment, on the way we passed little gardens in their front gardens:

We also passed many Inuit People waiting outside the Liqour Store for it to open. Then we got to the rivers edge where we found the communities Gaming equipment:

Rocy then spotted a Farmers Market and called us back:

The scenary became better along the way, the little trees (little as they grow in permafrost,) gave way to big trees, and then we got to some hills and then to some mountains and then rivers.

Then we got to Denali National Park. Its claim to fame is that it is a very big park around the highest mountain in North America, now called Denali, but until recently it was called Mount McKinley, named after the explorer that “discovered” it. I think it was Mr. Obama that decided that it was rather the local Inuit People that discovered it 1st. so the name was changed to the local name for the mountain.

Denali is one of the famous “7 Summits” which refers to the 7 highest mountains in the world you have to climb to become recognised as a proper 201st Century Mountain Climber. Unlike Everest which is thre highest at almost 9000m, this mountain is around 8000m.

There are many animals in the park all around the mountain, and one can only get close to the mountain when you take a bus-tour, no private vehicles may drive deep into the park, because we are complete idiots and have to be driven their in a bus by Pappagaai’s uncle.

But today the mountain was covered in clouds, and the shortest bus-ride into the park (just to see Bears, Moose, Caribu etc. again) was a bus ride. So, we decided to Go-Big, we negotiated, (just like South Africans can) to go for a the many Glaciers and around Mountain Denali.

Here are some photos I took today from the King Air Plane.

My Zoom is really Long

This is a tourist trap, with a board-walk selling Kakkies, (shitty-things tourist buys: fridge magnets, branded hats, shirts, anything you can think of branded with a photo of the mountain or name etc.) for Tourists. And between these shops on the boardwalk are coffee shops, Galleries for buying “Art” jewellery shops and shops selling you an adventure (white-water-rafting, cycle-tours, Zip-Line-tours, Kayak-tours, etc. etc.)

Tomorrow we continue heading South towards the Anchorage area, where we hope to meet-up with Peens to taste a Salmon he has hopefully have caught.