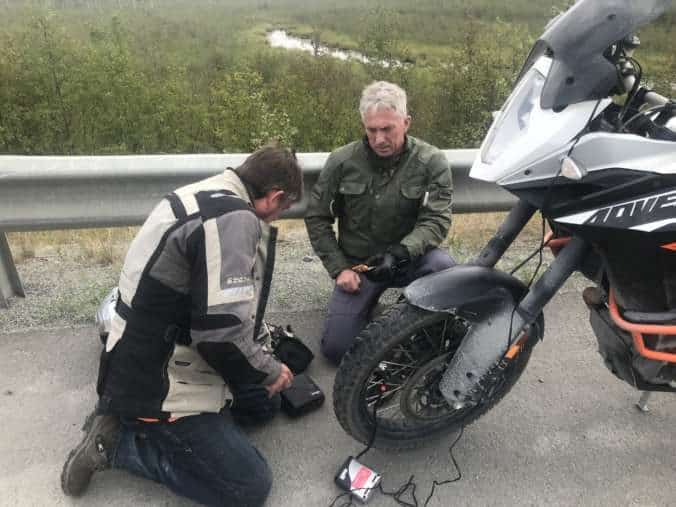 This Blog will have to be short as the wi-fi at the cabins we are staying in has no proper wi-fi. Using the words “we are staying in” is probably also wrong as the only guy at the cabins is me, the other three, , Peens and poor new-guy-Rodger, are still 200km away, stuck next to the road, with a big puncture in the front wheels side-wall. The spare tubes and tyre-levers are with the split-group, one day’s ride ahead of us, already drinking a beer in Dawson City. So not sure what will happen now.

But let me tell you about our day :

We collected our fish this morning, (23 Pounds of filleted Salmon,) it was vacuum-packed and frozen overnight, and we bought a Styrofoam Cooler box, then called Delivery to load our fish:

Then we rode into Anchorage, passing the place where the local residents go to catch their salmon going up the river :

We then got to the hotel where we found Roger, but we then learnt that Murphy had switched sides, he was no longer with the other guys but amongst us. First we discovered that there was a mix-up with the booking for the hotel for Roger and that he arrived at the hotel at 4h00 without his room reserved and paid for. Rocky and Roger re-packed and did a little hand-over and then we set off on the remaining 512km.

The 1st 50km went well and Rodger looked happy and alert in spite of his Jet-Lag and 4 hours sleep. As we took the off-ramp from the highway, a long 90 degree bend, I suddenly saw Roger swerve into the emergency lane which was covered in loose gravel and just saw dust as he put his boots down to steady himself. The front wheel was flat. Milsy and I had a pump and a puncture repair kit and soon the puncture was plugged, but it was in a bad-spot, on the side in the side-wall. We continued another 250km, the road was really beautiful, it took us past another glacier.

and stopped to re-fuel and eat some soup. The pressure had dropped slightly and we decided to plug it again instead of pumping it, BIG MISTAKE!!!!!!

After putting in a new plug we pumped the tyre and set off, Happy Days Were Here Again…….Not. I saw Rodger do the Boot-dance into the emergency lane and this time the tyre almost came off the rim, the new plug had shot-out at 100km per hour. We battled to get the tyre to pop-into the rim after plugging it and after several attempts we got luck and it seated into the rim and filled with air, we plugged it with two plugs this time, but the  tyre-weld looked slimy to me instead of sticky, and we suspected that this was lubricating the plug and when the side-wall flexes the pressure pops it out:

Roger set off again, but much slower, it all went well for 4km and then he danced again, this time very almost losing control, and the tyre was almost off the rim again. Peens who was far ahead of us had now discovered we were missing and turned around to save us. He had stickier plugs and plugged the hole again. But with the little compressor, we could not get the tyre to pop into place. Not a problem, we all have seen the YouTube videos, you simply put some Lighter Flued\gas into the tyre and then strike a match and it then explodes and the tyre pops into place, but for this, to work, you need a smoker with a lighter, none of us smoke. So Peens had the idea to pour Brandy inside the tyre and light it, which only slow-cooked the tyre. So then we tried the very flammable Bear-spray, which did roast the tyre a little but it did not pop-into position as hoped.

Milsy turned around and rode to the little village we had just passed, hoping to find any type of tube that might work. It was decided that I continue to Tok to sort out to accommodation (actually just get the keys as the other guys booked cabins for us before they left in the morning.) But I went and bough some beer and food, but there was no food as the only restaurant in Tok was closed. So if the guys make it in tonight they are eating Jerky and Crisps.

The spare tubes are with the other guys, across the border, across the Yukon River, only passable by ferry. And apparently it is a dirt road and it is very bad, so not many motorists on it which can bring us the tubes. So taking the wheel-off and taking it back to Anchorage might be the only solution….

Good news, the guys have just rolled in, its just before midnight, they are finished, but the tyre has been plugged and so far it is holding, but now we have to make a call, do we turn around and take an easier route to White Horse or do we continue following the planned route and let the other guys leave the spare tube for us in Dawson City.

We will have to consider the options and make a call.