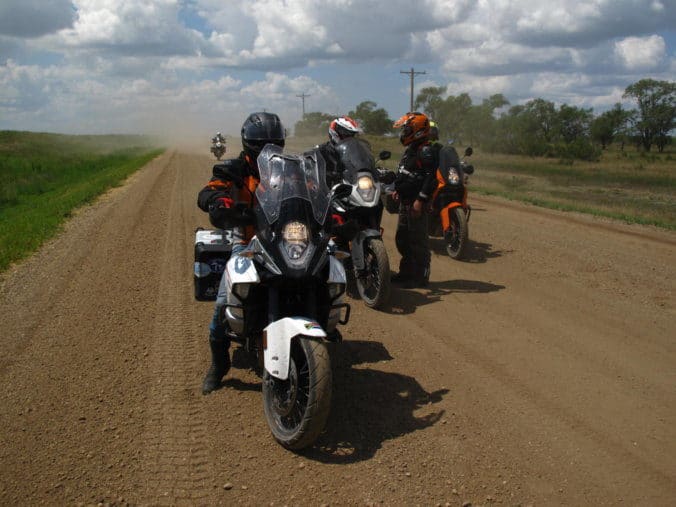 Last night we decided to push hard today to get close to the Sturgis Area, this town is famous for hosting the biggest Motorbike Rally in the world, and we are going to be one week too soon to be able to attend, but I am relieved as it attracts so many visitors that all the accommodation in the surrounding towns are booked-up a year in advance. The 1st event was held in Sturgis in 1938, a group of Indian Motorcycles used this Town to stage some Stunt Riding and Racing and the tradition was started. In 2015 700 000 people attended and this annual 10 day event generates about $800 000 000-00 in revenue. Hundreds of There is a lot of riding  up and down the streets, but also around in the area, there are bike-shows, music festivals and ususlly a lot of drunk bikers and non stop parties. But the town is popular among the biker community all year -round  as it is situated in an area with the best roads (so they say) for biking. Our plan is to stay in the area and use that as a Base from where we can do some riding and visit some famous sites in the area.

The route planning split the group into two as the options was basically to either jump onto the main highway, the Interstate and see the corn-fields in a distance or choose the 14 West, a small road, and see the corn right up close. Peens discovered a small scenic road along the Misouri river and we all agreed to ride that section and then meet in Pierre, the capital of South Dakota, the State we are now in.

It was breakfast at 6h30 and “Pegs-up” by 7h00. The two Texans and Pie and Milsy headed of to the Interstate and the rest of us jumped onto the 14 West, and continued West the whole day.

I have never imagined that there can be so many Corn and Soy farming in one area, it is non-stop fields as far as the eye can see. But they also farm with Wind in this area, and even that was “Off-The-Scale” 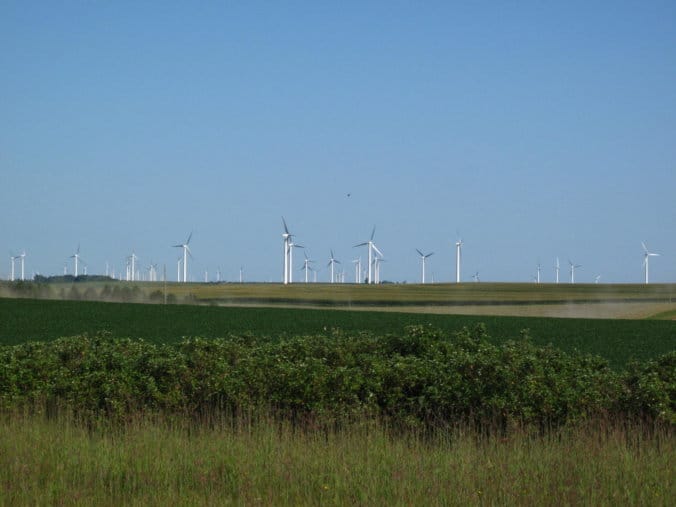 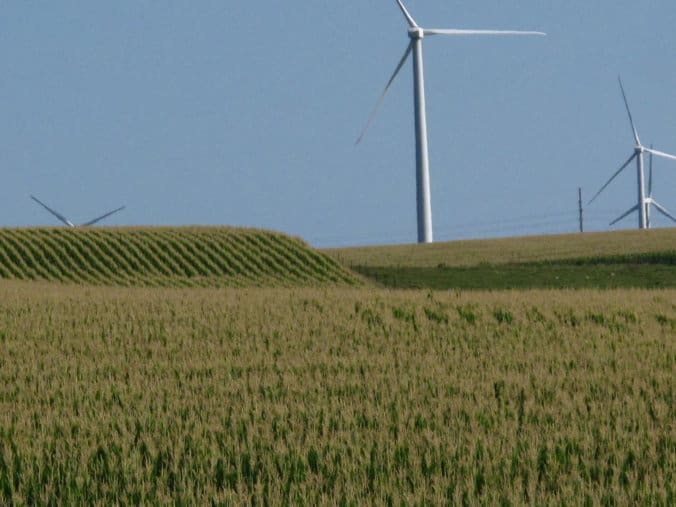 Notice how close together the rows of corn is, it is a small yellow Corn that is grown here, not like the big White Mielie we have, its Sweet-Corn. And a lot of Soya as well. The farm impliments are much bigger than I have ever seen and in one little town there were 5 different manufacturers all next to one another, John Deer, and New Holland seems to be the most common used. 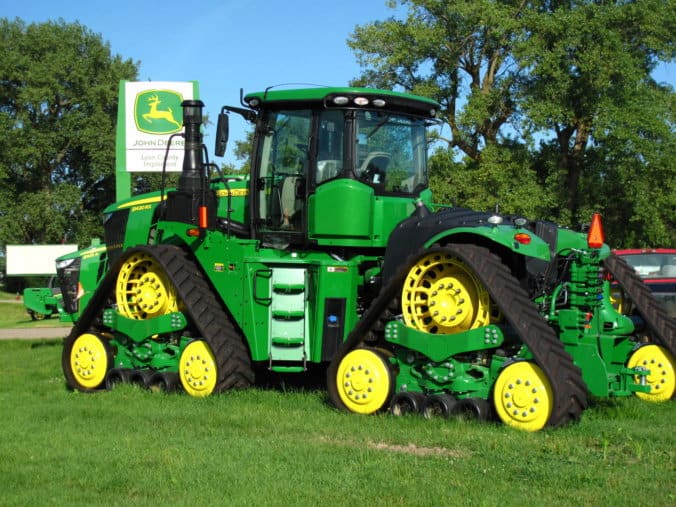 See below, the plaugh flips down on the sides giving you about 90 rows being ploughed behind the tractor at the same time. 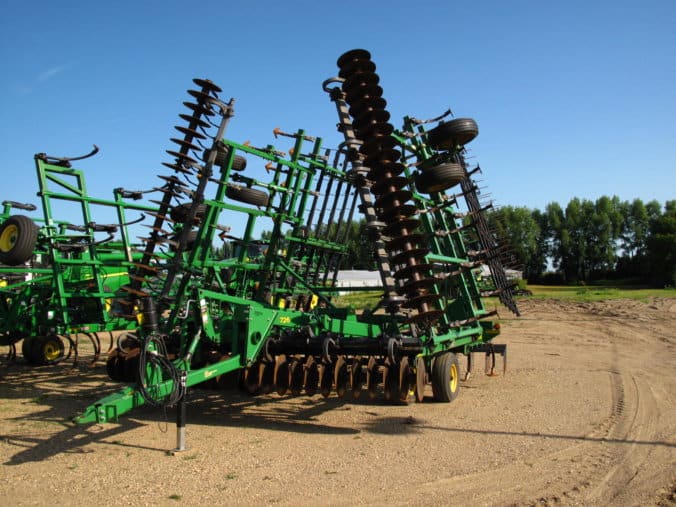 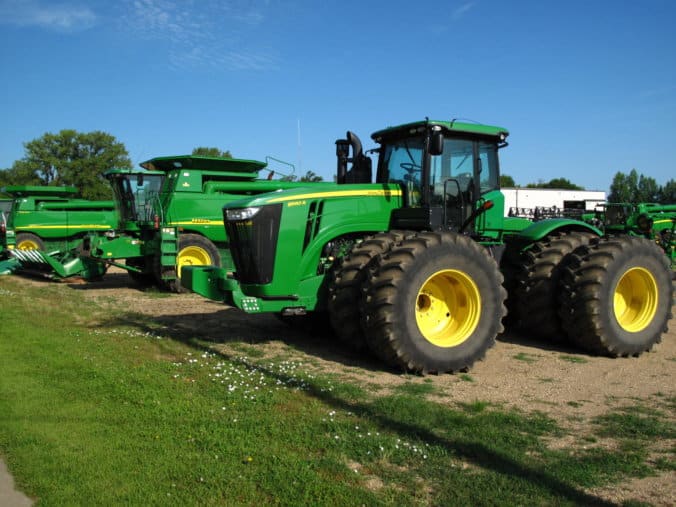 At a stage old Suzzy did not agree with Peens’s GPS (with the detailed Africa Maps and an over-view of the USA Maps) and to avoid hurting her feelings I felt obliged to follow her, specially when she had chosen a Fast-Gravel road for me. 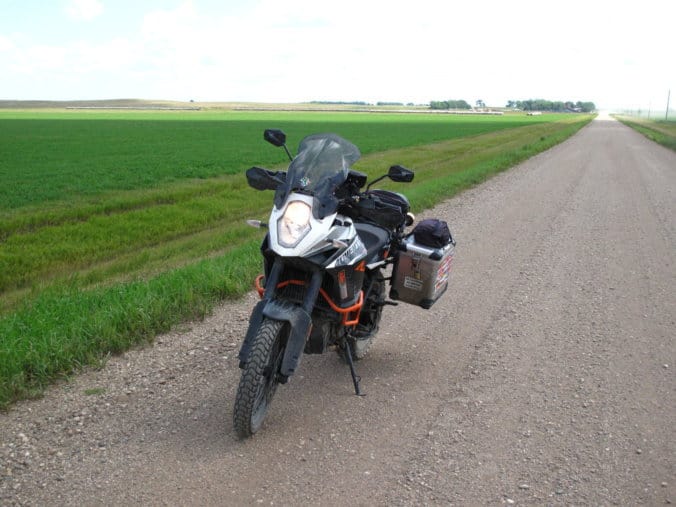 But I soon wished I did not as I was able to change the Power Settings from Sport to Off-Road but I wrongly thought that it would automatically change the ABS Settings as well, but it did not and I  was not 100% comfortable with the braking, I seem to remember I was able to adjust the ABS but it was so long ago that I could not find a way to adjust it, (later learnt that the Menu to do this is not available when moving and one has to be parked to do this.

Later I ran-into the 1,5 Pilots and as we were crossing over the Big Bend Dam Wall we met-up with the other 4 guys. So we bought some bread and cheese and Pink Polony (Posessed Meat, not Processed Meat,) and Mayo and some Bud Light and Coke and went off in search of a romantic spot to sit and eat lunch, under a tree, next to the water, with local entertainment, and we found such a place. It was in an Indian Reserve and we first had to pass the Local Indian’s Casino, (all Indian Reserves has a right to have a Casino and the money the Casino makes is then distributed amongs them and some infastructure is built with the money generated, but after seeing and speaking to some people today up-close and seeing the community and area where they live and the state of their cars (all of them had been in accidents and has not been repaired,) I am not sure that this system is working as it was intended to work.

But we did find a spot next to the River to eat and swim, and we needed the swim as we were dusty after a short gravel section. 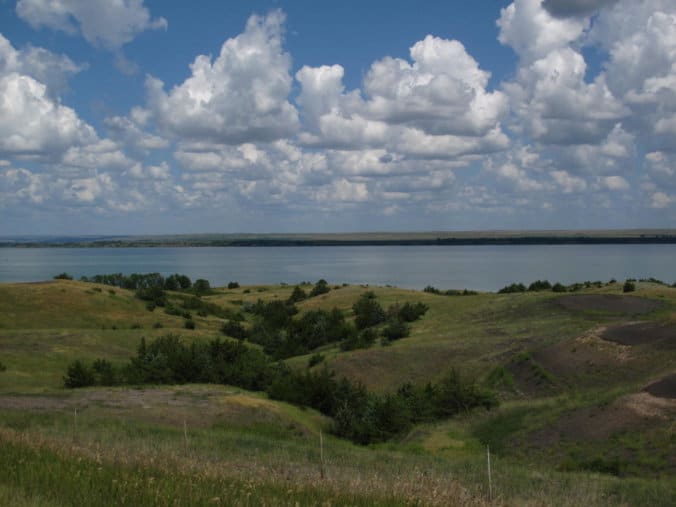 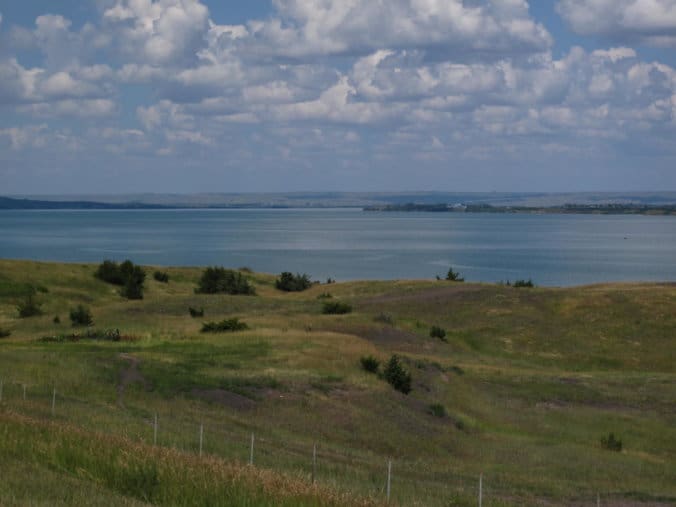 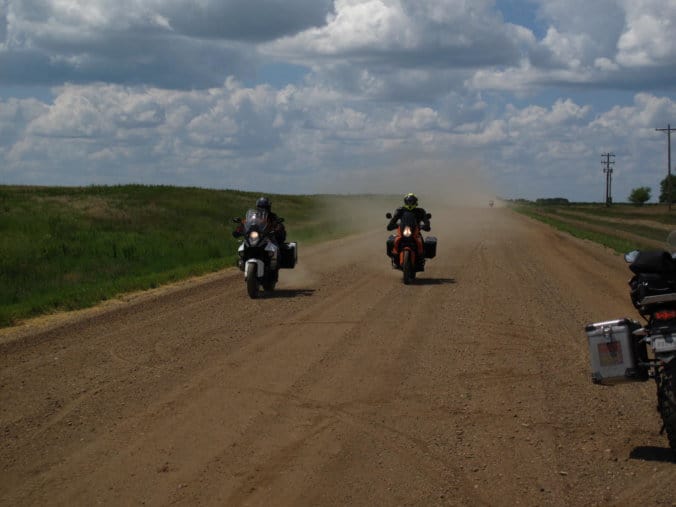 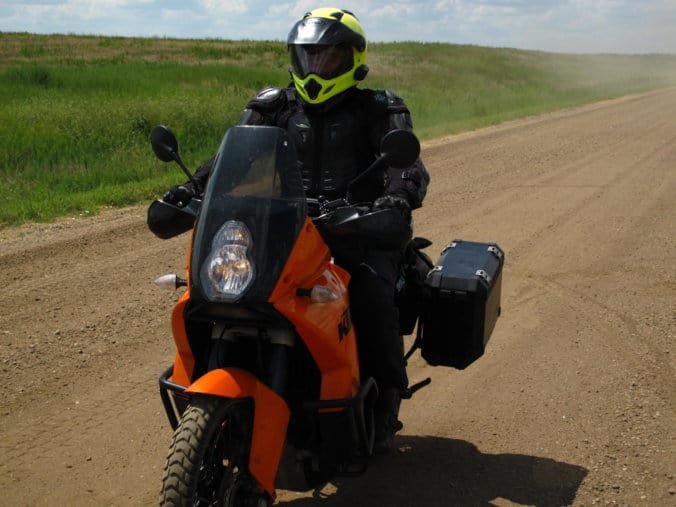 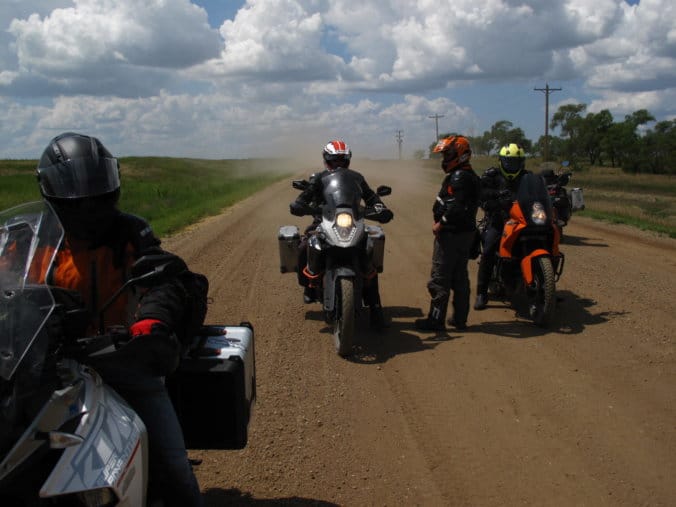 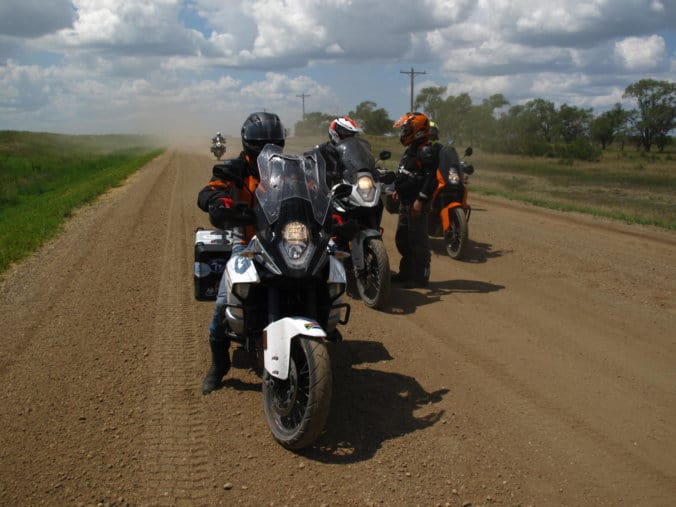 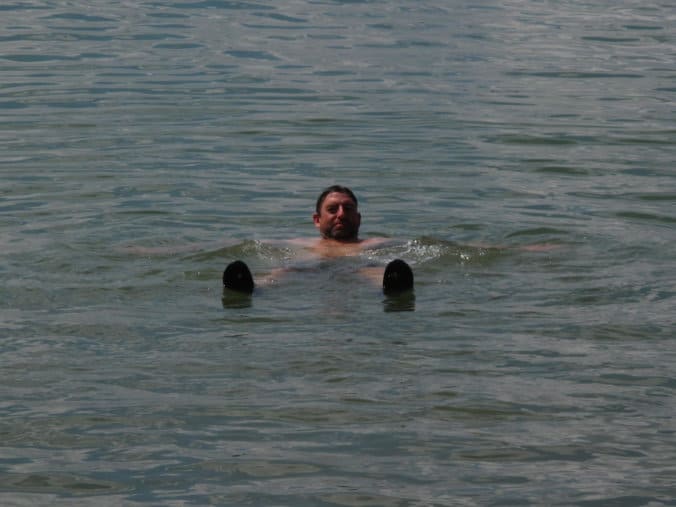 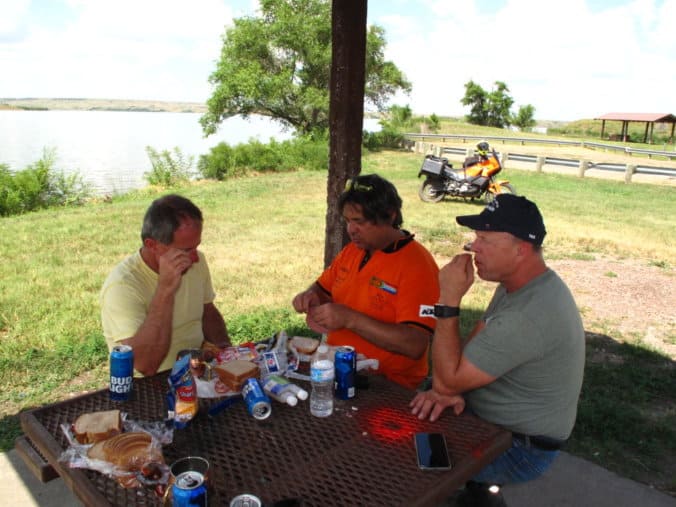 Then we found a Buffalo and Milsy challanged him up close, I prevered to use the Zoom on my camera. 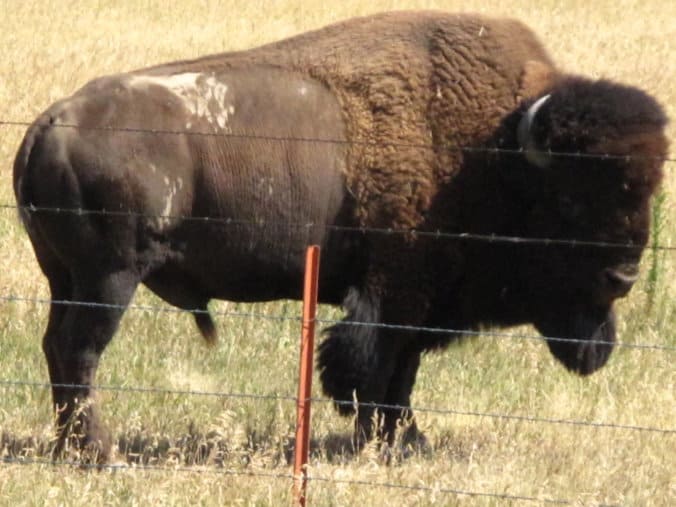 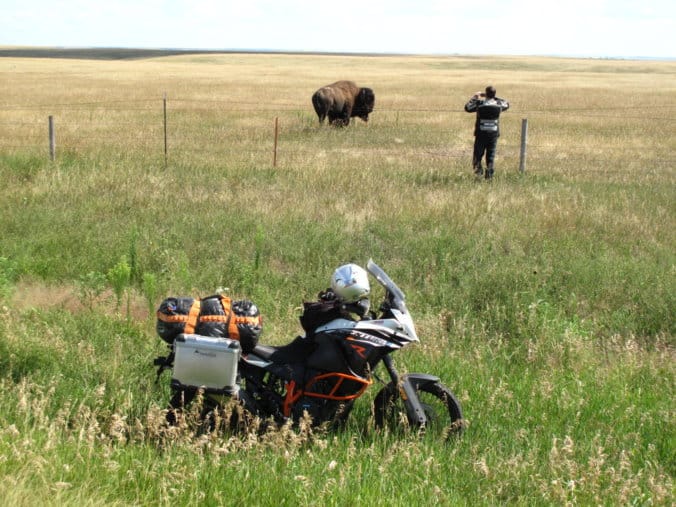