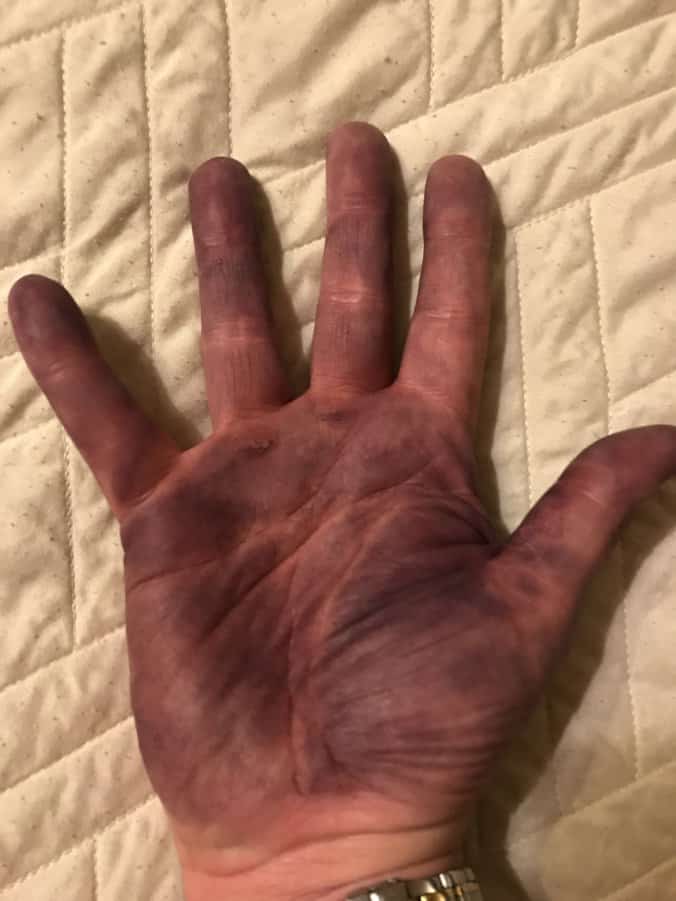 I should have paid extra for proper gloves !! Today we had a wet day and I doubt my gloves are going to be black once they dry as half of the dye are on my hands.

Pie left us this morning and the 6 of us headed North the the center of Boston to see the U.S.S. Constitution, a famous war ship Dog told me. I was not in the mood to see an old warship of 1797 and even less excited about the rush-hour traffic awaiting us, but the decision was made and off we went, we had about 100km to go. About 35km before the warship the highway got to a stand-still, like a parking lot, but Dog’s technology to the rescue, his GPS Betty took us off the highway and on a Zig-Zag course through suburbia, and I don’t mean the main roads through the suburbs, I mean the small little streets past the houses, past the schools, past the parks and occasionally having to get back on the highway just to pass a lake or river before re-routing us past the yard-sales and the kids at the bus-stops, the mothers in their gowns and the dog-walkers.I enjoyed this as our friends for our Supper Club back home stayed near Boston for 2 years before returning to South Africa and I wondered if we did not pass their house along the way.

When we got close to the Docks we had to fall in line with the traffic, and when we came around the corner and could see the sign of the U.S.S. Constitution Museum but not any sign directing us to a parking area or entrance the 4 South Africans jumped the pavement and followed the Bicycle Lane into the Yard, heading to the front door of the Museum. But then things got ugly, I saw the Armed Security turn around and he started screaming into his Wally-Talky, and I don’t mean like the Wally-Tally’s back home (a name given by the Rural locals in South Africa for chicken Take-away which is served with the beak and legs,) but calling for back-up. He pointed for me to pull over and came marching to me asking how we entered as the only entrance to the Restricted  Naval Yard was past him. I told he we followed the Bike Lane through the bollards on the opposite side of the Yard. He almost soiled his pants, “it is a Bicycle Lane!!!!!” he shouted, to which Rocky replied that in South Africa the Bicycle Lane showed a drawing of a bicycle on the lane with peddles and that this lane had a picture of a Motorbike as it had no Pedals.  Again he almost wet his pants and we were told to wait………….but only for a minute as two cars with lights and guys with guns arrived. We explained to them our slight miss interpretation of the Bike-Lane and the absence of pedals on the drawing, but it did not go down well. Luckily he spoke to Peens and he heard from Peens’s strange Boer-accent that we were foreigners, and he started understanding our honest misinterpretation of the Bike-Lane. But we had to give him our driving licenses which he radioed in to Control Room to check-out, when these came back OK the bikes registration numbers were radioed inn  and only when these came back OK did the mood lighten. Then he asked where we were from and how far we had traveled and we became friends, so then he presented me with some Medallion from the Cops and I gave him the present I had taken with me to give my Second Cousin Mandi, (which I of course forgot to give to her,) a small Rhino made out of wire and beads (a form of African art, any animal is made from wire and bead-work, some live size, so it is not strange to visit your friend and find 3  life size sheep grazing on the lawn.)

Then we went through the Museum and then onto the boat. The USS Constitution’s Nick-Name is “Old Iron Sides” and it turned out to be a very interesting tour. 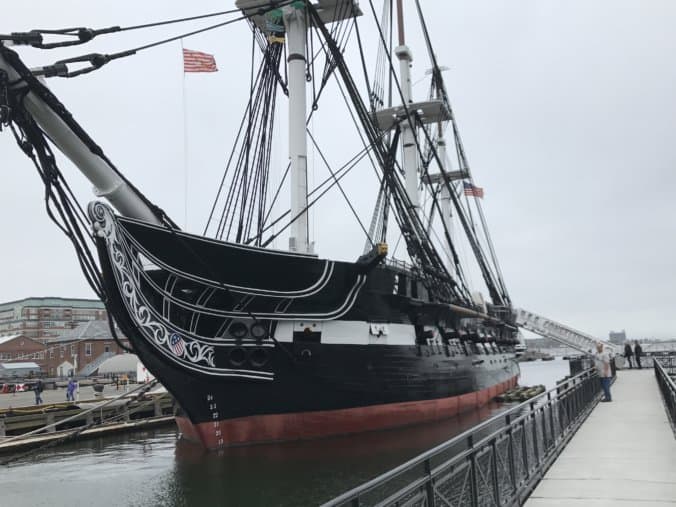 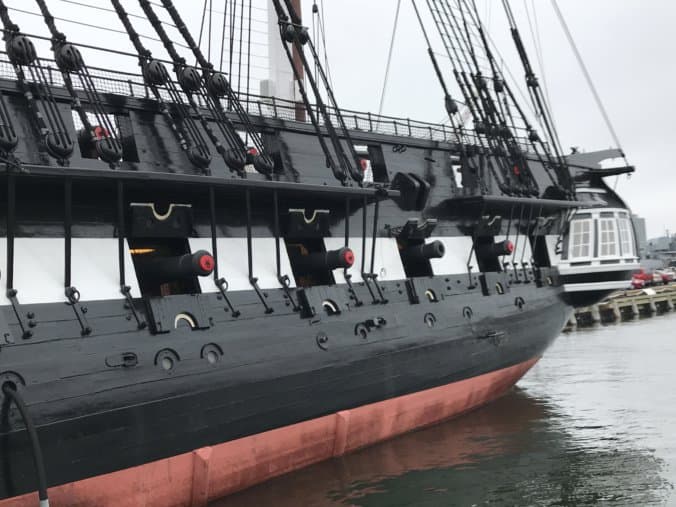 There are 13 cannons on each side. This ship was commissioned and built and started serving in 1797. It was after the war of independence when America kicked the British colonizers out, but the British still though they were superior on the seas and that their navy was still the best in the world, (you will remember I wrote how the Dutch were beaten without a fight when the British ships sailed into New Amsterdam (New York.) Well the reason this ship is so famous is for two reasons, is is seen as the ship which changed the way the British saw their Navy as they started suffering huge losses by the American fleet and were no longer number 1 on the seas. See below :

Here are some photos and some info I did not know about these type of war-ships : 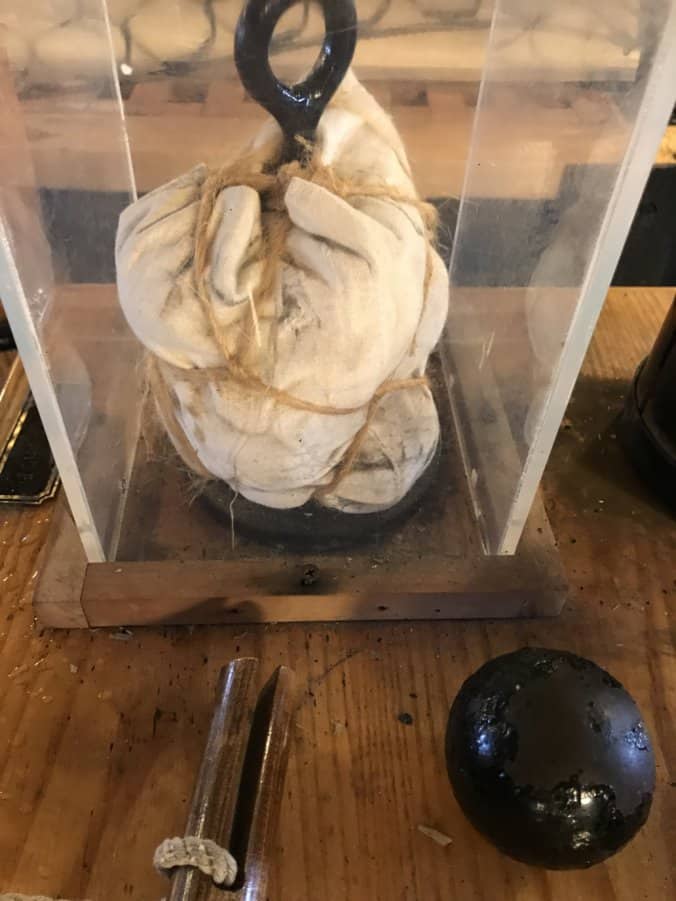 They did not just shoot Cannonballs, they had a variety of projectiles they shoved down the cannon. Above is a type of “Shot-Gun” projectile, a whole lot of smaller balls were covered in cloth and then fired towards the deck.

Look at these other projectiles : 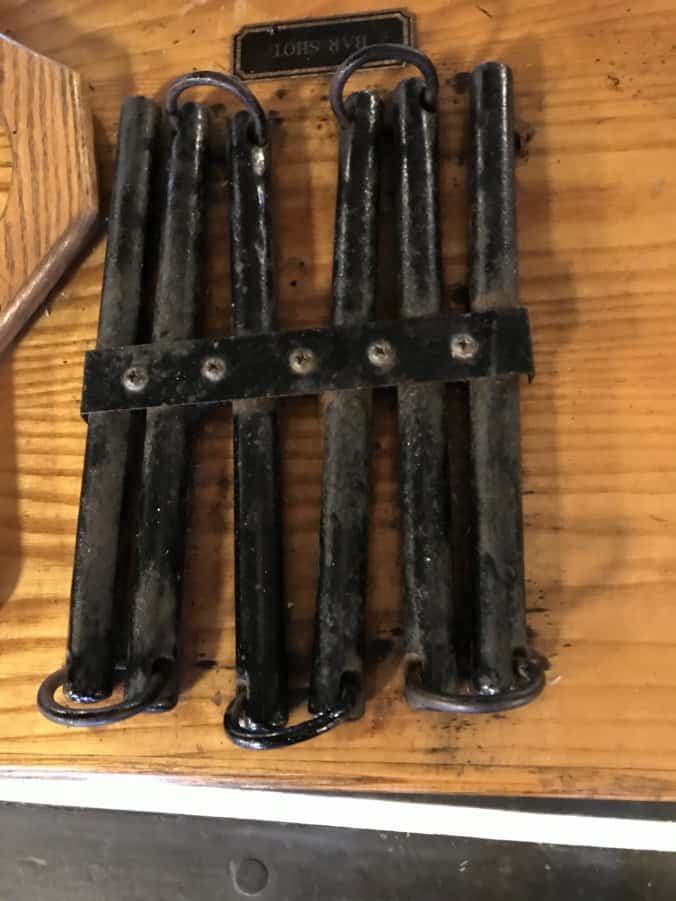 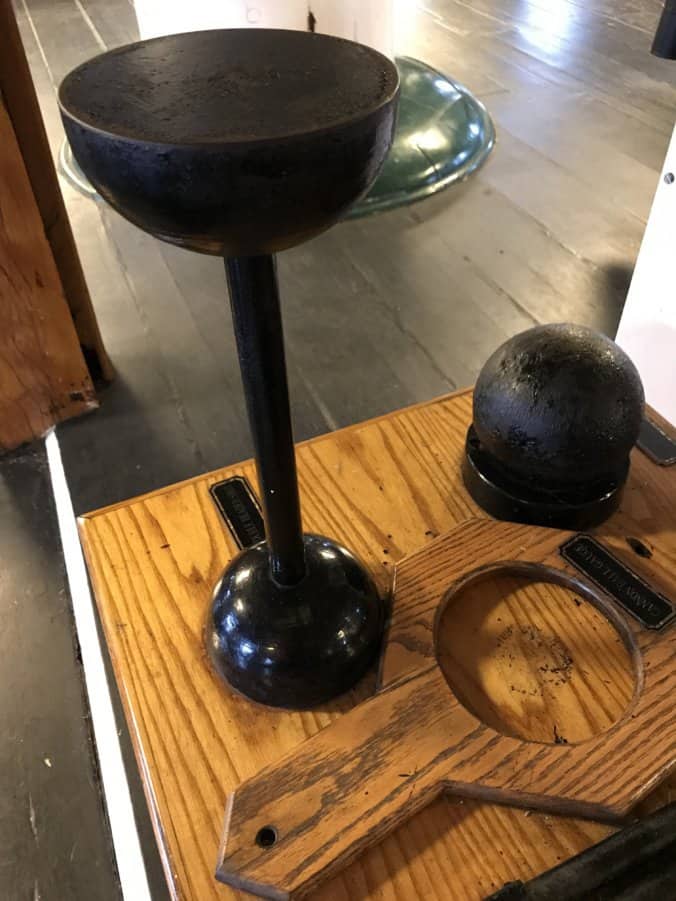 Designed to “open-up” during flight, or spin around, to cause maximum damage to the sailors on deck or the sails and ropes, also trying to cut-down the mast. 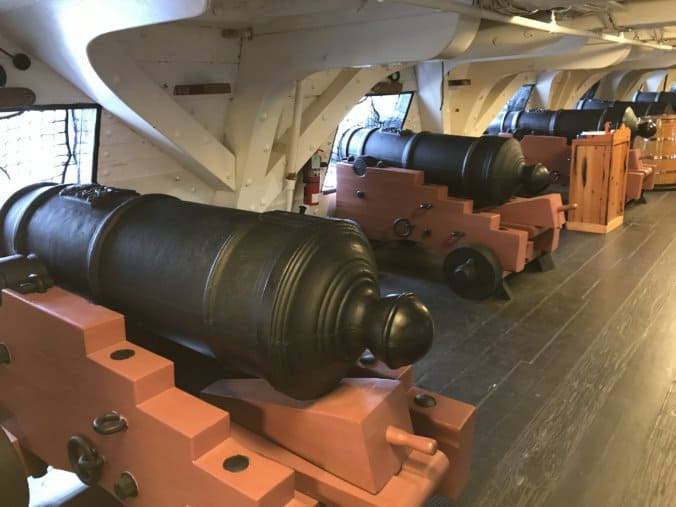 Another thing I did not know is that on this Gun-Deck as in the photo above, basically everything happened, (apart from the sailing and navigation and the sleeping, which was done on the two decks lower, in hammocks.) On this Gun-Deck, they cooked and prepared the food : 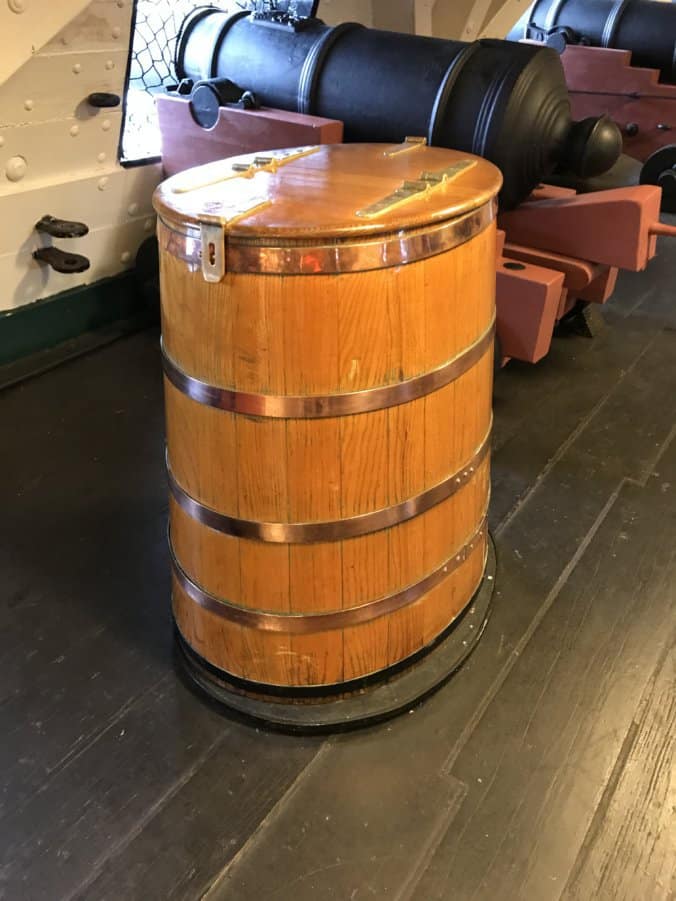 This barrel was used to wash the salt off the cured-meat before cooking it, on the stove in the photo below : 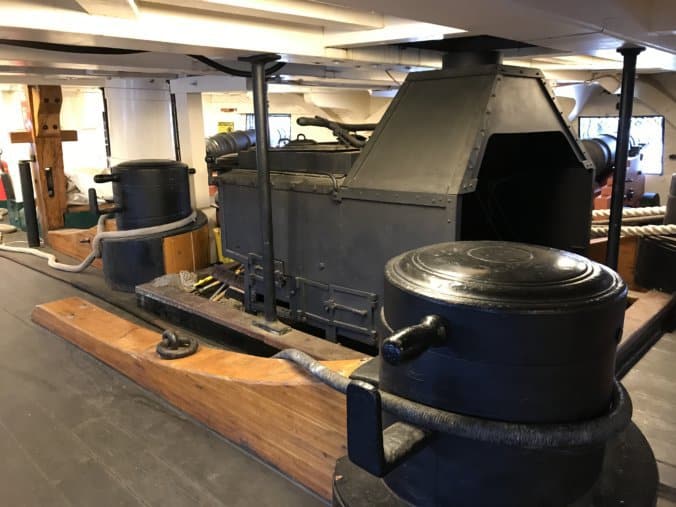 The black round thing on the right of the photo was used to pull the anchor up. 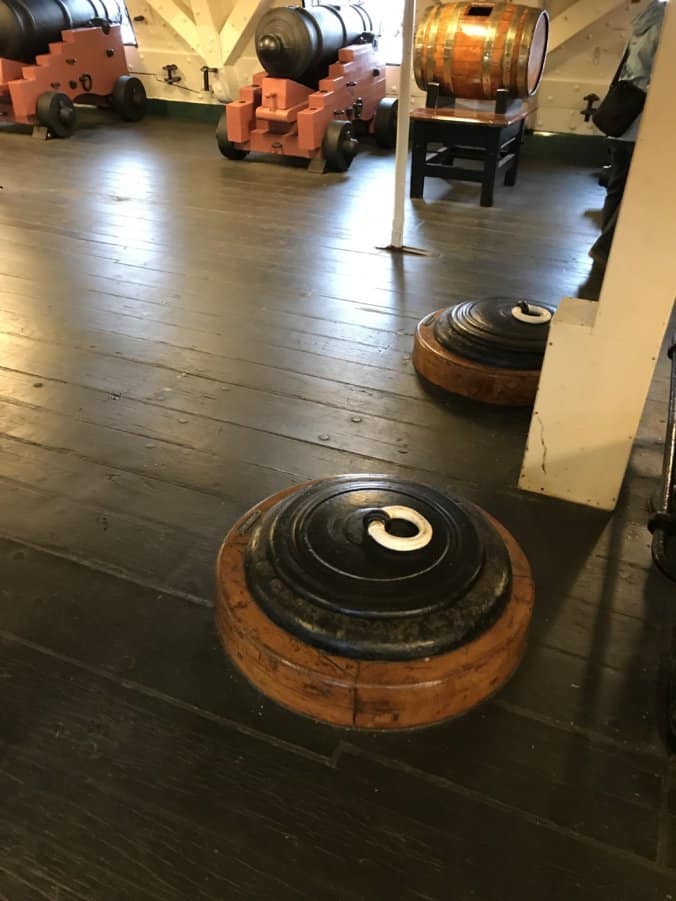 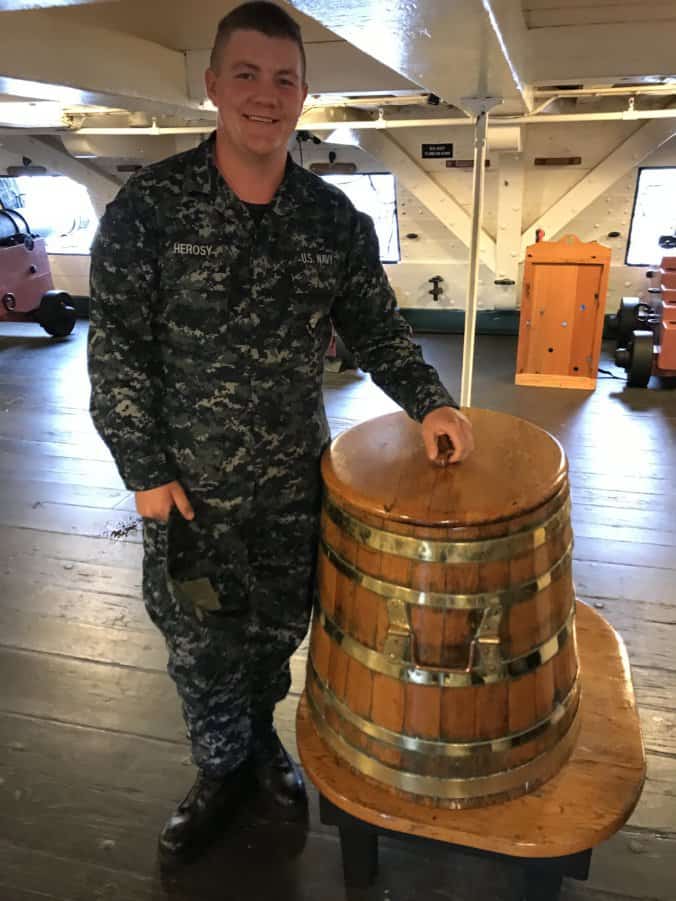 And now we get to the interesting part, why Dog (an ex-marine) wanted to see this ship, as this is basically where the Marine Corps started, on the ship were 450 sailors and 50 Marines, who in those days were like Marine Police who were responsible for handing out the Rum which was kept in the “coolerbox” above, or Grog-box as it was called back then. Each day everybody on the ship were lined-up and given their cup of Rum by the marines to drink, if you did not want to drink it you could sell it back to the ship for 6c, but it had to be drunk in front of the Marine and could not be taken away and given to your friend, for obvious reasons. Later these Marines also started Sniping (sharp shooting) when they got close to another ship and then they also became the “Landing Party” and so the Marines began. 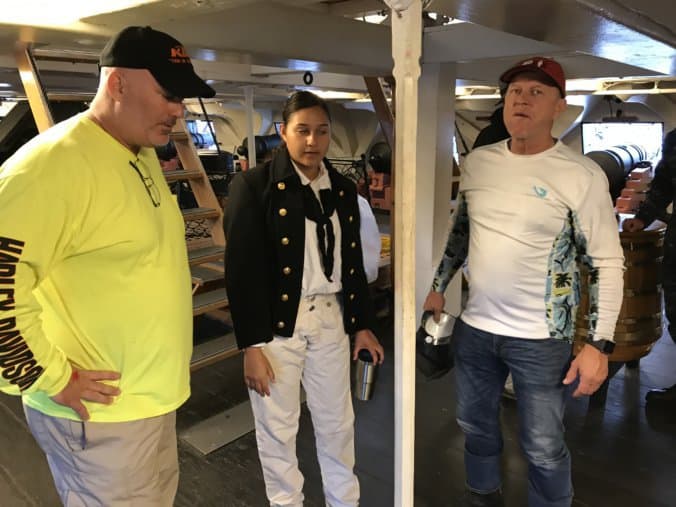 Take note of another hand-cranked winch below the sailor below which was cranked on this deck but turned the winch which was was used to load the ship using a crane on the upper deck, but “powered” from below manually. 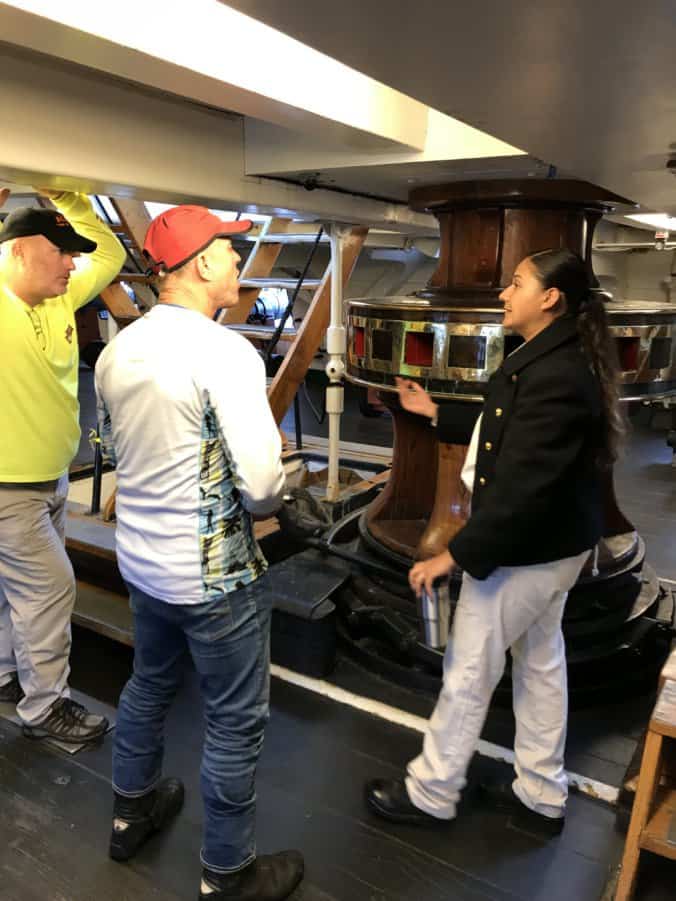 Then we got onto the  route for the day, the “1 North” and headed North. We stopped for lunch at this Diner, called Agawan Diner, another one of those Stainless Steel Type Diners. Here Angela is posing for a photo with Tex and Dog, she is the owners daughter, (her father is over 80 and was there manning the Cash register,) her father and hos two brothers started the Diner in 1940, but his brothers has now passed on but he is still there at the till every day. Angela is not just the Pretty Face of the Diner, this girl works, she managed all the tables not seated at the counter, about 36 people, about 16 tables. 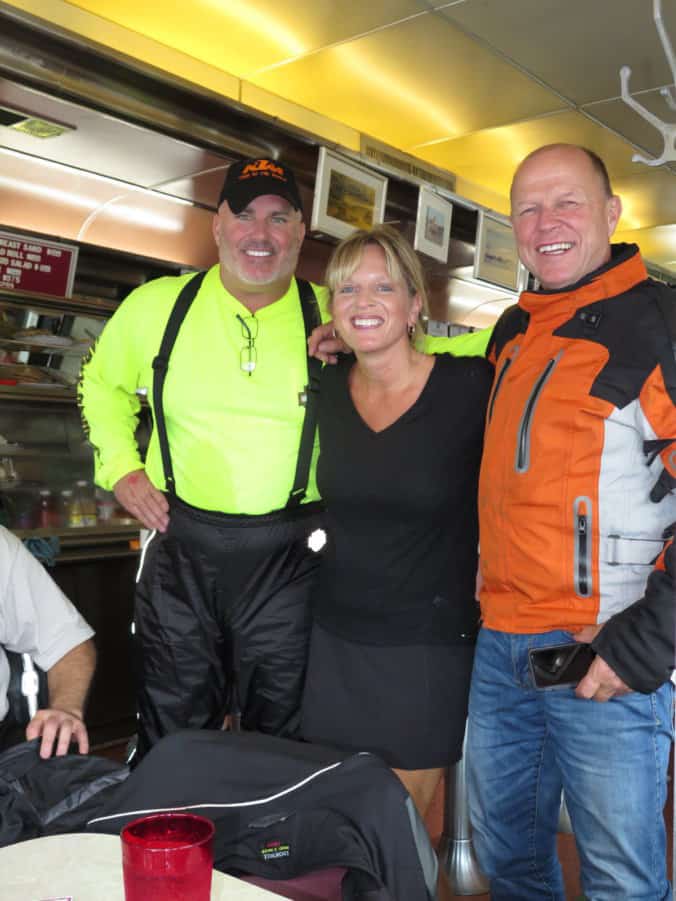 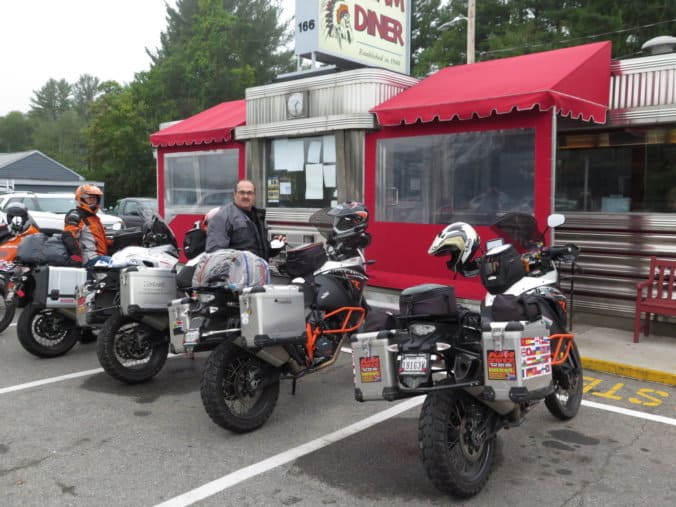 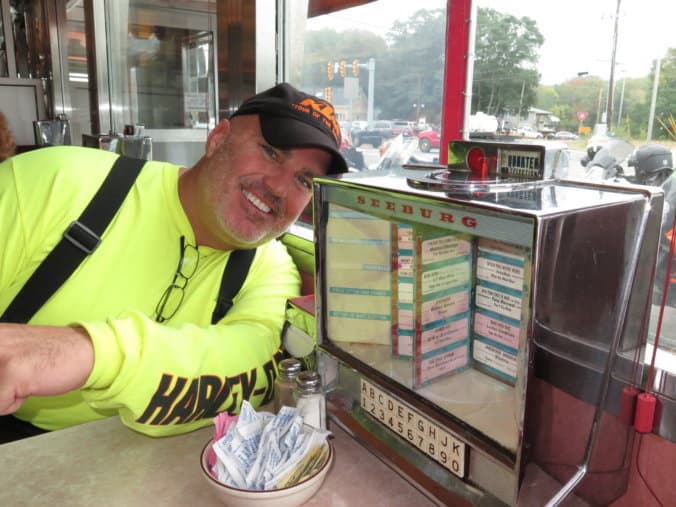 I had the Pastrami Sandwich with Coleslaw and Fries 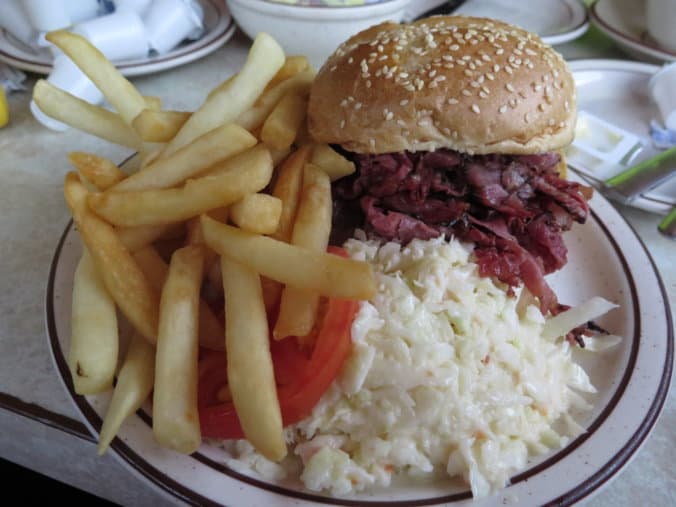 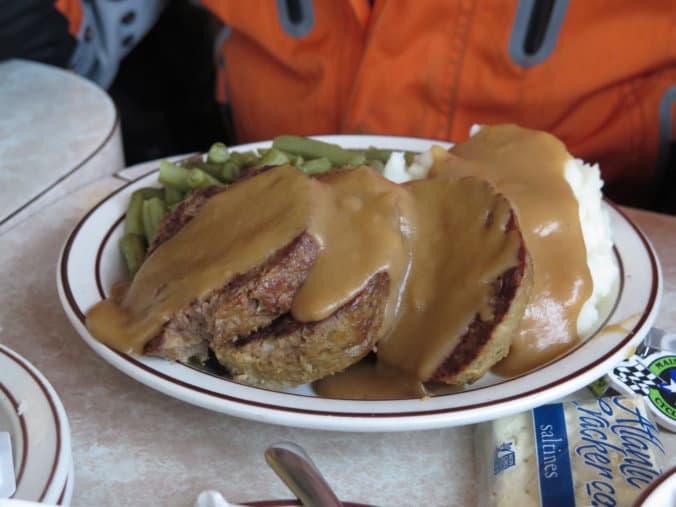 As we were inside the Diner Storm Jose’s weather hit mainland and the rain started bucketing down. We headed on the 1 North but then we got separated along the way in the rain, I stopped at a Cell Phoe Shop to try and get the Data Card I bought 6 days ago to start working, Tex took the wrong road and the police received a phone-call about three bikers riding irresponsible in the rain and they started chasing the perpetrators, for 6 miles before they caught them, one escaped and refused to stop (Rocky said he never heard or saw them,) but long story short :